Blu-ray Review: Criterion's ONE SINGS, THE OTHER DOESN'T, A Fitting Memorial To Agnes Varda

The director’s 1977 semi-musical ode to the power and pleasures of womanhood is perfectly supported by worthwhile features on the new Blu-ray. 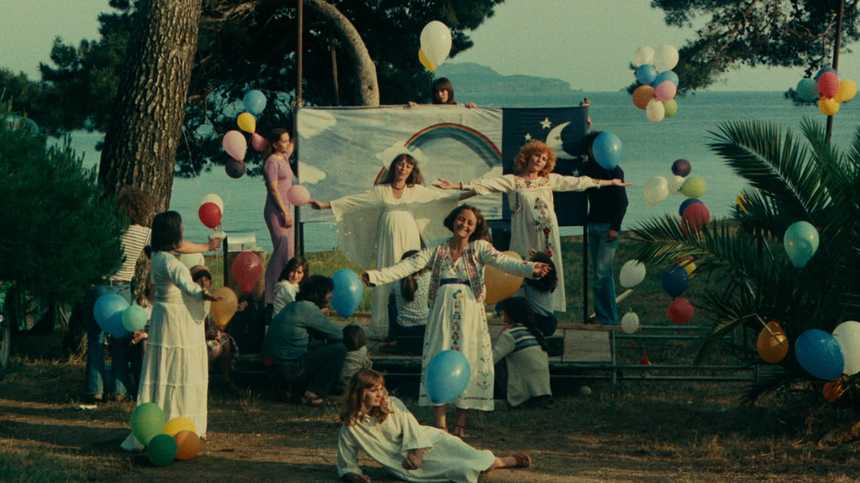 We lost Agnès Varda in March, at a time when -- albeit at the age of 90 -- she was only coming into the height of her popularity in the west.

Transitioning from under-discussed master of Left Bank filmmaking to bona fide icon of world cinema (that fringe! The cats!), Varda's recent passing made her career the premier collection on Criterion's newly launched streaming channel, and now the company follows through with a flawless package of Varda's 1977 film, One Sings, The Other Doesn't (spine #978).

We discussed Varda's career in detail in the April episode of my podcast. One Sings lands squarely in the middle of the canon of work: having established herself as a filmmaker for reasons that she always maintained were ambiguous even to her with 1954's La Pointe Courte, and having delivered a masterpiece with Cléo de 5 à 7, Varda worked steadily in documentary and fiction throughout the 60s and 70s while the feminist movement in France took increasing hold.

Written in the 70s before and after the birth of her son, Mathieu (who has a small role in the film as a toddler), One Sings, The Other Doesn't is the director's statement on her experience of that time, though she shied away from saying outright that the film was in any way autobiographical. She creates two characters (per the title). Pauline (Valérie Mairesse), who changes her name to Pomme, is a brash and passionate folk singer whom we meet as a disaffected teenager rebelling against her parents. Suzanne (Thérèse Liotard) is a cautious, inquisitive young mother of two who initially bonds with Pomme when Pomme helps her secure the money for an abortion.

Separated for ten years, the two reunite when Pomme has become a successful singer, and Suzanne's children are becoming teenagers. They live parallel lives, communicating by postcard as Pomme's adventures take her to Iran with a handsome Persian boyfriend, and Suzanne realizes to her surprise that a life of focusing on others hasn't entirely robbed her of her desire to prioritize herself, too.

Particularly through Pomme's music -- it would be a mistake to call the film a musical, as all of the musical sequences are diegetic, rather than fantasy -- Varda uses the stories of the two women to narrativize the concerns of the feminist movement between 1968 and 1975. Building on the early sequence around Suzanne's illegal abortion, a woman's right to control her own body is a frequent refrain, but Varda's touch is so light that the work feels closer to poem than tract.

One Sings is a fundamentally optimistic film; it closes on a shot of Varda's own daughter (as the now-adult daughter of Suzanne) and Varda's musing in voiceover that she will have it easier than Pomme and Suzanne did, in the world they helped build. Varda springs off Simone de Beauvoir's quote -- "one is not born, but rather becomes, a woman" -- to suggest the myriad pleasures, powers, and privileges of positioning one's self firmly and apologetically in one's womanhood, something that both Pomme and Suzanne need to arrive at in the film, rather than be gifted with it at the outset purely because of their sex.

I've been critical of some of Criterion's recent efforts with the special features on their discs, but with One Sings, The Other Doesn't, they nail it. Each of the pieces of accompanying material ties directly or indirectly to the themes and intent of One Sings and does a masterful job of teasing out the film's purpose, providing a rounded picture of Varda's artistic stance in the mid-1970s.

A 47-minute documentary film by Katja Raganelli, Women Are Naturally Creative, takes as its jumping-off point the filming of the final sequence of One Sings, The Other Doesn't, and overlays the footage of that shooting day with Varda's narration of how she made the decisions that went into the scene, before diverting to interviews with lead actresses Mairesse and Liotard, and a lengthy talking-head with Varda herself.

Plaisir d'amour en Iran is a 1976 companion short film to One Sings, The Other Doesn't, featuring Mairesse and Ali Raffi as (kind of?) their characters from the feature as they muse upon their love affair in Isfahan. The film commits the somewhat unforgivable sin of rendering as text some ideas which are left as visual poetry in the feature, but as the Iran sequences are some of the most visually splendid in One Sings, I didn't mind spending some additional time there.

Best of all is Varda's 1975 experimental short film, Réponse de femmes, an 8-minute collage of women and girls answering a question from a television program: "What is a woman?" It's loopy, playful stuff, but it gets its point across, and dovetails perfectly with One Sings, The Other Doesn't, in seeking to position womanhood as a substantial source of potential that extends beyond almost all the ways society has chosen to define it.

The Blu-ray package is led by the in-jacket essay, of course (in this case it's by Amy Taubin), but a delightful addition is a reprint of the press materials from One Sings, The Other Doesn't in booklet form, translated into English. The piece is playful and liberal-minded, as Varda, Mairesse, Liotard and others outline their histories and intentions with the film in a freestyle structure that makes the booklet seem enchantingly like Varda created her own 'zine for the film, which -- well, she would.

The result feels like one of the most complete packages Criterion has put together in years. The timing is devastating, but appropriate. One Sings, The Other Doesn't is a fitting tribute to the director's work, already well-represented in the collection and on the channel, with (hopefully) more to come.

Do you feel this content is inappropriate or infringes upon your rights? Click here to report it, or see our DMCA policy.
Agnes VardaCriterionthe Criterion CollectionThérèse LiotardValérie Mairesse