Blu-ray Review: MY BRILLIANT CAREER Is On Disc While The Criterion Channel Looms

Judy Davis is a boundary-breaking heroine in 1901 Australia in Gillian Armstrong’s debut feature. 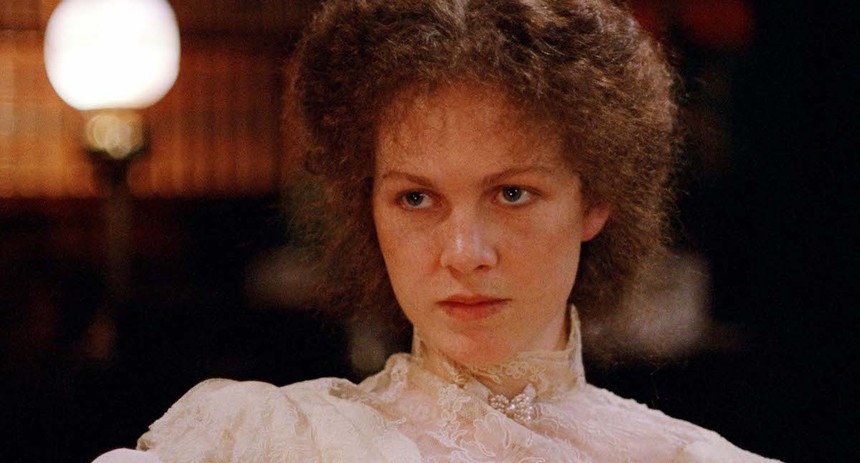 The era of the Criterion Channel is upon us, and for longtime collectors (like me), the calculation for our walls of Criterion spines is threatening to change. I could not have signed up for the Channel faster upon its launch on April 8, and I had already consumed four films before the end of my first 24 hours on the service.

I won't enumerate the myriad reasons physical media continues to retain practical advantages over streaming when it comes to bringing great films into your home. (If you've spent any amount of time on the internet in this decade, you already know them.) I will, however, admit that the threshold for what warrants a purchase vs. an evening surfing the Criterion Channel app has moved, and will continue to move.

Gillian Armstrong's 1979 feature, her first, was on the Criterion Channel at launch and hits shelves as a physical disc at the end of the month. Naturally, the disc offers a supplementary experience that the streaming service does not. There's a newly-recorded interview with Armstrong, who -- in an effervescent and forthright 25 minutes -- discusses everything from how student films, not classics of cinema, made her want to become a filmmaker, to Judy Davis' intense personal dislike for her performance in My Brilliant Career. There's also a commentary track from Armstrong, ported over from a previous DVD; and a new interview with the film's production designer, and an archive television interview with Davis herself.

None of these are on the streaming service, nor should (I think) they ever be. There's an interesting existential question for the Criterion Collection at the heart of all of this, an organization that made its name (first) on the detailed presentation of a canon of film classics at the highest possible quality, and (second) on nurturing those releases with "film school in a can"-style supplemental features for the interested cineaste who wanted to learn more.

Arguably, both of these pillars are irrelevant to the streaming platform, because if the last decade has proven anything, it's that a) the vast majority of streaming customers wouldn't notice picture quality if it smacked them over the head with their motion-smoothed plasma screens; and b) supplementals are a value-add legacy of the physical media era built to justify the higher-than-reasonable cost of those discs, and has failed to find any real foothold in streaming media.

You could argue that neither of these outcomes should hit the Criterion audience, who (one assumes) is more discerning than the average Netflix customer, but lacking access to my Time Stone at the moment, I won't make predictions.

This all resolves itself upon My Brilliant Career in only one important way, though: it is not, I think, a disc I would bother to buy on its own merits, if I'd already watched the film as part of my monthly subscription to the channel. It's everything the Criterion Collection does well in terms of picture, sound, and supplements; but not arranged around a film where I particularly needed any of it.

My Brilliant Career concerns a teenager in Australia named Sybylla (Davis), a wild-haired and equally-wild-spirited rascal with little patience for rules and even less for the presumption that she will, sooner than she'd like, have to marry in order to secure a financial future for herself now that her family has fallen into deep financial troubles. Anne of Green Gables collides with Sense and Sensibility (and a bit of Pippi Longstocking, to be honest) in Sybylla, whose mother describes her as plain, useless, and godless, and who herself would probably object only to the middle part: she knows she has a use, and suspects it's in the arts, though she hasn't worked out exactly what yet.

It's a tremendous performance from Davis, who turns Sybylla from a truculent adolescent into a veritable force of feminine power, all under the keen eye and strong sense of place that Armstrong brings to the picture. The film is marvellously lusty, to whatever degree such lusts might be unformed or confusing to its heroine; Armstrong presents Sybylla's love interest (Sam Neill) as unabashed eye candy, and trades the balance of the story on whether succeeding in a love match is enough for a woman like Sybylla. (Spoiler: it ain't.)

For all this, though, when My Brilliant Career was done, I found I didn't have much else to say or think about it, beyond the above. It was worthwhile listening to Armstrong discuss the film in the commentary and the video interview, largely because it was important for me to reacquaint myself with her trailblazing career now that a markedly belated surge in women directors like her is beginning to take root in the mainstream film industry.

Just for fun, I also compared My Brilliant Career's picture quality on disc to that on the streaming platform; naturally, the disc won out by a sizeable margin; colours are deeper and richer, whereas blacks are crushed on the streaming service and fine detail is lost in a subtle but noticeable haze of video noise. Noise on the disc is natural and earthy, artifacts of the film grain itself, thanks to the 4K restoration co-produced by Criterion and the National Film and Sound Archive of Australia.

Arguably the biggest advantage My Brilliant Career has over the Criterion Channel on disc is the inclusion of Armstrong's short film, One Hundred A Day, which she mentions was the reason producer Margaret Fink became interested in her, and ultimately decided to give Armstrong the feature project. One Hundred A Day is set in a shoe factory in the 1930s, in the aftermath of a young woman getting an illicit abortion. Like many student films it feels slightly incomplete, but there's no arguing with Armstrong's ambitious and vibrant use of camera to create tension and tell her story. And no, it's not on the Criterion Channel.

Finding these niches for each product offering, so that Criterion does not end up in competition with itself, is key to the strategy going forward from here on these two divergent roads. The release of My Brilliant Career is a good test case for where your own collecting threshold lies (and six months ahead of Disney+, which will see us facing similar questions all over again). If a film is still more to you than just "content," you'll probably be sticking with discs; but the scale and ease of the offering on the Channel does, I'll admit, have me very happy so far.

Do you feel this content is inappropriate or infringes upon your rights? Click here to report it, or see our DMCA policy.
Gillian ArmstrongJudy DavisThe Criterion Collection