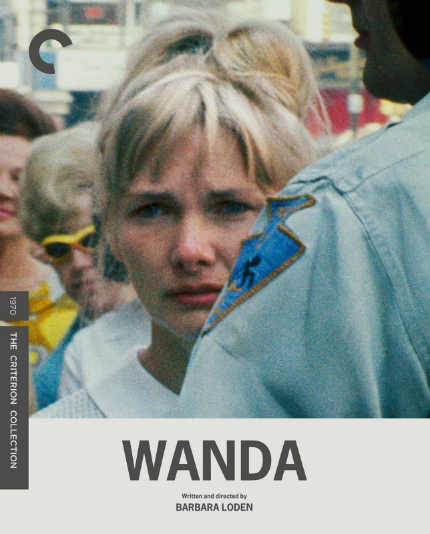 Have you had a bad day recently? Wanda has had a bad life.

Just like Wanda herself, Barbara Loden's directorial debut gradually coalesces into a howl of desperation that, nearly 50 years after its premiere, remains cutting and insightful. Wanda is a rootless, restless creature, a woman who is convinced she is 'no good' as a wife or as a mother to her two young children.

We take her word for it because, immediately after her divorce proceeding, Wanda is on the move, with no stated destination in mind. By her actions, it's apparent that she wants to get away, somewhere, anywhere, away from the bleak Eastern Pennsylvania mining town where she has been living. Soon enough, she hooks up with Mr. Dennis (Michael Higgins), a distinguished-looking gentleman with a determined air. Rather than 'meet cute,' they meet rough; she enters a bar, which he is in the process of robbing.

As they flee together, more as a matter of convenience and opportunity than anything else, the film itself gains momentum and intimacy. Wanda and Mr. Dennis don't grow one bit closer in any way that truly matters. Sure, Mr. Dennis displays an occasional touch of thoughtful care, and Wanda grows somewhat less diffident and more confident about life in general. But they don't connect on a level deeper than their sexual unions, even as they share a series of motel rooms. It all leads to an shattering end.

Barbara Loden, an actress who had made her mark in Elia Kazan's Wild River (1960) and Splendor in the Grass (1961), as well as a handful of television shows, found a story that she wanted to tell in the 1960s. She wrote a script, eventually tumbled onto a source of financing -- after asking everyone she knew, 'Do you know any rich people?' -- hired cinematographer/editor Nicholas Proferes and two other crew members, found the locations, auditioned local residents as first-time actors, adjusted scenes to fit within the limitations of the day players, and starred in the lead role opposite her friend, Michael Higgins, the only other experienced actor in the cast.

Newly released by Criterion on Blu-ray, Wanda starts on such a low, even keel that, frankly, I needed a cup of coffee to keep watching. How foolish on my part! (Not the caffeine, but the readiness to disengage from the material.) In fact, the opening sequences are deceptive, in that they suggest a film to be admired only for its integrity, as opposed to the story that Loden has to tell.

Indeed, Loden was a lone voice crying out in the wilderness, in that female filmmakers could not even earn the right to make a film in Hollywood, unlike their male counterparts. No path existed for women to do so.

Just over a year later, Roger Corman produced The Student Nurses, directed by Stephanie Rothman, for his new company New World Pictures, which was financially successful. If Barbara Loden wanted to direct exploitation films, maybe she could have done so. But not more films like Wanda. She was more interested in telling her story than in making money for a studio or for an independent producer like Corman.

Criterion's Blu-ray edition presents a new 2K restoration of the film, which was shot on 16mm with a monaural soundtrack. The transfer looks cleaned up, but the rougher edges have been retained. I found the intentionally grainy picture quality to be distracting initially, but as I got caught up with the story and the characters, the visual elements became less important to my enjoyment and appreciation of the film.

The Blu-ray includes an audio recording of Loden speaking to students at the American Film Institute in 1971. For about 60 minutes, Loden talks freely with a moderator and then with students about how she came to make the film, the challenges she faced, and why she would never choose again to star in a film that she was directing. Some of the questions asked by the students in the (likely) classroom setting are muffled and difficult to hear, but by Loden's answers, it's easy enough to figure out what was asked.

Also from 1971, two segments of The Dick Cavett Show, running about 14 minutes in all, feature Loden explaining her film's story and, after two brief scenes are shown, talking about her innovative approach to shooting inside a moving (real) car, among other things. The other guests, journalist Jimmy Breslin and broadcaster Howard Cosell, also chime into the conversation; Breslin, especially, as he mansplains about a movie being made from one of his books.

In 1975, Loden directed and starred in The Frontier Experience, described as "a short educational film about a pioneer woman's struggle to survive." That is an accurate description of the straightforward narrative; running about 25 minutes, the short is fine and simply told. Loden again worked with cinematographer/editor Nicholas Proferes. Joan Micklin Silver wrote the script; that same year, she make her feature directorial with Hester Street, which she also wrote.

Directed by Katja Ragnelli, I Am Wanda (1980) is a 62-minute documentary that covers Loden's life before she entered the entertainment business as a show girl, how she became an actress, her long-term relationship with Elia Kazan, her relationship with her children, and her rehearsals with actors for an off-off-Broadway stage production. A certain sense of doom is perhaps inevitable.

The interview with Loden was conducted in June 1980; unbeknownst to the filmmakers, Loden had been battling cancer for more than two years already, and her condition had become terminal. Barbara Loden passed away in September 1980; she was just 48 years old.

Finally, the package includes a recent trailer for the film and also an excellent printed essay by film critic Amy Taubin, who first saw Wanda in 1972 and provides knowledgeable cinematic and historical context.

Summing up: Recommended. Not only an essential film from my favorite film decade, and the rare feature directed by a woman in that period, Wanda is a vital surge of energy that peels back the layers of a woman in crisis who has been ignored by America.

The Blu-ray is now available from Criterion.

Do you feel this content is inappropriate or infringes upon your rights? Click here to report it, or see our DMCA policy.
Barbara LodenBlu-rayCriterion CollectionMichael HigginsWanda