Review: HALLOWEEN, Michael Myers Is Back For Laurie Strode In This High Profile Retcon 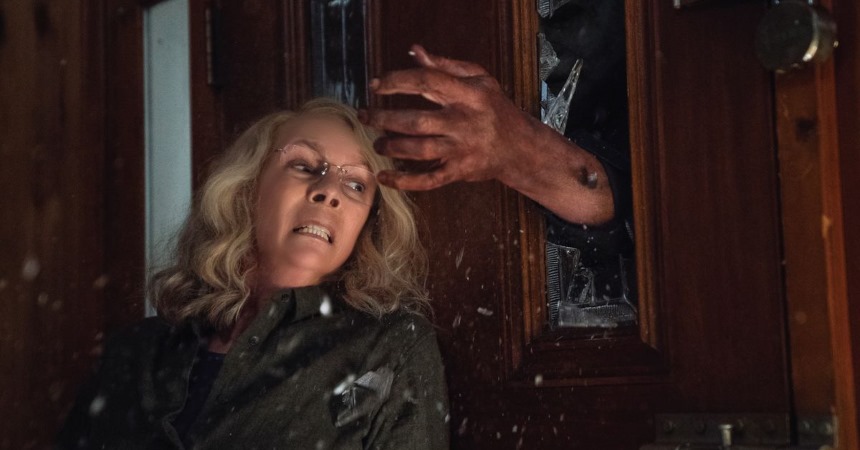 Forty years after that immortal Halloween night in 1978, the butcher of Haddonfield returns to finish the job he started in David Gordon Green's Halloween. The co-writer and director reunites the original stars of John Carpenter's iconic slasher cycle starter in bringing back Jamie Lee Curtis as Laurie Strode and Nick Castle as the dead-eyed psychopath, Michael Myers, otherwise known as The Shape.

This semi-reboot of one of the '80s most successful horror franchises brings new blood into the mix in the form of the director as well as one of his co-writers, Danny McBride (Eastbound & Down) and producer Jason Blum, who is behind some of the current decade's most successful mid-budget horror success stories like Get Out and the Paranormal Activity series. The combination of new and old brings fresh possibilities that often pay off, but also occasionally hew too close to the expected to make this latest iteration of the Michael Myers saga one worthy of the future classic title.

It is 2018, and a pair of investigative journalists from a British podcast find their way into the story of The Babysitter Murders, a clever Easter Egg dropped for the hardcore fans who know that this was one of Carpenter's original working titles for the first film. They check in on Michael Myers, currently being held at a medical facility for the criminally insane.

Guiding them is Dr. Ranbir Sartain, a surrogate for Donald Pleasance's iconic performance as Dr. Loomis, except where Loomis regarded Myers with great caution, Sartain sees him as a potential method for unlocking the beast in all of us, if only he can get through. When Myers' planned prison transfer on the exact fortieth anniversary of his crimes goes awry, the town of Haddonfield, Illinois once again finds itself on the receiving end of a massacre.

One person saw it coming, however, Laurie Strode, the original final girl, played once again by Jamie Lee Curtis who returns to the series for the fifth time, but with a twist. This time around, Strode wants to be ready for him, a kind of Haddonfield version of T2's Sarah Connor, and the fight will be a lot more fair than it was in the past. Michael is out to settle old scores, but the Strode family - Laurie and her daughter and granddaughter, Karen (Judy Greer) and Allyson (Andi Matichak) - aren't going down without a fight.

David Gordon Green's version of Halloween is a complete retcon of the series that sets itself up as a direct, long delayed sequel to the 1978 original. As such, the film cleans up the divergent canonical confusions that arose between the first two parts, then the fourth through sixth parts, and finally the seventh and eighth parts, in which Curtis made her first appearance since Halloween II. In this film, Michael has been locked up ever since 1978, which the filmmakers feel the need to remind us of frequently.

It's an interesting tactic, and an obvious set up for a potential all new Halloween timeline should it work out. The result is often quite good, but the writers do feel the need to needle the audience with jokes about the goings-on in the alternate Halloween timelines, lest we forget that there is 40 years of history leading up to this point with the character.

The result is a film that is remarkably successful at delivering the kind of horror thrills that Halloween fans have grown accustomed to. The film is nothing if not brutally violent. Green's Halloween doesn't shy away from the blood and gore, in fact, many of the kills in this installment of the series are among the most gruesome Myers has ever delivered. Fatal stompings, lots and lots of stabbings, and innumerable snapped necks all point toward a writing team who understand what a modern audience expects.

If there is an issue with Halloween, it is that it delivers with almost too perfect a rhythm. There are precious few surprises once the film finds its feet and presents its basic premise. Everyone you think is going to die, dies. Everyone you hope is going to live, lives. Anytime you're pretty sure someone's going to get stabbed, you can pretty much guarantee that's exactly what's going to happen. It's all done with an impeccable sense of timing and an beautifully artistic touch that rivals anything the series has accomplished since the original, but it's in the service of a film that is largely predictable apart from a few crucial surprises.

Fans of the series, and fans of gory slasher horror as it exists these days will be thoroughly satisfied with Green's approach to the material. Many of the best kill sequences as executed using practical effects, and those that are augmented with CG are transparent enough the the shock still hits in a gleefully depraved way.

The film recycles and remixes much of Carpenter's iconic score which is both good and bad. It's excellent, because as he's proven with several recent sold out world tours under his belt over the last five years, John Carpenter is a very talented musician who understands what it takes to manipulate the audience through music. However, the music has become so iconic, that it's hardly scary anymore, using the original score is like telegraphing the killer's next move to the audience, which is another element that saps some of the surprise from the experience.

All that being said, Halloween is among the most well crafted of the series. The film is beautifully shot, well acted even in the smaller parts, and executed in such a way as to please both hardcore fans and newcomers who may only know Halloween or Michael Myers by reputation. David Gordon Green has reframed the Halloween series in a new and interesting way that is sure to sate the bloodlust of the hardcore fans who may still be recovering from the disappointment of installments past. It's a nasty film that doesn't shy away from giving the audience what it wants to see, I just wish that it was more interested in surprising than appeasement.