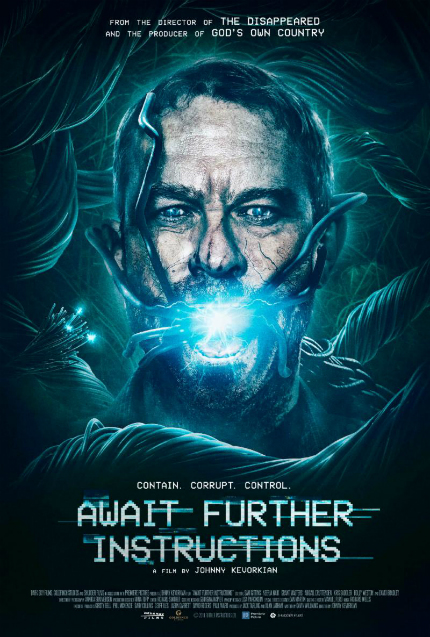 A British family is confronted with their own worst fears during the holidays. Locked in their own house, they must rise to the occasion or cave in to the pressures of conformity.

In Await Further Instructions, the Milgram family has gathered, reluctantly, for the Christmas holiday. After several years away, eldest son Nick (Sam Gittins) has returned with his Middle-Eastern girlfriend Annji (Neerja Naik). Nick's mother Beth (Abigail Cruttenden) is welcoming, but her warmth is countered by the chilly reaction of Nick's father Tony (Grant Masters), a stiff, overbearing man with anger issues who still harbors tremendous ill will toward his son's rejection of his values.

Nick's grandfather (David Bradley, Game of Thrones) is even worse, a nasty and smug fellow who makes snide remarks about Nick's sexuality and insulting insinuations about Annji's heritage. Nick's younger sister Kate (Holly Weston), who is quite advanced in her pregnancy, arrives to further the discomfort; a casual comment reveals her racism. Her boyfriend Scott (Kris Sadler) is entirely in her sway, and reacts favorably toward Tony's looming command of the family.

A happy family reunion, this is not.

The original script by Gavin Williams adroitly sets up the conflicts to a point of early combustion. Nick decides he can take no more, so he and Annji prepare to flee the next morning, only to discover that the house has been absolutely locked down, as though entirely covered in some kind of weird cement, and there is no escape. All forms of communication are now blocked. The family, already emotionally strained from a single night of domestic in-fighting, is left to their own devices.

Then the television starts talking to them.

Not literally, but in the form of a message that appears on the television screen. What choice do they have, but to await further instructions?

The balance of the film becomes ever more claustrophobic and chaotic. Director Johnny Kevorkian, who has made several short films, as well as his feature debut The Disappeared (2008), takes full advantage of what is, upon reflection, a rather modest-sized house. Cinematographer Annika Summerson expertly controls the lighting to always match the rising emotional temperature of the characters, and film editor Richard Smither contributes mightily with a good sense of logic and clarity.

The performances are uniformly excellent, as the actors capture the complexity of people who do not become the heroes they want to be, or imagine themselves to be. Each one, it could be argued, believes they are capable of far more heroism than is realistic.

They reach for the stars, but flame out before they get there, doing damage to others around them. Await Further Instructions has a very good premise that builds in pressure and intensity, leading to a very strong conclusion, yet it's the characters who, especially, resonate. They are not noble at all, really, which is probably what makes them so familiar and recognizable.

It's kind of scary.

From Dark Sky Films, Await Further Instructions is now playing in select theaters in the U.S., and is also available to watch via various Video On Demand platforms.

Do you feel this content is inappropriate or infringes upon your rights? Click here to report it, or see our DMCA policy.
David BradleyGrant MastersJohnny KevorkianNeerja NaikSam GittinsUK