Venice 2018 Review: THE NIGHTINGALE Sings Out In Dark Rage

With her sophomore effort, filmmaker Jennifer Kent has tapped into something much, much darker. 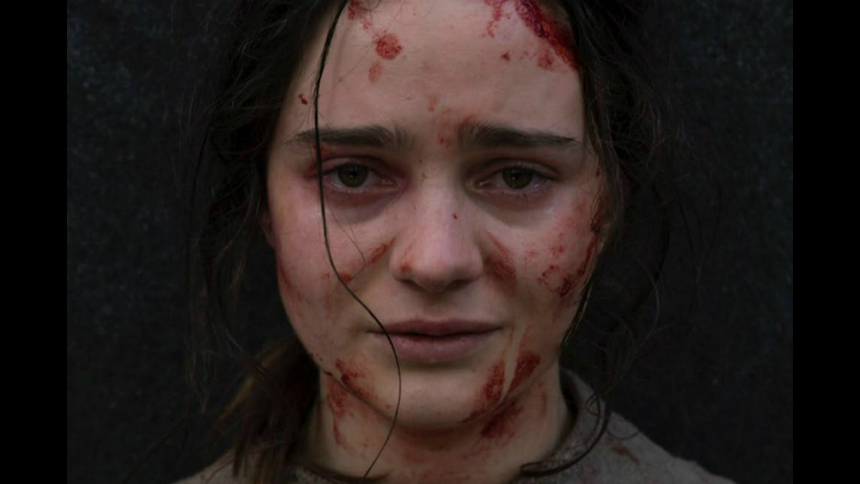 Following the breakout success of her directorial debut The Babadook, you could be forgiven for thinking that Jennifer Kent has a bit of a dark side. Both pyschologically sharp and stylistically haunting, this film definitely tapped into popular culture's inner demons. But with her sophomore effort, The Nightingale, it really seems like the director has tapped into something much, much darker.

Even though Kent has shifted from horror to period drama, I would definitely describe The Nightingale as an experience so bleak that I am still haunted by it. We're talking 12 Years A Slave levels of bleak, and I genuinely think it proved too much for me, if I am honest. But at the same time, I suspect that the process of writing this review will make me realise how necessary Kent's latest movie is.

Comparisons with Steve McQueen's Oscar winner are definitely appropriate, because The Nightingale carries out a very similar mission to exorcise the horrors of the past as that biopic did - only this time Kent is exposing the horrors committed by the British Empire in Tasmania. Now, I'm a big fan of McQueen's adaptation of Solomon Nothup's autobiography, and found it incredibly devastating, but there's something about Kent's period piece that I just couldn't get on board with. I think that might be because the film contained a rage so potent that, at best, it made me deeply uneasy.

I mean, initially, The Nightingale opens up pretty lightly. The camera offers its first salvo with a shot of a group of "the sorriest soldiers every to have sullied the British Army." They all stand to attention, right there before us, in some small, forgotten part of Tasmania, and the rag-tag band of sloppily dressed ruffians seems unable to follow even the most basic of orders. So, if anything, it's almost as if the motley crew we meet is more laughable than anything else, at first.

In a thick northen accent, sounding for all the world like Sean Bean in Sharpe, a certain Lieutenant Hawkins (Sam Claflin) berates them in a dark, navy-blue trenchcoat for being such a shit show. And soon after the soldiers fall in, they set about to drinking, where it transpires amongst their revelry in a small tavern that Hawkins is actually under scrutiny from a high-ranking, visiting official.

But barely five to ten minutes in, this is where Kent starts hitting you with the near-constant misery. First, The Nightingale focuses on the plight of convicts in Tasmania - in particular, that of Irish convicts. The main character Clare (Aisling Franciosi) and her husband Aidan have been shipped from Ireland as a punishment, and now they find themselves entirely at the mercy of this thuggish pack of redcoats.

Clare is the "songbird" who gives The Nightingale its title, and she's forced into uneasily entertaining the soldiers by performing sweet ditties from home. Fans will recognise Franciosi's gloomy glances from the BBC's The Fall and Game of Thrones, and her dark, expressive acting proves ideally suited to communicating the nervous horror of a young woman who has an entire platoon of leery men lusting after her in this film. Soon this terror ramps significantly, too, as the unrelenting Hawkins violently rapes her in front of a raging fire.

From this hellish moment forth, The Nightingale never really comes down from its perch of absolute rage, and the film transforms into what can only be described as a two-hour-long sledgehammer bearing down on any sense of wellbeing you may have previously had. What follows is a rapidly spiralling revenge tragedy that plays out across the vast Tasmanian out-back, drawing everything from child killing to brutal racist murders into its melee.

Indeed, as Hawkins sets out north in search of a promotion, and a deeply damaged Clare chooses to chase him, suffering local aboriginies repeatedly get sucked in. Constantly peppered with racist slurs like "black dog," two native guides called Charlie and Billy get pressed into helping the warring parties make their way north, and the deeply inhumane treatment both (as well as other aboriginies) receive painfully sketches out the horrors of the past for us in blood.

Billy, whose indigenous name is blackbird, becomes particularly significant to the story, and is probably the second person to play a part in shaping its title. With both Billy and Clare finally installed, Kent soon sets about showing us that the wrongs that the Irish and Aboriginies faced under the British were not that dissimilar. Of course, she doesn't commit the faux pas of placing them on exactly the same footing, because Kent does show how even the most abject of convicts, like Clare, could often be complicit in furthering the mistreatment of the indigenous people. But in terms of a process of suffering under colonialism, the similarities certainly become evident.

Once partnered up, these two tortured songbirds fill The Nightingale with songs of the oppressed, and they soon they agree to rain down justice on their transgressors or die trying. I personally found the duo's songs pretty beautiful and moving, but again what you see in this movie still made me feel very uncomfortable. In particular, I was disturbed to see the only female director in the 75th Venice Biennale's main competition still creating scenes of violence and sexual assault that felt so similar to those that male directors have been spouting for decades.

Obviously, there's no reason why the work of a male or female director should really be different, nor should Kent have to represent all women just because she's the only female director. But there was definitely something that felt weirdly facile and repetitive about the rape scenes and murders in The Nightingale. Whilst Kent's songbird is in no way a helpless victim, the movies scenes definitely contribute to an uncomfortably common prevalence of images of women being victimised in culture - something you'd hope she would avoid.

Of course, a counter argument is definitely that this is just art reflecting life, as violence against women is certainly an awfully prominent feature of the world we live in. And despite my grievances with how repeitive violence felt, I think seeing this film as art reflecting life is an important part of unlocking The Nightingale. The intense feelings of distaste and horror that Kent so skilfully builds is absolutely the point.

The Nightingale is not a film that has been made so that people can feel comfortable. It is a dramatic manacle constructed entirely to force you to feel and confront the horrible realities of colonialism until you can no longer ignore it. And as such, this movie is a real success. What's more, as a film coming from an Austrialian director, with support from Screen Australia no less, you cannot help but feel that this is an incredibly important instance of shots fired by Kent. A bold step that definitely comes at an important time when Australia is scrutinising its past with fresh eyes.

In terms of showing the sheer nastiness of colonialism, then, The Nightingale completely sweeps away the efforts of Baz Lurhmann's Australia and Warwick Thornton's Sweet Country. Rising to the top of a very talented new wave of cinema coming out of Australia in the last few years, Kent has produced a drama that isn't as good as Justin Kurzel's The Snowtown Murders, but it is similar in its lasting effect of feeling like you've been hit in the emotions by the butt of a rifle.

The irony is that the brute force of The Nightingale actually acted like some kind of disarming chromotography on critics last night. In a semi-terrifying way that I have rarely witnessed before, several hundred critics actually broke out into spontaneous applause last night when one of this movie's most detestable characters finally gets killed. As weird as that is as a reaction, it's certainly testament to just how much Kent's film gets under your skin.

Except, in what can only be described as a much darker turn of real-life events, some critics then even applauded when an aboriginal character meets his fate seconds later. It was like some surreal demonstration of exactly the kind of cruel, colonial unthinkingness that The Nightingale was attacking. And it gets worse! If you were in any doubt as to how unhealthy a lot of transgressions directed at women are, an Italian critic (who seems to go by the name Sharif Meghdoud) acted swiftly to remind us by shouting, "Vergognati puttana, fai schifo," (translation: "Shame on you, slut. You're disgusting") at the end of the film.

The journalist has since piped up to say that his actions were "deplorable," and do not reflect his media outlet, but his retraction on social media definitely still suggests a real blindness as to why his behaviour was quite so inappropriate. Somehow, the screening managed to serve to be a real reminder of exactly why Kent's mission is so important. I honestly don't know if I would watch The Nightingale again, but if you accept the movie on its own terms and for its own intentions, it is certainly a very important and talented achievment.

“I’m going to show my face and take responsibility. I was the man who, last night, at the press screening of Jennifer Kent’s The Nightingale, shouted a deplorable insult using her name. To avoid any kind of speculation on what I said, I will repeat it here: 'Shame on you, slut. You’re disgusting.' A regurgitation that came from the mouth of someone who was not thinking about what they were saying or the relative consequences. Typically speaking, I am not against whistling and insults at the end of a screening, but my actions yesterday evening were intended to condemn [Kent] for her the extemely explicit and offensive style. First of all, I would like to apologise to all the people who were offended by my actions, to the director Jennifer Kent - whom I wish a splendid career – to the Biennale di Venezia and the festival directors Paolo Baratta and Alberto Barbera for the bad impression I have given of the festival on an international level. I wish to specify that my actions represent me, and only me, as a total idiot, and does not reflect the internal apparatus of the italian outlet to which I am attached.”

Do you feel this content is inappropriate or infringes upon your rights? Click here to report it, or see our DMCA policy.
Aisling FranciosiAustraliaBaykali GanambarrJennifer KentSam ClaflinVenice 2018Venice International Film Festival