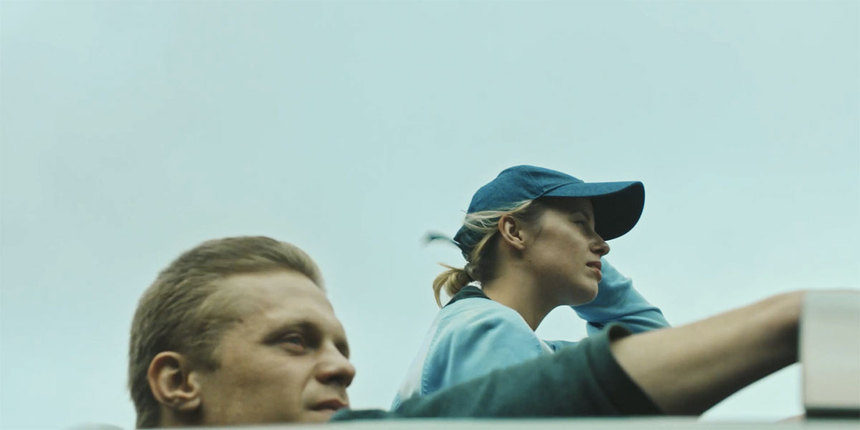 Upon reading a plot description of Summer Survivors -- the debut feature by Lithuanian filmmaker Marija Kavtaradze -- one may imagine a quirky indie comedy with touches of the absurd. While the film does have its share of lighthearted, funny moments, there is a steady vein of wistful melancholy running through it from frame one.

Indre (Indre Patkauskaite) arrives at a small psychiatric hospital, hoping to work with one of the esteemed doctors there. Although she is interested in working with a biofeedback machine, and not actual human beings, she winds up being asked to transport two patients to the seaside town of Palanga (on the opposite end of the small country). She protests, but is pressured into the task. Accompanying her on the trip is Paulius (Paulius Markevicius), a young man with bipolar disorder; Juste (Gelmine Glemzaite), a young woman recovering from a suicide attempt; and a kindly older nurse.

Much of the comedy stems from Indre's awkwardness with the patients, whom she is constantly afraid will have psychotic episodes, or try to flee. Paulius and Juste, in turn, use self-deprecation to poke fun at their tightly-wound escort. Every so often, though, the magnitude of their situation -- and the mental illnesses with which they are constantly dealing--threaten to overwhelm them, and quash their blossoming flirtation.

Director/writer Kavtaradze has an assured stylistic sense; she and DP Laurynas Bareisa have crafted a dreamy, airy aesthetic that compliments the mood of the movie and its subject matter. The camera has a light, unmoored quality, often drifting higher above the actor's heads than expected, or peering through heavily reflected surfaces. These visual metaphors are not difficult to decipher, but they aren't intrusive or overt either. They are flourishes that further the story and its themes, as well as being pleasing, or interesting, to look at--an accomplishment that's all the more impressive given that Summer Survivors is the director's first feature.

Kavtaradze also displays immense empathy for her characters through her filmmaking. She describes the film as a "love letter" to those suffering from mental illness, and that can be seen and felt in every scene. The insensitivity expressed by peripheral characters (who otherwise seem to be kind people) when trying to speak to the topic of mental health doesn't feel exaggerated. Casual, harmful language like "crazy," or "in the loony bin" is still tossed around in even the most enlightened of communities. Often, the people who seem most 'normal' at first glance, like Paulius and Juste, are left feeling pressured to keep their internal struggle a secret.

The more films there are like Summer Survivors, the more these stigmas will steadily begin to dissipate. Happily, the film isn't just a hollow method of delivery for its message. It's a genuinely moving, skillfully executed cinematic experience, marking Kavtaradze as a talent to follow.

Do you feel this content is inappropriate or infringes upon your rights? Click here to report it, or see our DMCA policy.
europeanindielithuanialithuanianMarija Kavtaradzemental healthmental illnesssummer survivorstifftoronto 2018