Writing-directing team Hélèn Cattet and Bruno Forzani try something of an experiment with their third feature. 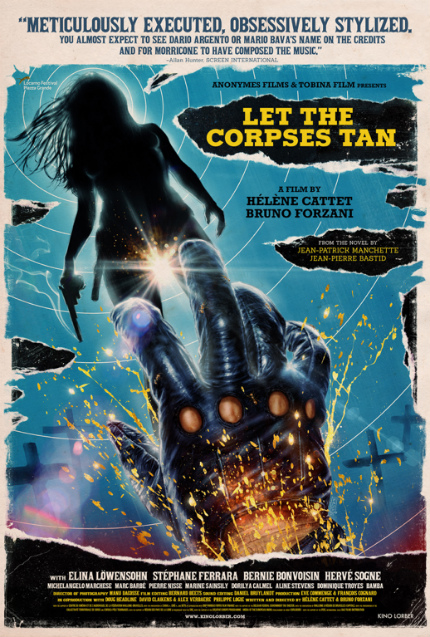 Writing-directing team Hélèn Cattet and Bruno Forzani burst onto the genre film scene in 2009 with the highly original Amer, a giallo-inspired experimental horror/thriller about different ages of one girl's life. Their second feature, The Strange Color of Your Body's Tears, went even further into mystery and strangeness in a more obscure story. Their third feature, Let the Corpses Tan, is something of an experiment for Cattet and Forzani, in that it comes from an original novel by Jean-Patrick Manchette. The result of the pair's high style with a complicated story, while (as always) beautiful to see and hear, is not entirely successful.

On the gorgeous Italian coast, a criminal trio headed by Rhino has staged a dramatic robbery of an armed vehicle, killing four people in the process. They intend to hide out for a few in the home of a co-conspirator lawyer, his writer friend Bernier, and muse Luce. But their perfect getaway plan is spoiled by the arrival of the writer's wife, her son, and her maid. As the cops descend on the group, a long and dramatic shoot-out occurs that will likely leave no one alive.

Cattet and Forzani's signature style is one beautiful display: a strange goddess, covered in gold, entices and rejects the men that want her and her offerings; the artist, the writer, and the lawyer engage in their professional and sexual pursuits; fast cars and naked skin abound, shown in close-ups of faces, arms, guns and blood. With a chilling yet seductive sound mix, coupled with a ruinous location and production design set to heighten the isolation, alienation, and surrealism of situation, Cattet and Forzani's worlds are always a disturbing joy to inhabit.

But something gets lost in the translation of the novel to the screen. What works in the directing duo's style to great ambiance and mood, does not work well when trying to convey a story and narrative, enough to keep the audience engaged and understanding the situation. Breaking down the story minute-by-minute is at first exciting, but soon becomes confusing and slightly tedious as it's hard to keep track of what is happening (somewhat necessary in narrative films).

Sure to say, this neo-giallo-western concotion can be enjoyed to a certain extent on the basis of style alone - the characters, while never explored in depth, are still rooted in their landscape, and the women (especially Luce and the maid, both of whom are far more clever than the men who surround them determined to outwit and outgun each other). But it often results in far less engagement with the story than in the directing pair's past films, where the greater surrealism of the narrative allows the style to have more space for meaning.

Within this stricter narrative, their distinct voice becomes a deterint to enjoyment. But certainly, Cattet and Forzani's unique signature style blends contemporary technique with wonderous homage, but its perhaps better suited to stories that are more abstract and require less concentration of attention, where emotions can run as wild and high as the sights and sounds.

Review originally published during Fantastic Fest in September 2017. The film will open in New York and Los Angeles theaters on Friday, August 31 and then roll out nationally on Friday, September 7, via Kino Lorber.

Do you feel this content is inappropriate or infringes upon your rights? Click here to report it, or see our DMCA policy.
BelgiumBernie BonvoisinBruno ForzaniElina LöwensohnFranceHélène CattetStéphane Ferrara

More about Let the Corpses Tan