REVIEW: Breaking & Exiting is guilty of petty larceny in a charmless romancer that steals away your time 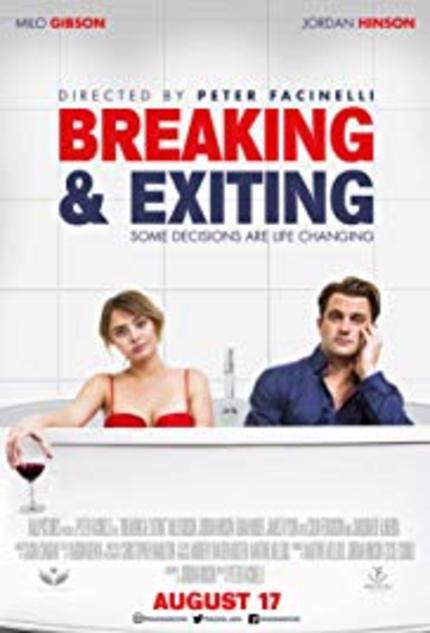 One may not be quite sure who is actually getting robbed in the cheeky romantic comedy Breaking & Exiting--the random owners of the unprotected homes in the movie or the audience watching this limping love story about a roguish house thief (Milo Gibson--son of Mel Gibson) that burglarizes a particular domicile while unexpectedly finding love in all the wrong places. The sorely predictable bad boy-meets-troubled tart premise is meant to be impishly clever but never quite registers beyond its woefully generic gimmick. The only thing remotely catchy about this hapless romancer is the film's playful title...and even then the cutesy play-on-words feels like a creative stretch. Quite frankly, this rudimentary slice of lovey-dovey home invasion hokum is definitely cringy for those that prefer their darkly light-hearted rom-com ribaldry be...shall we say...digestible? There have been countless romantic comedies--past, present and the future--that are annoying and forgettable and certainly, the vapid Breaking & Exiting will join the ranks alongside these dismissive duds.

Director Peter Facinelli, in his directorial debut, unconvincingly serves up a lame laugher that does not contain any kind of definitive luster to carry this fluff piece. Facinelli (a veteran movie and TV actor that has been around his share of Hollywood sets) merely oversees this slim and clumsily conceived romp with all the patchy techniques of filtered breeziness and cheesiness. Screenwriter Jordan Hinson (also starring as the film's leading lady accompanying Gibson on the big screen) conjures up cartoonish angst for the troubled tandem supposedly striking up camaraderie in the name of representing lost souls walking an uncertain path.

The problem remains that Breaking & Exiting does not bring anything substantial to the table in terms of hearty chuckles, solid poignancy or even a dosage of hormonal affection. Unfortunately, the stolen goods in Breaking & Exiting that should have been lifted from Gibson's on-screen butterfingers was a decent blueprint for an engaging scripted romance involving mismatched misfits on the ropes.

Los Angeles-based Harry (Gibson) earns his living as a seasoned crook breaking into houses. Harry's partner-in-crime is his cousin Chris (Adam Huber). However, Chris is sick and tired of the house-breaking racket and chooses to retire. But not the smooth-operating yet uncouth Harry as he is not about to turn his back on an illegal lucrative gig he has going for him quite successfully. Harry's next home theft will be an eye-opener when he discovers a half-dazed Daisy (Hinson) slumped down in her bathtub. The suicidal Daisy is an unusual find for the self-absorbed petty thief. No sooner does Harry decide to high-tail it out the door before his guilt weighs down his judgment to return to the damaged Daisy seemingly wanting to die (the fed-up Daisy experienced the obligatory boyfriend break-up syndrome earlier in the day). Go figure.

Thus, the newly considerate cad Harry schemes to keep Daisy's tainted mind off contemplating her desired demise. Feeling understandably sluggish and defeated, Daisy agrees to the cockeyed compromise that Harry can treat her to the last meal that he can prepare for her before the final farewell. Soon, the good-looking cocky criminal and the pretty suicidal sass start to relate intimately in discussion and flirtation. Suddenly, the need for Harry to cop a big score on his next home invasion is not that pressing. As for Daisy, her ex-lover left her without hope so why not see if handsome Harry can steal her heart instead of her household items? Alas, the detached duo realizes that perhaps their crappy lives can be shared in togetherness regardless of the unkind obstacles that remain at large. Isn't life grand after all?

Simplistic and nauseating, Breaking & Exiting is well-intentioned in its awkward efforts to create an off-kilter romancer about a couple of wayward societal outsiders finding redemption within the landscape of developmental love and lunacy. Sadly, Facinelli's hammy direction and Hinson's lethargic script cannot muster up anything viable in sardonic wit, genuine sentiment or cynical insight. The dialogue is dense. Both Gibson and Hinson could have been effectively serviceable in their on-screen chemistry if the shoddy material was not so tepidly undercooked. As the doomed lovebirds, Gibson's Harry and Hinson's Daisy were infuriating to the point that one would not care whether they were holed up in a prison cell or stretched out in a coffin. Plus, the turgid montage sequences saturated in mindless, sappy songs feel needlessly sophomoric in concept. What could have been a fresh, titillating, and toxic love story based on the subject matter of larceny and lost life turned into another unimaginative kissy-poo tickler bogged down in marshmallow depth.

Breaking & Exiting should be more than a movie-going misdemeanor in this felonious flop devoted to a pair of lop-sided lonely hearts in transition.

Do you feel this content is inappropriate or infringes upon your rights? Click here to report it, or see our DMCA policy.
Breaking & Exitinghouse thiefMilo GibsonPeter Facinelliromance