Director Yoalnde Zauberman investigates a shocking, albeit rampant issue in a cloistered community of Orthodox Jews in her latest documentary. 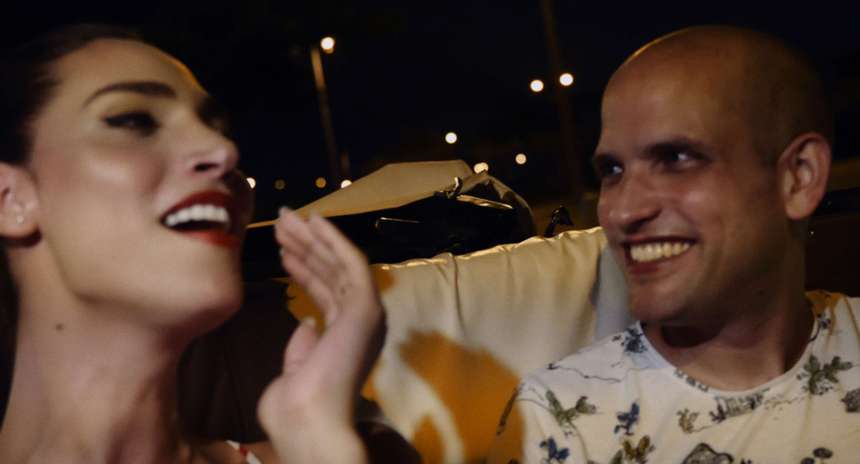 Would You Have Sex with an Arab? director Yolande Zauberman returns to Tel Aviv for her latest documentary investigation, laconically titled M. Zauberman embarks on a particularly dark journey to uncover a widespread, albeit absolutely unreported in the public, issue in the reticent community of ultra-Orthodox Jews.

The documentary opens on a nocturnal coast of Tel Aviv where Menahem Lang, the film´s protagonist and guide, demonstrates why he has become a renowned performer of liturgical chants in a religious community.

The next scene sees Menahem discussing his preference for transsexuals with Miss Trans Israel, despite claiming to be of heterosexual orientation. Somewhat cryptic exposition leads to a harrowing discovery that eventually bloats into monstrous proportions throughout the documentary.

Lang left the religion, employed his golden voice as an actor, and gained notoriety, as well as infamy in certain religious circles, for exposing his childhood abuser and getting his confession on camera. He was not the only rapist; Lang was not even eight years old at that time. And he was not the only victim, not by a longshot.

In a rare glance behind the curtain of an enclosed religious community shunning any media attention, M unveils shocking behavioral patterns that became normalized over the course of decades. Several generations testify to the deeply-rooted sexual abuse in numerous distressing personal accounts, pointing towards intrinsic pathology.

Zauberman fuses journalistic investigation and intriguing storytelling, resulting in a gripping exposé on rampant sexual abuse, doubling as a tumultuous yet touching personal story of Menahem Lang; how childhood abuse changed his life and his stance toward religion and how he finds more uncomfortable answers painting a larger and more alarming portrait of the issue.

Lang´s candidness and bravery to speak out and lay bare his experiences, his struggles with his own demons and a lack of understanding among family members turns Zauberman´s effort into an absorbing crusade. His charisma and credibility draws other victims with similar stories into his orbit, uncovering identical patterns.

The power of M resides in its accessibility despite the heavy subject. And the perfectly-chosen protagonist willing to be painfully frank about what happened to him and how it turned around his private life, hence his initial expression of attraction to transsexuals, has a pragmatic and heartbreaking explanation.

On top of it, Lang brims with natural charm. He is open and willing to probe the darker recesses of his soul by recalling the traumatizing experiences. Similarly, he does not avoid less favorable and least expected circumstances as why he did not defend himself more furiously against the unwanted physical advances. It's another heartbreaking explanation.

Lang´s testimony and the circumstances he describes bear greater social relevance, although not exclusive to the community of Orthodox Jews. The catalysts have nothing to do with religion and Zauberman´s endeavor yields eye-opening discoveries.

The director delivers a high-quality journalism piece through meticulously honed storytelling. Notwithstanding the gravity and severity of the topic, she manages to incorporate even entertaining moments courtesy of Lang in carefully-timed, light flourishes of humor.

A young Jew is about to be married; he does not know the bride since it is an arranged marriage yet wonders whether he even likes women because never was with one. His only sexual experience is being abused by men.

His genuine befuddlement over woman-to-woman sex -- a comic relief though much of them provides the protagonist, apparently a part of his coping mechanism -- and female conception of pleasure demonstrates a drastic lack of knowledge about sexuality. Not only the misunderstanding creates a giant rift in his private life, but being raped by family members at such a young age twisted his perception of intimacy and reshaped his personal identity.

Lang patiently listens and explains, he becomes the confessor, the teacher and eventually the bearer of the light, even though he himself acknowledges the damage that cannot be undone, yet he remains dedicated to preventing the abuse and calling other victims out to not suffer in silence.

Do you feel this content is inappropriate or infringes upon your rights? Click here to report it, or see our DMCA policy.
DocumentaryLocarno 2018MMenachem LangYolande Zauberman