Fantasia 2018 Review: The Dead Don't Rest In THE NIGHTSHIFTER 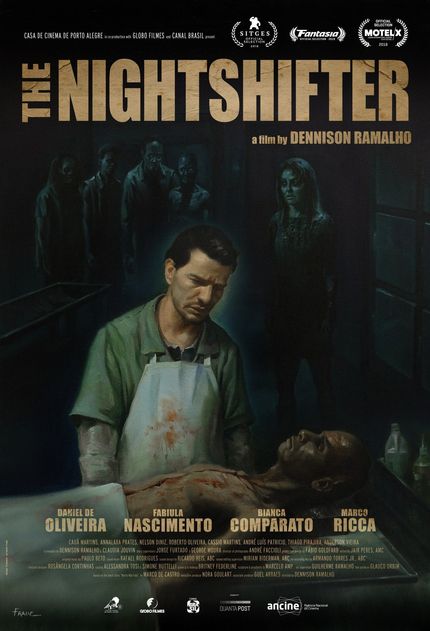 Stênio (Daniel de Oliveira), a Brazilian morgue worker, spends his nights talking to the corpses he has laid out on the slab. I guess I can imagine the kind of loneliness that might come along with a job like that, I might take to having conversations with the dead, myself. The crazy thing about Stênio, though, is that the bodies talk back, but only to him. Most of the chatter is gang bangers wanting to get revenge on the thugs that took them out, or some folks not believing they're actually kaput, but once in a while they'll say something interesting, and that's what gets Stênio in trouble.

As Stênio rolls into his apartment after a long night at work to finally see his kids, he's immediately chastised by his shrew of a wife, Odete (Fabiula Nascimento), for daring to sit down on his couch with his daughter before getting out of his stinky work clothes. After a while, I suppose the stench of death would get to anybody, but Odete's nagging doesn't end there. Stênio isn't home enough, he doesn't make enough money, he doesn't pay enough attention to her, and on and on. But he soldiers on, knowing that he's working his butt off to make sure that everybody lives in relative comfort, too bad that's not enough for Odete.

When he discovers that his wife is not being faithful, Stênio stumbles onto a way to use his unusual gift of gab with dead thugs to take out his romantic rival. Unfortunately for him, dealing with shady people often leads to disaster, and before long he finds himself caught in a nightmare of his own creation when his attempted hit goes sideways and unleashes a vengeful spirit that'll stop at nothing to take him down.

Director Dennison Ramalho is no stranger to horror films, he's made a number of short films that have played in festivals around the world including as part of the ABCs of Death series and he wrote the most recent film from Brazilian legend Coffin Joe, Embodiment of Evil. The NightShifter (Morto Não Fala) marks his debut as a feature director, though, and it is an impressive first step toward what is hopefully a long and fruitful career. Ramalho not only brings new ideas exploited in novel ways to the screen, but also a calm, steady hand that very much betrays his lack of feature experience.

Quality, confident performances from his leads do Ramalho's film a great service. Daniel de Oliveira, as a character who spends a significant chunk of his time talking to dead bodies, is required to carry a lot of the dialogue himself, along with the surprisingly effective emotional drama. Fabiula Nascimento is a bit less nuanced as the very one-note shrew-y Odete, but even she finds moments to shine in this well drawn portrait of a family that can no longer make it work. Also putting in solid work is Bianca Comparato as Lara, an acquaintance of Stênio who finds herself dug deep into his mess through no fault of her own.

Ramalho uses the well-worn back alleys and streets of São Paolo very effectively. The lived in look of the city and Stênio's home reflect his own experience of life, dull, drab, just scraping by. The city and its many dangers don't frighten him at first, his conversations with the dead are enough to steel him against most terrors, but when those fears begin chasing him, the city becomes even darker than before.

Everything about The NightShifter is impressive, from the novel twist on an old idea, to the delightfully gooey autopsy gore, to the execution of the more emotional resonant elements of the story. Ramalho has made a very self-assured, but not flashy, debut with this film, and it makes it very evident that he is definitely a filmmaker to look out for.

More about The Nightshifter