Review: SKYSCRAPER, You're Not Going to Believe This 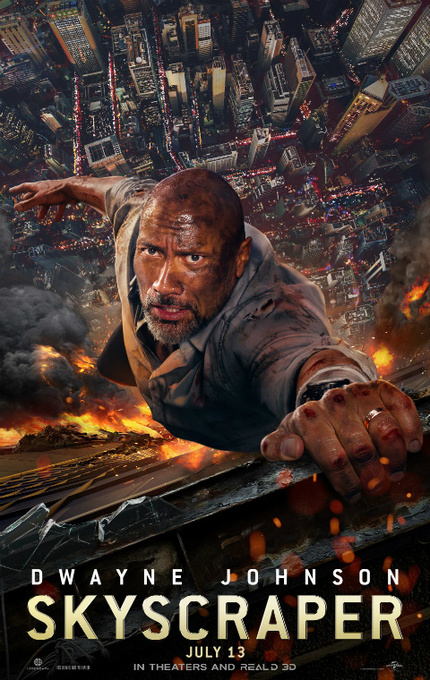 "Made it, Ma! Top of the world!" Oh, if only Skyscraper displayed 1/10 of the furious intensity that consumed James Cagney in White Heat!

But that's a ridiculous thought, almost as ridiculous as Skyscraper itself, which director Rawson Marshall Thurber cobbed together carefully as a writer. Freely acknowledging the bald influences of Die Hard and The Towering Inferno, the first act of the script lays out every plot and character point with precision, foreshadowing a third act that is crammed with crowd-pleasing payoffs that raise the stakes ever higher, even higher than the building itself.

A very cheerful action thriller, Skyscraper is a good nail-biter. The extremity of the action sequences teeter frequently into incredulity, quickly becoming risible, but it prompts the kind of respectful laughter that is accorded to those who know they are spinning an audacious, unbelievable tale and have the courage of their convictions, never slackening the hand or backing off or admitting the unreality of the basic premise.

Set in and around an imaginary high-rise building -- twice as tall as anything in existence today, so we're already in Fantasy Land -- that is supposedly located in Hong Kong (though production primarily took place in Vancouver, Canada), the film's hero is Will Sawyer, a military veteran. Ten years before, he lost the lower part of one leg while in the FBI, prompting him to hang up his weapons and eventually become a private security consultant.

Dwayne Johnson has been toying around with his persona as a brave leading man of action cinema. As Will Sawyer, he's hesitant to exert his muscle-man prowess and, despite his past experience in the military and the FBI, and the passage of ten years, he's still gun-shy, so to speak, about his own abilities as a security consultant, and very much needs the support of his loyal, dedicated wife Sarah.

The two met on the fateful night when Will lost part of his leg; she is a surgeon, also with military experience and a no-nonsense approach to life. Neve Campbell is fully up to the task of embodying Sarah as a determined woman who is not intimidated by a little emergency like a fire breaking out on the 89th floor of a skyscraper in which she and her family find themselves trapped. Naturally, they have two children, a girl (McKenna Roberts) and a boy (Noah Cottrell), who are twins and are equally brave and adorable.

Like The Towering Inferno, which itself was cobbled together from two source novels, Skyscraper takes place in the world's tallest building on a night when its fire extinguishing systems have not yet been fully tested, inviting disaster when a fire breaks out in an upper floor. Like Die Hard, a European villain (here, Roland Moller) seizes control of the building and does not hesitate to execute innocent villains in pursuit of his initially hidden mercenary goal, only to be foiled by someone he did not expect.

The predictability of its plot makes Skyscraper feel like a movie that's been made before. The primary difference, beyond director Thurber's exuberance in making every plot twist easily anticipated, is that it's been tailor-made for Dwayne Johnson to inhabit. Despite all his well-articulated muscles, we are frequently reminded that Will Sawyer is a man with an artificial limb, which is apt to separate from him at inopportune moments as he's running around, falsely accused of criminal complicity, gaining access to the skyscraper, climbing tall buildings, rescuing his children, and, in general, being a very, very brave, self-sacrificing man.

Ultimately, the film's willful reticence to admit it's all a big joke is what won me over in the early scenes, while its continual suspension of belief is what keep me watching with pleasure. That may be hard for some to believe, but it's the truth.

Skyscraper will open in theaters in Canada and the U.S. on Friday, July 13, and in China on July 20.

Do you feel this content is inappropriate or infringes upon your rights? Click here to report it, or see our DMCA policy.
Dwayne JohnsonNeve CampbellRawson Marshall Thurber