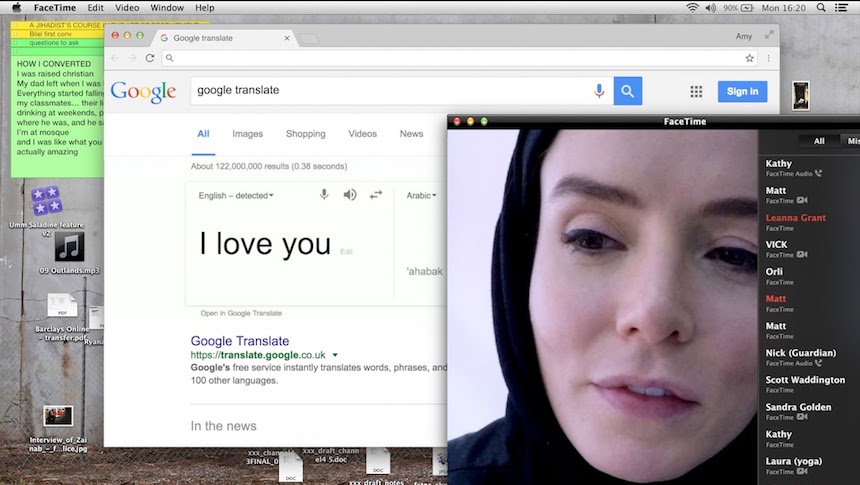 "You would never lie to me," asks Abu Bilel Al-Britani, a hunkish and charming Jihadi recruiter for ISIS, as he skypes from with Amy Whittaker in her South London flat. But we are well into the age of online 'Catfishing,' and Amy is not one of the many lost and lonely young European women whom ISIS lured to become war-brides in Raqqa and the swelling Islamic State Caliphate. She is actually a freelance journalist (think Vice Media, and its immersive style of reporting) who has pitched a story to one of her regular editors about uncovering the process of how savvy ISIS operators convince alienated westerners to drop their lives and fly to war torn Syria and re-invent their live 'with purpose' in the recent 7 year horror show of violence and terror.

Trust is as much of the foundation of journalism (these days it is eroding alarmingly online), as it is in an online relationships (ditto). The violation of such trusts are mined in an immediate and immersive fashion in the latest 'desktop horror' picture, Profile, from Timur Bekmambetov.

The Kazakhstan director cut his teeth on glossy, but R-rated, Russian fantasy blockbusters Night Watch and Day Watch before moving into Hollywood to continually increase the budget and excess of popcorn cinema with Wanted and Abraham Lincoln: Vampire Hunter. On the side, he has started a cottage industry of Desktop Cinema, what he calls, 'Screen Life.' Unfriended, its recent sequel Dark Web and the upcoming John Cho thriller, Searching, are movies entirely mediated through computer screens, with all of the 'shots' being web-browsers, instant messages, Skype and Facetime windows.

There are many 'movie' twists and turns over the course of the film adaptation, and I am not sure how faithful it is to the source material, but there is no denying that adding the layer of 'based on a True Story' amplifies the ick factor of the film.

It is not long before she is contacted by Bilel, whom immediately starts flirting with cat gifs (the universal language of the internet) and showing off the weapons and privileges of his rank, combined with stories of his previous empty life in London before making his way to the Middle East and glory. It is all hokey and earnest, but exactly the sort of ways we clumsily try to make an impression with our 'most impressive self' online.

With the tech support of the newsroom's IT staff and a screen recording app, Amy has been capturing her entire screen as Bilel and her start of an online relationship. Her Skyping from her kitchen, and him from various locations, dusty urban roads, a makeshift soccer pitch playing football with a diverse group of immigrants who have joined the Caliphate (Soccer being the universal language of sports) using his mobile phone, or an office with a desktop computer and a bunch of cubicles of other ISIS operators set up like a telemarketing operation.

Amy takes some (but not much) care to 'divide' the online social network her real life, - a Liberal, urbane Millennial existence with her partying friends, Border Collie, and milquetoast fiancé - and her submissive, devout Melody character. Much of the tension in the first half of the movie is her real life intruding on her online courtship with Bilel. She is multitasking (as one does) paying bills, online shopping, and doing online research while waiting for Bilel to call, but she is also in the midst of moving into a shared apartment, and he is constantly intruding on her undercover work to discuss floor to ceiling windows and rent budgets.

Amy's increasing emotional investment, they cook curry together over Skype (as one does), and divulge intimate details about their past and their families. Anyone who has been caught up in long-distance, online relationships, will recognize certain signs. And horror films excel in taking cogent, relatable, fears (betrayal of trust, social embarrassment, being caught cheating, or cheated upon) and exaggerate them for maximum effect.

Seeing ISIS flags, and their vile Youtube propaganda, many of which are essentially snuff films, used in an entertainment context (scenes with Shazad Latif, who plays Bilel, were shot in Cyprus), combined with the Based on A True Story angle, the film can be earnest and manipulative and icky all at the same time. So can a toxic relationship, by the way. Your morality may vary.

Watching what is essentially a Macbook screen on a giant cinema screen with an audience, the experience here is surprisingly seamless. We're living in these places a lot these days, so the storytelling grammar is quite natural. The film is not fully absent of traditional filmmaking, as sharp eyed viewers (OK, editing nerds) may note that, for most part, we not actually watching Amy do the things she is doing, but rather her reviewing all of her recorded files for the past 20 something days, while on the cusp of a 'big decision.'  There is the cue of using a song, here a remix of Daft Punk's Get Lucky, twice to book-end the 'relatively safe' part of the film, and to signal a move into an the 'no safety net' final act where Amy is, as the uncover cops say, "in too deep."

By using an image of Disney's Snow White (in an Hijab of course) as Melody's avatar, Bekmambetov indicates that Profile is as much an attempt to make new mythologies and morality tales, as the Greeks or the Brothers Grimm did in their day, Ones that exist our new virtual spaces while they are still in their infancy, and the fear of unknown consequence is akin to medieval peasants venturing into the deep, dark woods at night.