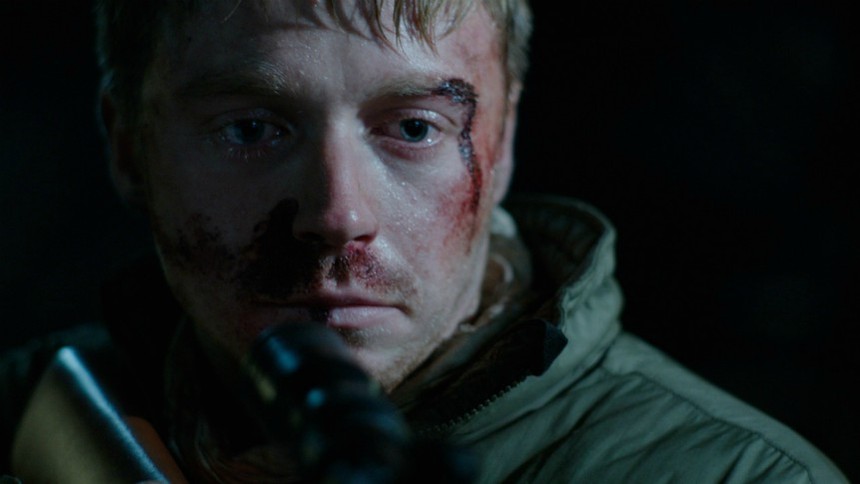 Atmospheric Scottish Highland-set thriller Calibre has taken the top prize at this year's Edinburgh International Film Festival and there's good news for anyone who wants to watch the award-winning film: just a few days after it's World Premiere at the festival, it became available to view on UK Netflix.

The film is the feature debut of Matt Palmer and stars Jack Lowden and Martin McCann as a pair of friends who make a terrible mistake on a hunting trip, falling foul of gun-wielding villagers who draw them into a dark nightmare...

Others winners at the festival include Best Performance Awards for actresses Liv Hill and Sinead Matthews for their roles in British drama Jellyfish, Best International Feature Film for Cyril Shäublin’s Those Who Were Fine, and a Best Documentary Feature Film Award for Kevin MacDonald's insightful look into the life of Whitney.

The winner of the prestigious Michael Powell Award for Best British Feature Film, which honours imagination and creativity in British filmmaking, went to British filmmaker Matt Palmer’s debut feature, CALIBRE, which received its World Premiere at the Festival.

The winner was chosen by the Michael Powell Jury comprised of Ana Ularu, Jason Connery and Iain de Caestecker.

“Being part of the Edinburgh International Film Festival through the lens of serving on the Michael Powell Award jury has been an extraordinary experience. Art should not leave its reviewers unimpressed or passive, and we hope these awards named after a titan of the industry will have a far-reaching effect. A particular theme that featured in the films in competition this year was of children carrying the burden of adulthood. It has been fantastic to see a range of diverse films acknowledging the wealth of talent and craft in British filmmaking.

We present the Michael Powell Award to CALIBRE, which unanimously made the biggest impact on us. Beautifully shot, technically accomplished, with a fantastic ensemble performance, director and screenwriter Matt Palmer pitches the tension and emotional journey flawlessly. We are fully invested in the characters and their dilemmas as the choices they make lead to a shattering conclusion.”

Director Matt Palmer said: “We're so honoured for CALIBRE to win this prestigious award, particularly considering the incredible list of previous winners. We've been completely thrilled by the amazing response from Edinburgh International Film Festival audiences and had a fantastic experience at the Festival, which has been the perfect lead up to CALIBRE’S global release on Netflix today.”

THE AWARD FOR BEST PERFORMANCE IN A BRITISH FEATURE FILM

The award for Best Performance in a British Feature Film went jointly to actresses Liv Hill and Sinead Matthews for their roles in JELLYFISH and was also selected by the Michael Powell jurors.

The jury said: “In the category of Best Performance in a British Feature Film, the Michael Powell jury recognises an actress who carries their character in every bone of their body and on whose shoulders rests the ultimate success of the film. Liv Hill’s performance in JELLYFISH encompasses a wide range of superbly delivered emotion, from acute comedy to the depths of despair. As her story unfolds, we see a 15-year old girl dealing with so much that we are completely invested, and the intensity, intelligence and nuance of her portrayal made us shed a tear.

The award also goes to Sinead Matthews who creates a visceral character of abysmal highs and lows with assured powerful and elegant touches. In less capable hands, the character could have been detrimental to the movie but her thoughtful and complex portrayal of a woman in the grip of mental health issues was extraordinary.”

Liv Hill said: “"I am absolutely thrilled to receive this award and even more delighted to be sharing it with the extraordinary Sinead Matthews. JELLYFISH was a very special experience for me and I still feel so lucky to have worked with James Gardner on his first feature - and mine! Thank you to the jury and Edinburgh International Film Festival for supporting the film."

Sinead Matthews said: “I am so completely thrilled and honoured to be given a prestigious award like this and to share it with Liv Hill makes it all the more special.”

The award for Best International Feature Film went to Cyril Shäublin’s THOSE WHO ARE FINE, which received its UK Premiere at this year’s Festival. The winner was chosen by the International Jury comprised of Gráinne Humphreys, Simin Motamed-Arya and Yung Kha.

“The international jury were united in their decision to award best film to THOSE WHO ARE FINE. We agreed that the film was a playful and engaging commentary on contemporary society; elements and ideas were unified with a minimalist elegance by the director and cinematographer. A fresh and vital new talent.”

Cyril Shäublin said: “Edinburgh welcomed us and our film warmly, both the people and the sun were beaming. It was great how people from the audience started talking to us about our film, after the screenings outside the cinema, questioning the movie and sharing with us their own ways of looking at things. That’s the best we can ask for. To get this award on top of that all is just wonderful. Thank you so much EIFF for all the support, from the heart!”

The International Jury also gave a Special Mention to Likarion Wainaina’s SUPA MODO for its “excellent portrait of community and family.”

“An assured film which delivers on every count, from narrative momentum to superb journalism and flawless editing, exposing a story which has timely and timeless resonance.”

Director Kevin Macdonald said: “It’s great to win Best Documentary at Edinburgh particularly as I started my life in documentaries at the Festival 20 years ago working as a documentary programmer. It means a lot to me.”

THE AWARD FOR BEST SHORT FILM

The award for Best Short Feature Film went to Emily Ann Hoffman’s NEVADA. Special Mentions were also given to SOULS OF TOTALITY and COSMIC KALEIDOSCOPE.

“This stop-motion animation was commended for its originality and in particular for its depiction of intimacy. It tackled an interesting and important subject in a unique and charming way.”

Emily Ann Hoffman said: “Thank you so much to the film festival and the jury for this honour. I truly wish I could be there to celebrate with you all in person. NEVADA is about intimacy and vulnerability, but more importantly, it is about a woman exercising her right to govern her own body. I’m so happy to have this message be received and celebrated internationally. Cheers to all the other filmmakers and thank you again!”

THE EIFF WORKS IN PROGRESS WINNER

The winner of this year’s EIFF Works in Progress and recipient of the £2,500 prize is RIDING THE WAVE by Martyn Robertson.

Martyn Robertson said “Pitching amongst so many other strong fiction and non-fiction projects was daunting but a very worthwhile experience. The chance to meet sales agents and distributors along with potential financiers was great too. This award means I can continue following Ben & Marti’s story in the immediate future. This award solves the problem of continuing filming a time sensitive documentary while we piece together completion financing. It’s also welcome recognition for a project that I’ve been working on for nearly two years now and gives me added confidence in my story and quest to complete this film. Thanks to everyone in the Industry & Talent Development team at EIFF for the opportunity to participate and for selecting my project to receive this year’s award!”