Review: CHINA SALESMAN Rings Up No Sales For Action Fans

Mike Tyson and Steven Seagal are featured, though it's not exactly clear why. 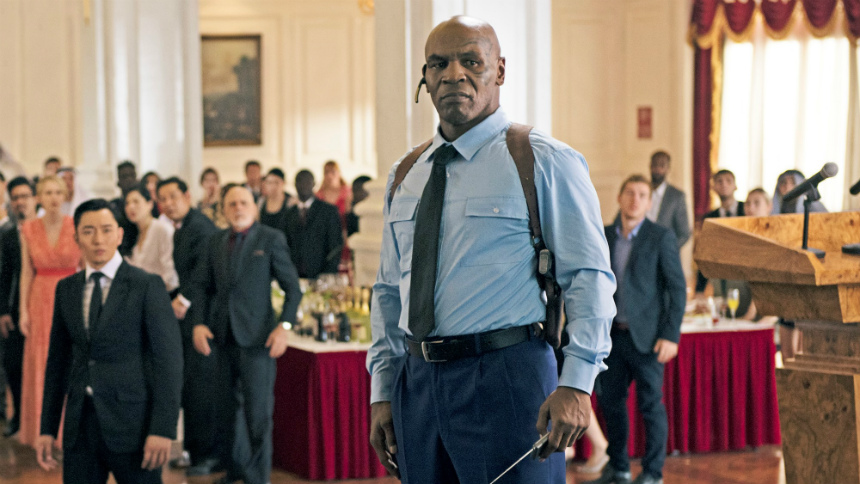 Sometimes my learned optimism gets the better of me. By which I mean that China Salesman is a complete disaster.

Early peeks at trailers and clips gave me the mistaken idea that the film might be able to pull off an awkward mixture of aging action stars and lesser-known dramatic actors with flair and a sense of fun ... or at least create a storyline that was easily understood as a set-up for the action sequences. After all, longtime action fans, such as myself, understand that a lack of narrative cohesion is sometimes the price that must be paid in the pursuit of truly awesome, spine-tingling and elaborate scenes of battle and mayhem.

While I have no doubt that all members of the cast and crew worked very hard under presumably challenging conditions, China Salesman is still ... a complete disaster.

As I watched the film, my mind scurried to figure out what was being said, and to what purpose. At some point, someone signed off on the script, which, for all I know, makes perfect sense on the printed page.

On the screen, however, delivered in a variety of languages in a variety of stilted accents by a variety of actors who sound like they just read their lines for the first time and in a language in which they are not fluent ... it's well-nigh incomprehensible, to the extent that I eventually gave up on trying to decipher exactly what some of the actors were saying.

None of that would matter as much or become so noticeable if the action sequences really stood out. Sadly, Tan Bing (aka Bing Tan), who wrote the script with Scott Salter and directed (evidently by himself), displays only a rudimentary grasp of visual aesthetics. It's entirely possible, of course, that he is an expert in filming time, space, and flying bodies, but chose a different approach here because ... er ... artistic freedom? 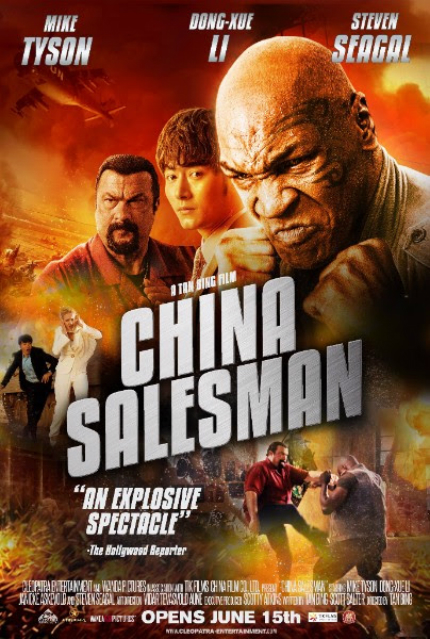 For the record, Li Dong-xue (1911, Brotherhood of Blades) stars as Yan Jian, an IT engineer who travels to North Africa because he would like to get out of his office in China and stretch his legs, professionally speaking. He works for a telecommunications company that is bidding on a new contract for the unidentified nation, which has just emerged from a devastating civil war and is eager to join the modern world.

Upon arrival, Yan Jian meets with his colleague Ruan Ling, who has been plowing away as a sales executive without success for some time. Due to his engineering brilliance and a bit of deceitful trickery, though, Yan Jian enables their company to show up other competitors and land in a two-company competition to win the multi-million dollar bid.

Not everyone is happy with Yan Jian's success, however, especially his sneering rivals at the competing company, who will go to any length to win the contract. And from the beginning, we see that tribal leader Kabbah (Mike Tyson) doesn't want anyone to win the contract, because ... er ... {mumble mumble mumble}.

Yeah, Li Cong-xue's spoken English is poor, but I realize it's not his first language. But Mike Tyson -- please don't hit me, Mr. Tyson, but I didn't understand a thing you said in this movie. I suppose his fists are intended to do his talking for him, but nearly all the action scenes are actually military battles, and so there is little for him to do except growl and shout and hoist a bazooka on his shoulder.

As for Steven Seagal, who appears early and then not so often as a mercenary of some sort, I know he can speak English intelligibly because I've heard him speak English in all his other movies. Now in his 60s -- but only two years older than Jackie Chan -- the poor man evidently has trouble moving around. I can certainly sympathize -- not everybody can be Jackie Chan! -- but that means his fight scenes consist of him grunting and holding up his fists and grunting and then holding up his arms and moving them in irregular patterns. Perhaps that's intended to represent his new style of action choreography?

Yikes! To make matters more unintelligible, the plot itself jumps around, introducing new rivals and new enemies and new factions, and I haven't even mentioned Janicke Askevold, who is evidently a blue belt in Shotokan Karate (according to IMDb), but never gets to show that off. Instead, she alternates screaming and sneering at people, and then eventually begins to fall a little for Yan Jian.

Oh, did I mention that this movie claims it is based on a true story? How could I bury the lede like that? Or explain why the film is titled China Salesman? Maybe that can wait until the sequel.

The film will open in select U.S. theaters on Friday, June 15 and VOD platforms on Tuesday, June 26.

Do you feel this content is inappropriate or infringes upon your rights? Click here to report it, or see our DMCA policy.
Bing TanChinaJanicke AskevoldLi Dong-xueMike TysonSteven SeagalTan Bing