Now on Blu-ray: THE ENDLESS Is A New Classic From The Team Behind RESOLUTION 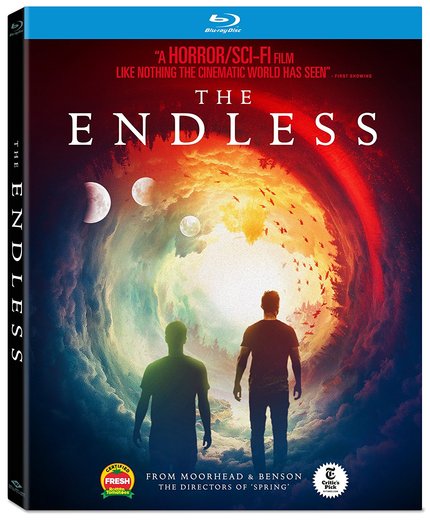 Out on Blu-ray this week is the third feature from the directing team of Justin Benson and Aaron Moorhead, The Endless. This latest feature is their most adventurous to date and blends their unique sense of humor and a solid grasp of science fiction into one of a new classic of independent horror that is bound to delight fans of their previous work, Resolution.

I won't say too much about the film as a lot of the joy is in the discovery, however, basically it's the story of two brothers (Benson and Moorhead, themselves) who are lured back to a UFO cult in the desert that they'd left a decade before. Once they get there, they discover that maybe the cult wasn't that crazy after all when their world and the worlds of those around them start acting funny.

Shelagh Rowan-Legg reviewed the film in conjunction with its world premiere at Tribeca last year and had this to say:

I definitely agree with her assessment. The Endless is one of the best written horror films of recent years, taking the time and space to deal not only with the challenges the brothers face at the hands of a universe collapsing on them, but also on their relationship with one another. It's truly remarkable and evidence that these two directors are definitely on the road to greatness.

The Endless looks and sounds great. It's a brand new film, shot on digital, there's no reason it shouldn't. I do want to point out the exceptional DTS-HD MA 5.1 surround track and the incredible work in the area of sound design. For a film that was made on a relatively small budget, the FX, both visual and audio, are stellar and the mix for the film is very immersive and definitely helps sell the illusion.

Usually I'm not terribly excited about digging into bonus materials for contemporary films. All too often we get fluffy EPK stuff and possibly a cursory audio commentary, but Benson and Moorhead went all out on this disc with Well Go USA to pack it with quality materials. There is the audio commentary, which is fantastic, and if you've never seen or heard the directors speak, I highly recommend checking it out or googling some Q&As as they are some of the most entertaining movie pros out there right now. The commentary definitely reflects their brotherly rapport along with providing plenty of meat for the astute listener.

On top of that there is a great half-hour making of, also shot by the directors, in which they tackle every part of the production from writing, to shooting, to editing & sound mix. Again, this could be a very dry piece, but their charisma is undeniable and they definitely make it worth your while. There is additional behind the scenes footage, some deleted scenes and plenty of outtakes, a reel of VFX breakdowns, a bunch of neat short pieces that involve the world in which The Endless takes place (including one starring our fearless leader, Todd Brown), and on and on.

If you love the film, or hell, even if you're just curious, The Endless on Blu-ray will not let you down. It's a treasure trove of bonus material that makes it one of the most complete home video releases for a modern film in recent memory. Highly recommended.