Trieste 2017 Dispatch: Science Fiction Both Familiar and Fresh Strikes a Chord With Festivalgoers

As is to be expected from a festival that calls itself Science + Fiction, sci-fi offerings or scientific documentaries make up the bulk of the feature film program. While in Trieste, ScreenAnarchy filled out the weekend by traveling back and forth between the Miela and Politeama Rossetti theatres to catch the Italian premieres of Science Fiction Volume 1: The Osiris Child, Before We Vanish and The Endless.

Continue reading for our festival report. 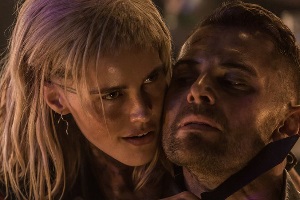 With zero control over their man-made monstrosities, a prison break that sees the beasts rampaging towards the capital, a cover-up scheme that would have Exor decimating all life on the planet and Sommerville’s daughter caught in the crosshairs of it all, Abbess throws everything but the kitchen sink at viewers in a film that feels cluttered from the get-go.

Science Fiction Volume 1 eagerly implants the notion that the stakes are immeasurably high without ever eliciting much of an emotional response from the audience. The way in which the father-daughter relationship is superficially broached at the start of the film – manipulatively constructed to tug at the heartstrings during the climax – is just one instance in which Abbess’ film clumsily shows its seams.

Awkwardly divided in chapters, Science Fiction Volume 1 tries to ramp up suspense by intermixing action with backstory but generates little interest with Sommerville’s stereotypical travel companion, Sy Lombrok (Kellan Lutz), a prison escapee with a checkered past who now has the opportunity to redeem himself. The structure feels gimmicky and disrupts the flow with one instance of flashback exposition towards the end of the film being particularly grating for trying to choke us with false sentiment.

Much like Abbess’ previous film, Infini, an able display of craftsmanship short on original ideas, Science Fiction Volume 1 stitches together clichéd situations in a slick production designed for non-demanding audiences. 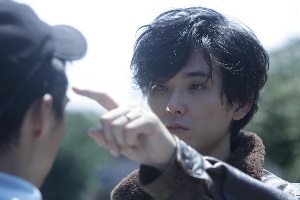 Where Abbess transports sci-fi junkies to a galaxy in which all is not well,  Kurosawa Kiyoshi puts the focus on the home planet with a cheeky tale of alien visitation that forgets the spectacle one has come to associate with otherworldly invasion.

Of course, Kurosawa’s science fiction opus was never going to be a straightforward affair (regardless of how deceptive a trailer was cut) but Before We Vanish is sure to rub some viewers the wrong way with a plodding sense of pace and a penchant for retreading the same ground.

Before We Vanish opens with great promise as a teenager’s return from school culminates in off-screen murder. A wonderful pan through the house reveals the aftermath of the massacre before a close-up lingers on her face and sees her sampling a drop of blood. Seconds later this young girl possessed by an alien uncaringly causes a traffic collision but after that any and all action grinds to a halt in favor of long-winded dialogue exchanges between a total of three visitors and the humans they enlist as their guides.

Much of the film is preoccupied with exposing the nature of mankind. Through a touch of their fingertips the aliens collect our conceptions (the mental images and meanings of things we value) in an effort to understand the species they will soon subjugate.

Little by little Kurosawa’s extraterrestrials discover we are mostly an egocentric bunch that puts a premium on material things and is keen on finding ways to express our superiority over others. Through unsubtle means Kurosawa keeps force-feeding the notion that we have lost sight of what’s important and may deserve extinction.

Before We Vanish is gorgeously framed, judicious with cuts, and – eventually – not short on frenetic tracking shots and camera rotations during a briefly energized climax but would have fared much better had it been condensed by at least 30 minutes. Additionally, Kurosawa’s existential drama about the erring ways of mankind conjures a simplistic vision of hope for the future out of the redemptive power of love, a cliché that hardly befits a master filmmaker. (For a more optimistic take on Kurosawa’s latest read Ard Vijn’s in-depth review). 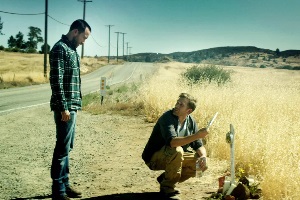 With both Abbess’ and Kurosawa’s films failing to break new ground, The Endless proved an exceptionally rewarding walk off the beaten path (even though, ironically, it circles back to themes and locations from the writer-directors duo's previous works).

Given that the story features time-loop pockets and oozes dread of a cosmological nature courtesy of a cruel, puppeteering elder god, it’s no stretch to call Benson and Moorhead’s latest a sci-fi offering, but it does a disservice to a film that amounts to so much more.

The Endless, inarguably the must-see genre film of 2017, kicks off with two former cult-members being drawn back to the camp Arcadia commune from which they escaped. Although ‘escaped’ is not necessarily the right word for Aaron who has only happy childhood memories of the place where he felt most at home. His well-intentioned but controlling sibling, Justin, pulled him out of the cult for fear of a mass suicide pact and has felt an enormous responsibility for his kid brother ever since.

Leave it to Benson and Moorhead to figure out a way to enrich the story of Resolution without making either a sequel or a prequel but rather by subsuming their debut film into the greater whole that just so happens to be a self-aware microcosm existing within Lovecraft’s mythos. Befitting the eldritch vibe of the film, The Endless pits the thirst for rationalizations and empirical proof against blind faith and the unfathomable; it contemplates the idea of infinite possibilities in finite time (life) and the value of choosing your own fate in the face of something preordained and seemingly inalterable.

Their latest film tells an atmospheric mystery of universal scope yet is also intimately concerned with brotherly love and finding one’s groove in a life and world that don’t always make sense. The Endless is a testament to creative risk-taking and unlike anything else you will see all year. (For a further unpacking of the film’s many themes, Shelagh Rowan-Legg’s review is a must). 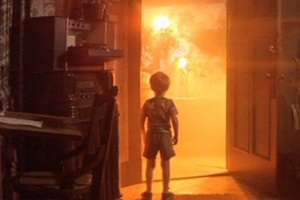 Coming down from the heady nature of Benson and Moorhead’s genre-juggling act the closing night film in the Rossetti theatre, a 40th anniversary celebration of Spielberg’s Close Encounters of the Third Kind, felt like comfort food for the soul. The initial alien visitation and Barry’s abduction scene are early standouts captured in colorful strokes that summon a sense of wonder only Spielberg can.

On the whole, Close Encounters of the Third Kind moves at a glacial pace with the drive and mountain climb to the alien rendezvous almost bringing the film to a halt, but there’s always one more moment of visual poetry right around the corner to rekindle our interest. The 4K visuals looked undeniably crisp, even if the sound mix seemed strangely off with some of the actors’ voices not really standing the test of time. Too thin or screechy, they were often at risk of being swallowed up by the booming orchestral backing of John Williams’ awe-inspiring soundtrack.

Do you feel this content is inappropriate or infringes upon your rights? Click here to report it, or see our DMCA policy.
Aaron MoorheadBefore We VanishClose Encounters of the Third KindInfiniJustin BensonKiyoshi KurosawaScience Fiction Volume 1: The Osiris ChildShane AbbessSteven SpielbergThe Endless