Justin Benson and Aaron Moorhead direct and star in an unnerving thriller.

Harkening back to the world of their first film (in a quite literal sense), Benson and Moorhead have crafted the kind of fantastical horror that creeps under your skin even as you are riveted to the screen, where stark, bright colours, and wonderful analog sounds of old video players mix with low growls of giant, unseen creatures; the former will break your heart, the latter will tear it to pieces.

10 years earlier, Justin (Benson) got himself and his younger brother Aaron (Moorhead) away from what Justin describes as a 'UFO Death Cult', just before the fellow members planned to kill themselves. Or so he tells Aaron, in order to justify their escape from what Aaron remembers as a good community, with nice people and plenty of food. Frustrated with their current existence of menial jobs, lack of nutritional food, and no girlfriends, Aaron receives a tape one day from the cult, and convinces Justin to go back with him for a short visit. While there, they are forced to examine their memories of the past, their own fraught relationship, and the monsters that lurk in the metaphorical and literal dark.

The cult at Camp Arcadia seems, at first, to be pretty benign and loving; but as Justin points out, that's how they get you. Sure, they might believe in some strange deity that hovers above them, but if that results in happy lives, the pursuit of interests such as making clothes, archery, and gardening, and everyone is healthy and happy, is that so bad? Not for Aaron, who at first finds peace even if he doesn't understand the underlying problems. Justin, with his self-imposed burden of looking after his younger brother, questions everything to the point of possibly lying in order to escape. He is not assured by such a seeming paradise, knowing that there is no such thing. 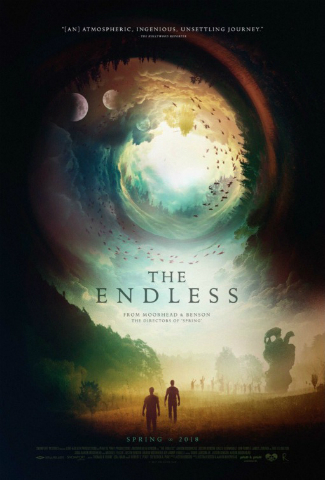 Benson's scripts have always done a great job of combining the mathematical/logical with the metaphysical; even the cult's defacto leader Hal (Tate Ellington) is searching for a 'reasonable' answer to the group's quandry. And any possible answers to the wider mystery come in the form of photographs and videos; these are semi-obsolete polaroids and analogue videotapes, providing a necessary physical presence for such evidence. Beyond the words that people say (which can mislead and manipulate), what evidence can be provided to assure or disuade, or simply know the facts or truth?

At this point, the film shifts from family reunion to metanarrative examination: how do we see ourselves versus how are we seen? How would some monster with a movie camera view our state of being? What do we think is the narrative of our life, and how would we exist if we had all the time in the world, or only a moment? These themes harken back to Resolution, made overt in the appearance of that first film's characters in The Endless; a reflection of the artists' struggle with a desire not to repeat themselves, or an idea of looking at the same themes/ideas from a different angle.

Casting themselves in the lead roles might seem a bit cheeky on the surface (and certainly it's not a good idea to read too much into their characters as a reflection of Benson and Moorhead themselves or the nature of the relationship, professional or personal), but this is more about exploring themselves and their relationship to their work (reminding me somewhat of Stephen King placing himself in the narrative of his Dark Tower series, his beast of a novel series that both excited and exacerbated him). The worlds Benson and Moorhead have created in their films is still an extension of themselves, so who better than them to examine where that universe comes from and what is the nature of its meaning is, than themselves. And they perform admirably, by not just playing themselves, and surrounding themselves with a great ensemble cast, inluding Ellington, Callie Hernandez, Kira Powell, and Shane Brady, as other cult members in various states of belonging and as cyphers for the duo's understanding of their situation.

The gorgeous cinematography brings to life the particular combination of the metaphysical and the real at which these filmmakers are particularly adept. The harsh, almost brutal sunlight slowly becomes warmer and yet more dangerous as the story progresses, and the washed-out colours of rural southern California become more beautiful, and more dangerous in that beauty. Combined with the haunting score by Jimmy Laville (who also worked on Spring), these are the fever dreams and nightmares we have all had, or strange moments in our lives we have experiences, where we feel the veil between the real and the meta thin to the point of easy tearing apart.

Review originally published during the Tribeca Film Festival in April 2017. The film opens in theaters in various U.S. cities this month, starting today; visit the official site for more information.

Do you feel this content is inappropriate or infringes upon your rights? Click here to report it, or see our DMCA policy.
Aaron MoorheadCallie HernandezEmily MontagueJustin Benson