Review: With JEANNETTE: THE CHILDHOOD OF JOAN OF ARC, Bruno Dumont Charts Yet Another Territory 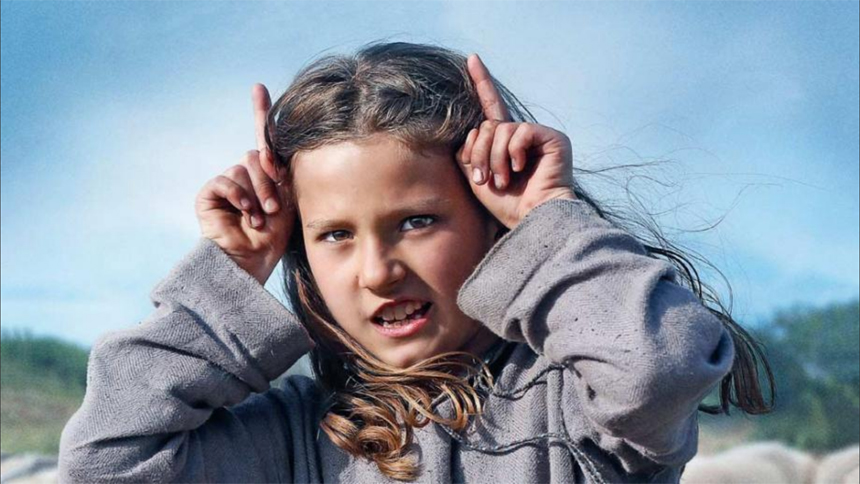 It does makes sense that Bruno Dumont's latest is about Joan of Arc. She personifies the religious devotion and spirituality, so it comfortably fits in his filmography - alongside Hedewijch, Outside Satan and Camille Claudel 1915. It also seems like a logical progression that Jeanette: The Childhood of Joan of Arc is a musical comedy: as he brazenly makes it clear since his first foray into comedy with Li'l Quinquin that comedy is just a flip side of a coin - that his austere films (dotted with bizarre surrealist moments) can easily be rip-roaringly funny when they go two millimeter off center. So why not venture into a musical genre?

Based on Charles Péguy’s The Mysteries of the Charity of Joan of Arc and heavily borrowing his simple but direct ‘musical verses’, Dumont creates a Bressonian musical that is as emotionally resonant and cinematically daring as his other films.

Young Jeanne(tte) (Lise Leplat Prudhomme, and later played by Jeanne Voisin) is a precocious girl living in Domrémy, North-east France (Dumont's beloved home region). She has been praying to god to save France from English invaders to no avail. She converses (in songs of course) with her best friend Hauviette (Lucile Gautier and later Victoria Lefebvre) who counters sharply to her beliefs. Jeannette seeks wisdom of Madame(s) Gervaise – two identical twin dancing nuns and has a religious epiphany of Ste. Marguerite & Catherine (played by the same twin). They sing to her to lead the French army. They conclude their meeting with a choreographed headbanging with heavy metal music.

Then there is Jeannette’s rapping young uncle, Durand Lassois (played by fresh faced Nicolas Leclaire) who serves as a comic relief character. And he’s uproarious.

You have to keep in mind that this is a Dumont film. Everyone involved are non-actors and not trained singers or dancers. When they sing, their abilities are earnest at best. The choreographed dance numbers come across as completely out of place and therefore often hilarious.

Dumont’s full-framed beautiful composition is there, so as the windswept, soft lit sand hills of Brittany, lensed by Guillaume Deffontaines who worked all of Dumont’s comedies since Li'l Quinquin.

No doubt, Jeannette will draw sharply divisive reactions from audiences. For some, the film would come across as a grade school level musical. For others, deeply moving contemplation on devotion- In Péguy’s words, young Jeannette wanted to be a better savior than the savior.

When you think of Joan of Arc, it's usually the haunting close ups of Renée Falconetti's face in Dreyer's poetic masterpiece, The Passion of Joan of Arc that come up to mind. It might rub some the wrong way to have a b-boy moves and falling off a horse in Joan of Arc movie.

Jeannette is a real gamble of a film. In theory, with everything Dumont is striving for, spiritually and artistically, it should satisfy fans of his work. But intellectually understanding what he is up to and enjoying the actual piece are two different things. As a big fan of Dumont, and was taken aback by his ‘comedies’ and repulsed by Slack Bay (I have to say that I’m not a big fan of seasoned actors playing over-the-top characters or acting like retards), I had a lot of reservations going in. But considering Dumont’s intensions with the project, Jeannette gets a lot better in second viewing. You just have to work a little harder to dig through its genre trappings to see its austere beauty: the beauty in a young girl’s unwavering, sacred devotion to god in free form.

Jeannette: The Childhood of Joan of Arc opens Friday, April 13.