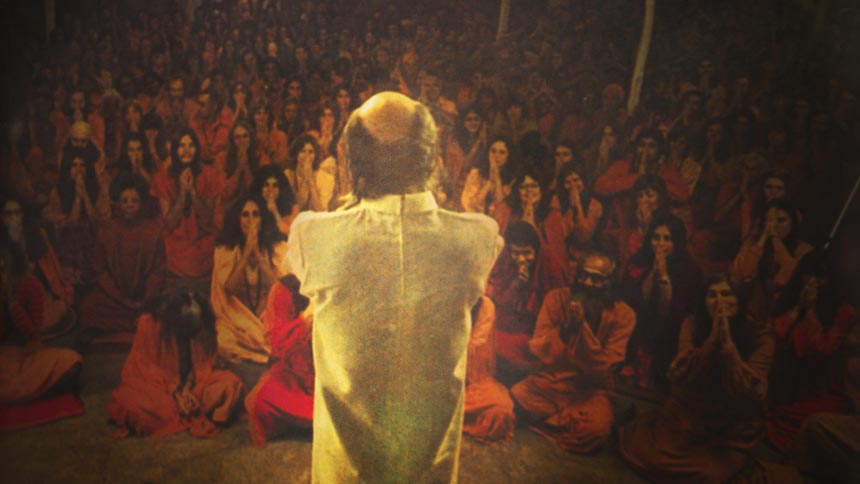 In June of that year, I attended a lonely Saturday morning screening of Raiders of the Lost Ark. Unable to convince any of my friends to accompany me to a movie widely perceived as a 1930s-style serialized adventure by the guy who made that bomb 1941, I found myself nearly alone in the cavernous Mann's Chinese Theatre in Hollywood. I was instantly enthralled.

That same year, a large ranch near the tiny town of Antelope, Oregon was purchased. Neighbors didn't think much of the land, which had long ago ceased being a working ranch and was almost part of the wilderness. Soon, however, the land entered into a phase of rapid development, preparing for the arrival of devout adherents to the spiritual teachings of Bhagwan Shree Rajneesh (aka Osho).

In the Netflix documentary series Wild Wild Country, directed by Maclain Way and Chapman Way, the rise and fall of the religious community known as the Rajneeshpuram is explored exhaustively. Originally from India, the group relocated in search of greater freedom, according to the first of six episodes, and decided on the Oregon property without, apparently, ever talking with the few local residents about their plans.

Throughout the first two episodes, which set up the peaceful, idealistic spiritual seekers against the crusty, mistrustful, remaining residents, who now look back upon the events with smug disdain, it's easy to allow sympathetic feelings toward the spiritual community to develop. Indeed, the town's 40 or so Caucasian residents appear to resent the strangers on instinct; how dare anyone interrupt my peace and quiet, especially outsiders of different colors and races? And how dare they move in, next door to my property, and disrupt my retirement?

The filmmakers create a dichotomy by presenting events in intentionally divisive fashion, first from one perspective, then from the completely opposite perspective. By early in the third episode, I felt that the filmmakers were unnecessarily stacking the deck, and, furthermore, found the events that were showng to be unfolding on national TV programs widly unbelievable. Then I stopped watching, did a little internet sleuthing and realized that the events that took place in and around a small town in Oregon did, in fact, take place in the early 1980s, though perhaps not exactly as shown in Wild Wild Country.

I remember many other things from that era, as non-essential as they may be to other people. I was in my early twenties, and it was in this period that I made many changes in my life and ended up moving to New York City from my native California. Clearly, however, I was not paying that much attention to news stories that did not affect me directly. I had never visited Oregon at that point, didn't know anyone from Oregon, and so forth.

During that same period, I watched hundreds of films and read dozens of books, and interacted daily with other people. But I didn't have the internet, of course, and didn't have access to any 24-hour news channels; perhaps that is also what allowed the Rajneeshah to flourish in a small town in Oregon.

Because as the series progresses, much hidden information about the group is revealed and it's shocking and transfixing. Wild Wild Country doesn't have all the answers and may only hint at a very, very large story that has yet to be told in depth. As a series, though, it's compelling in the old-media sense of the word; I was never quite sure what would come around the corner next.

The series is available to watch on Netflix. Notes on Streaming is a feature on programs of interest on various legal streaming services.