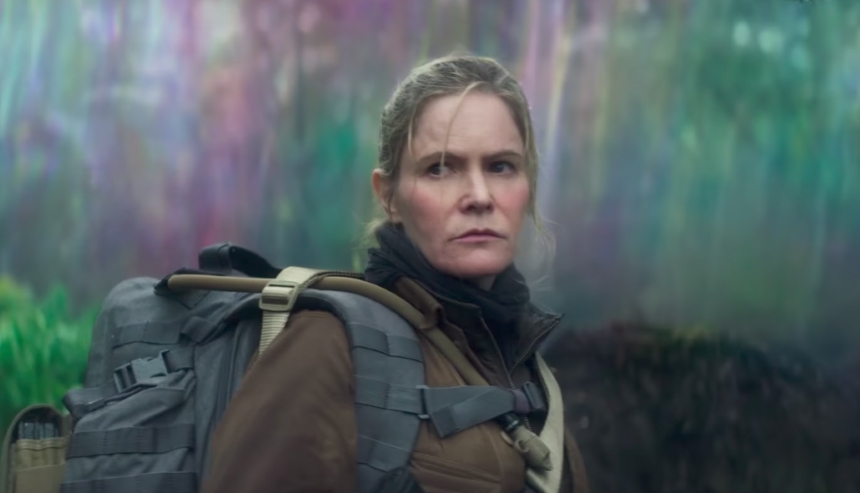 About ten years ago, I found myself musing about speculative fiction novels ripe for adaptation to the big screen. The subject of The New Weird literary movement came up via Alastair Reynold's Chasm City and China Mieville's Perdido St. Station, arguably the pinnacle of the briefly flowering niche-of-a-niche segment of science fiction that aimed to meld pulp adventure with classic literary drama, body horror with cyberpunk, and Lovecraftian terrors with grandiose world building.

Well, here we are with the first New Weird novel to receive 'Big Studio' resources, and it turns out to be Jeff Vandermeer's Annihilation. Adapted here by Alex Garland, riding on the modest success of his directorial debut, Ex Machina, as an infidelity mystery wrapped in big science fiction ideas and a splicing of cinematic DNA of Andrei Tarkovsky and John Carpenter, among others.

Mainstream audiences are likely as not to flee from the cinemas in North America, where it is getting a wide release. International audiences will have to settle for browsing away on Netflix. For you, the Screen Anarchy faithful, who generally exist on the intersection of the Arthouse and the Grindhouse, well, you are in the right place for a wildebeast such as Annihilation. It is exactly the type of ambitious-heady blockbuster that this site exist to exhort value upon.

Lena (Natalie Portman), a US Army veteran who has re-invented herself as a biology professor, still mourns the disappearance of her husband (Oscar Isaac) well over a year past. She is told by a colleague to move on. She cannot. This is mainly because she and her spouse parted ways on a sour, awkward, note due to her having an affair. Being unwilling to talk about, or openly acknowledge, the transgression, he is called away on a classified military mission, from which he does not return.

Suddenly, he shows up, confused, sick, very likely infected with something awful, and a whole government quarantine squad on his heels. Upon being quarantined herself and interrogated (by Benedict Wong, who is always a pleasure to see, however thankless the role), Lena is rapidly --suspiciously rapidly -- recruited for a mission into the 'Shimmer,' a mysterious honey-rainbow curtain blanketing Area-X. Annihilation's opening shot, a comet crashing into a lighthouse to form the Shimmer, is a beautifully rendered homage to The Thing. It is one of several nods to that film, not the least of which is a delightfully uncomfortable use of gore by way of alien violation.

Eschewing character development for atmosphere, and dialogue for mood, Annihilation offers its unconventional chills and thrills with the acrid aftertaste of broken souls wallowing in their unfortunate condition. The exploring scientists ("We're all damaged goods here") include boss-lady Dr. Ventress (Jennifer Jason Leigh), lesbian medic, Anya (Gina Rodriguez), introvert physicist, Josie (Tessa Thompson) and psychologist Cass (Tuva Novotny), are more often than not, canon-fodder to showcase 'The Shimmer' and its mystery-box offerings. The military men who went in before them, were similarly swallowed up by Area X.

Lena's poisoned relationship is foregrounded, via flashbacks, to the point where all of the strange goings-on might be entirely in her head as a kind of coping mechanism; or a gaslighting by the government. Hey, you're not paranoid if someone really is out to get you. I digress. Having not read the source novel, I take writer-director Alex Garland at his word when he admits his adaptation is a dream, of the memory, of the novel; rather than a literal page-to-screen copy.

His creative team are effective at inserting memorable images of biology gone wild. Some are beautiful (flowers growing out of deer antlers, people made of knotty branches) others are full blown nightmare fuel (a tapeworm sequence would not be out of place in Ridley Scott's Alien prequels).

But it is the climax and finale of the film that offers the most memorable visual treats. The third act is equal parts Event Horizon, Melancholia, and Under The Skin. A sharp turn into the abstract, embodied by Ex Machina's Sonoya Mizuno essaying another sublime dance number. This one a hellish bit of not-quite-right synchronicity. It is this point where it becomes clear the films modus operandi favours intuition and the moment over logic and narrative.

Annihilation is less about the plot, or even its relationship/cancer metaphor, and more interested in how we become different people by choice or by tragedy. Our lives become 'a lifetime ago' by the new people we slowly evolve into by our experiences. Profundity arrives more from the visual immersion than any necessarily originality in idea. (The final shot of the film is a kind of kissing cousin to Charlie Kaufmann's Eternal Sunshine of the Spotless Mind.) But rare is the studio picture allowed to be this abstruse, and engaged viewers will leave with plenty to consider while they decompress over a hypnotic closing credit sequence.

GarIand is a savvy connoisseur of genre. As Danny Boyle's go-to screenwriter after they brought his first novel, The Beach to the big screen, they injected a shot of adrenaline to the shambling zombie genre in 2000s with 28 Days Later, and turned in a brilliantly sly theological inquiry in the form of a space adventure Sunshine. He also, quite equally slyly, turned in the best Robocop remake (easily besting both Elysium and the actual Robocop reboot) by way of adapting the Dredd comic book for director Pete Travis.

Garland's cinematic Turing Test, Ex Machina, featured a genius billionaire inventor who describes Ghostbusters, as, 'that movie where a ghost gives Dan Aykroyd oral sex.' In light of the recent remake of Ghostbusters with an all-female cast, Garland has gone ahead and re-envisioned Stalker in the same vein, and made it about as accessible as a Lovecraftian Jurassic Park could ever be. What is the take-away here? Perhaps to look more at the details and less at the whole.

Annihilation is messy, laborious, and scintillating in its own primordial soup of antecedents. Long live The New Weird!

Do you feel this content is inappropriate or infringes upon your rights? Click here to report it, or see our DMCA policy.
Alex Garlandbody horrorGina RodriguezNatalie PortmanOscar Isaacscience fictionTessa Thompson