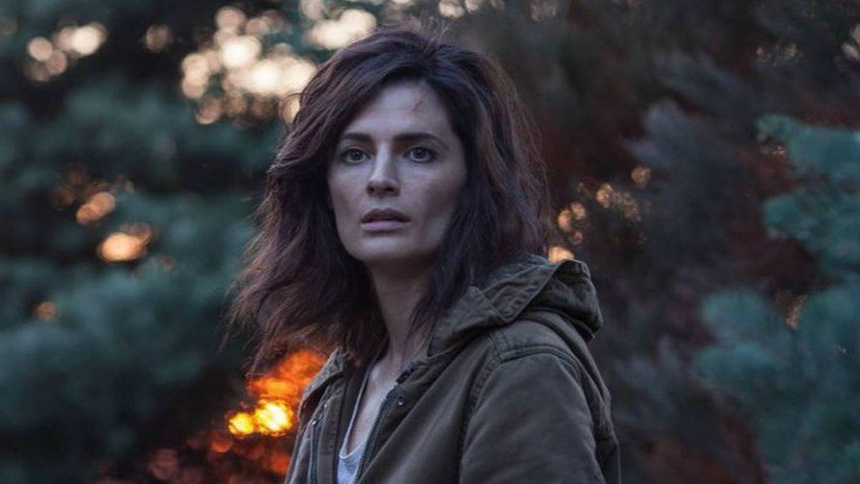 Health alert: before binge-watching Absentia, make sure to limber up your eyeballs, because they'll be rolling in their sockets a lot once the series gets rolling.

In that respect, Absentia reminds me of the first season of the murder-mystery series The Killing back in 2011, which started off strongly before falling prey to the lure of numerous red herrings. My primary reasons for continuing with the steadily diminishing weekly returns were tied directly to superb performances by Mireille Enos, Joel Kinnaman and Brent Sexton.

Likewise, I stuck with Absentia after the first two minutes -- in which the lead character is viciously punched in the face and tossed into a large glass tank, which steadily fills with water -- solely because Stana Katic plays that lead role and also serves as an executive producer on the series.

Katic costarred in the U.S. broadcast network series Castle alongside Nathan Fillion. Their chemistry together and the light-comic tone of the detective show kept me watching year after year, far more than the mysteries themselves. That served as my personal introduction to Katic, an experienced actress who adroitly handled both the light comic tone and the occasional more dramatic nuances required.

The premise of Absentia is that FBI Agent Emily Byrne was kidnapped and finally presumed dead at the hands of suspected serial killer Conrad Harlow (Richard Brake), who was convicted and sent away to prison. Emily's bereaved husband, fellow FBI Agent Nick Durand (Patrick Heusinger), was left to raise their young son alone. Eventually, however, he moved on, marrying Alice (Cara Theobold) and apparently finding a good measure of happiness and contentment.

Six years -- and less than 15 minutes of screen time -- have passed when Nick gets a phone call late one evening from the imprisoned Harlow, declaring that Emily is,in fact, alive, and giving directions to where she can be found. Many repercussions then reverberate along expected fault lines, i.e. Nick feels torn between two lovers, Alice is made to feel like an outsider, their young son acts his age, and so forth.

Familiarity is not always a bad thing, but once Absentia begins tossing out red herrings -- marked by a leading player announcing, "I'm sure that's the guy!," whereupon said red herring ends up dead by the next episode -- it's difficult to remain emotionally involved with the series, especially because it started off on such a nasty, face-punching note.

Now, some people love red herrings in mysteries, and I'm usually fine when they bob to the surface in a novel or film or series, as long as captivating characters abound. Absentia comes up short in that department, beyond its lead character, Emily Byrne, portrayed by Stana Katic.

She is entirely convincing as the former FBI Agent turned 'bewildered by the sudden turn of events' victim turned 'falsely accused suspect -- or is she?' runaway fugitive. We're never quite sure what she may have done during those missing six years, and we begin to question what, exactly, may have happened to her during her childhood, for reasons that are raised several episodes into the show.

As finely-tuned and captivating as her performance proves to be, however, the other characters are far less compelling, with few (or no) layers to be revealed. This is not so much a fault with the actors, who do the best they can, as with the writing. For example, Nick remains actively involved in Emily's case, not as her former husband, who might conceivably be consulted by other agents, but as one of the leads!

Maybe it's just me, but that seems mind-boggling, undermining the credibility of the show. Added to that, he's not openly communicative with anybody, not his fellow detectives, not his supervisor -- he suspects everybody -- not even his new-ish wife, who understandably feels abandoned by a man who clearly harbors strong affections for his first wife.

Nick is teamed up with a local detective named Tommy Gibbs (Angel Bonanni), a former undercover cop who is disheveled and constantly snacking, like Brad Pitt in Steven Soderbergh's Oceans caper flicks. That's the extent of Tommy's characterization: disheveled and snacking. But it helps, a little, because the actors playing Nick and Tommy are both white guys in their 30s with facial hair and similar builds, so during the first few episodes, I had to keep staring to see which one of them was eating to distinguish them.

The lack of a real-world setting -- it's supposed to take place in and around Boston, Massachusetts, but was actually filmed in Bulgaria and looks quite anonymous -- also works against it. (Really, couldn't they find anyone who could pull off a phony 'Baaastan' accent, even for laughs?) Not that local settings would make up for other deficiencies, but at least it would distract.

All 10 episodes of Absentia began streaming on Amazon Prime on Friday, February 2. In Canada, Showcase is airing the show episodically on Sunday evenings. 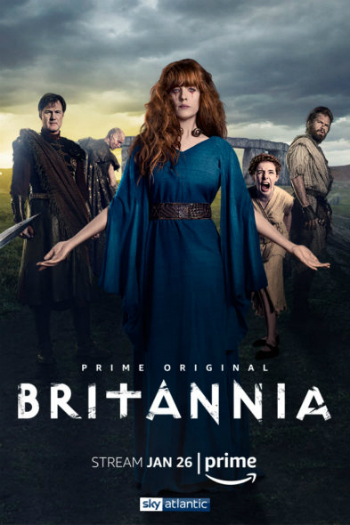 Speaking of Amazon Prime, last September it was reported by Variety that CEO Jeff Bezos wanted a shift in programming strategy by Amazon Studios toward "high-end drama series with global appeal." Five new projects, including one from Wong Kar-Wai (Tong Wars) and one from Seth Rogen were announced. Amazon Studios boss Roy Price talked about his interest in finding something akin to Game of Thrones as "a model for a hit."

Since then, Price has stepped down amid accusations of misconduct and several more of the service's shows have been dropped. In the meantime, the original anthology show Philip K. Dick's Electric Dreams hit Amazon Prime in early January, and now British historical drama Brittania has made its debut on Amazon Prime as well. (It's also available on Sky UK.)

The series is a co-production between Sky and Amazon Prime and has been in development since August 2016. Still, I can't help wondering if Jeff Bezos saw this show last summer and said, 'Yeah, that's what I want.' (Officially, Amazon talks about providing what consumers want, blah blah blah.)

Set in 43 A.D., Brittania takes rough inspiration from the real-life Roman invasion of Brittania. General Aulus (David Morrissey) leads his forces against rival Celtic tribes: the Canti, led by Queen Antedia (Zoe Wanamaker), and the Regni, led by King Pellenor (Ian McDiarmid). Exerting a heavy influence upon everything are the Druids, led by an ancient soul who claims to receive direction from the gods.

Running around as wildcards are Cait (Eleanor Worthington Cox), a young girl whose family has been slaughtered, and Divis (Nikolaj Lie Kaas), a cast-off druid who sees visions and can control others with his magic. An even bigger wildcard is Kerra (Kelly Reilly), the daughter of King Pellenor, who has her own, independent ideas about her people and the future of the land.

It's a sprawling story, conceived and largely written by Jez Butterworth and Tom Butterworth with spicy dialogue, historical inaccuracies, and cheery confidence. It's not written for ignorant Americans, such as myself, but for people who know the period and its importance to Britain. Very occasional jocularity aside, Brittania is an impassioned paean to mighty warriors and noble diplomats, as it becomes evident that Roman General Aulus is pitting the tribes against each other so he can achieve victory and assume control so that Rome can collect taxes.

In effect, Brittania makes the case that the first-century Celtic people were duped and robbed. Dressed up with costumed extras, a fair amount of bloodshed, and the always fascinating, always commanding presence of Kelly Reilly, the series is fairly entertaining through its nine episodes, though it pales in the shadow of Game of Thrones.

Notes on Streaming is a regular column about films and television shows that are available to watch on streaming services.