PITY Trailer: The Director of Absurdist L Returns With a Man Existentially Addicted to Sadness 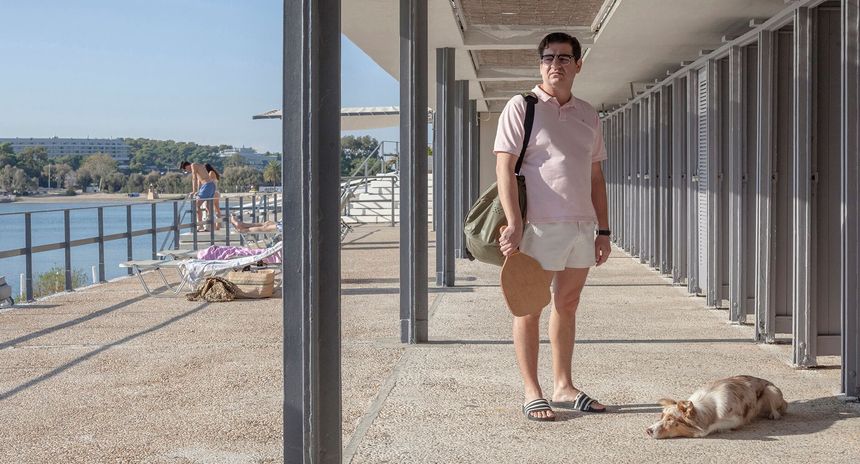 Greek filmmaker Babis Makridis made a splash with absurdist dramedy L (read the review) about a man living in a car. Riding the tide of Greek New Wave, Makridis emerged as more absurd, deadpan and abstract version of Yorgos Lanthimos.

“Samuel Beckett is my favorite author, I love the simplicity of his writing. He does not use literary tricks. His language is simple, minimalistic but effective. With this simplicity he manages to reach deep into the human soul and human despair. This is the cinema that I like. The cinema that does not use cinematic gimmicks. Only with the simplicity, cinema can become a powerful narrative tool. The camera must be discreet and modest. Only then is tender to the characters and the story,” revealed Makridis while adding more inspiration that formed his personal style. “I like Dostoyevsky for the power of his characters and James Joyce for his writing rhythm”.

Six years has passed since his first feature-length offering and his sophomore film Pity is ready to roll out at Sundace, soon followed by screenings at Rotterdam and Göteborg festivals. “You must explore life by yourself in the way you can and you like. I am a person who actually doesn’t live life. Life is boring and sad. Maybe that is the main reason for my thoughts about filmmaking,” said the director during a talk about L which eventually led to the revelation “That’s why I don’t like realism. I think you can explore life only if you see it with abnormal lens”. And he surely dons abnormal lens following a man who peruses sadness as air he breathes. Constant unhappiness is an existential paradigm of the masochistic kind and a lovely parable as well.

“The story of a man who feels happy only when he is unhappy, a man addicted to sadness, who has such need for pity, he’s willing to do everything to evoke it from others. This is the life of a man in a world not cruel enough for him.”

Not trivial is the fact that Pity, as L, was co-written by Lanthimos´ brother-in-pen Efthimis Filippou (Dogtooth, The Killing of a Sacred Deer). “When you share the same partners with other colleagues you cannot avoid similarities. You choose your partners for the way they are thinking. If you try to change it, you may lose their qualities. We are all friends for years. But we are also so different,” said when discussing the collaboration on L however it is fair to assume the similar tone was applied on Pity. The director even curated a series of “stay sad” playlists to instill the right mood.

Check out the trailer.