Michael Palin stars as a peasant in Terry Gilliam's solo directing debut, a comic adventure from the 1970s. 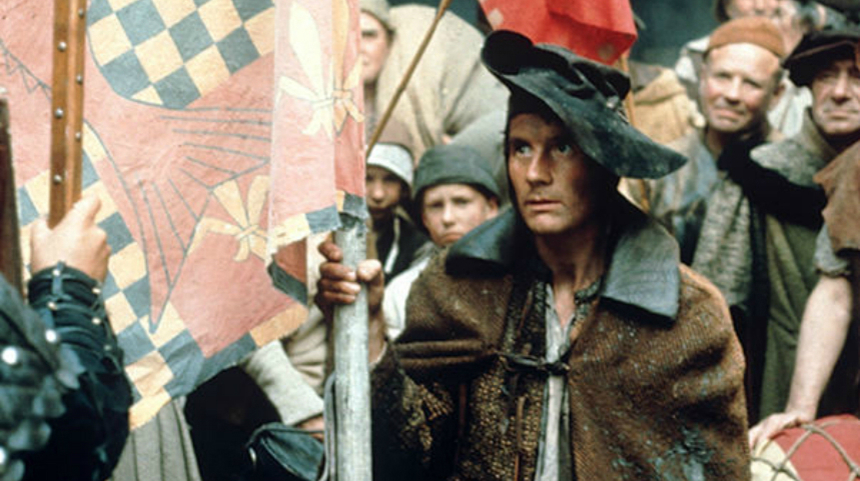 Surprise! The delightful, self-deprecating audio commentary by Terry Gilliam and Michael Palin is what sold me on Jabberwocky, a very British film loosely inspired by Lewis Carroll's poem.

Released in the U.K. and the U.S. in April 1977 -- two months before Star Wars -- the film was savaged by critics, as Gilliam recalls, though it did better in territories where Monty Python and the Holy Grail had not been released, such as Germany. Indeed, the original release did not leave a mark in my memory, though I recall it frequently playing on the lively repertory circuit in Los Angeles in the late 1970s and early 80s.

Of course, I was a latecomer to the entire Monty Python phenomenon, since the show was broadcast on a UHF station and we didn't have sufficient antenna strength to pull it in. Sad, isn't it? Well, it was a tragedy to me, since my friends regaled me with their poor imitations of numerous Monty Python sketches, thus rendering them far less funny when I finally caught up with them years later.

All that to say that director Terry Gilliam has been (mostly) a blind spot for me, so when the opportunity to see and review Criterion's new Blu-ray edition of Jabberwocky arose, I grabbed it. On Monty Python's Flying Circus, Gilliam's animation drew very favorable notice, and the great success of Monty Python and the Holy Grail, which he codirected with Terry Jones, led to the opportunity to make Jabberwocky.

My first viewing was disappointing, to say the least. I think I was expecting daffy humor to abound and instead Gilliam concentrated on the narrative. The pacing is very typical for the 1970s: relaxed, lackadaisical, in no hurry to get anywhere. That's fine and I expected that sort of pacing.

As the film got underway, I realized it's been a long time since I've seen any of Gilliam's films, so I tried to relax and allow myself to sink into the story and atmosphere. But ... maybe it's just me. I wasn't connecting with it very well at all, and quickly lost active interest, even though I finished watching it to the end. 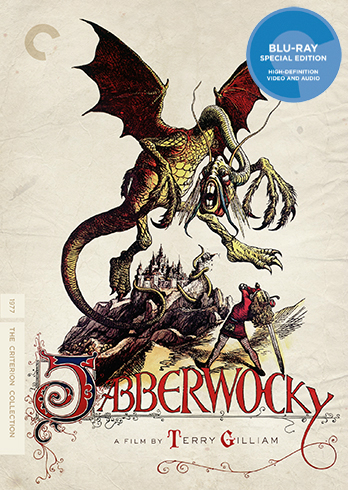 This morning, I watched it again while listening to the audio commentary by Gilliam and Palin, recorded in 2001 for the initial release on DVD. Clearly, Gilliam and Palin remain good friends and their genial, amusing commentary frequently made me laugh out loud. They have very positive memories about the production, happily identify and credit all the supporting actors for their performances and improvisations, and detail the challenges they faced with a low budget.

They also freely acknowledge that not everything works in the film. Palin plays the lead role, Dennis Cooper, the simple son of a barrel-maker in medieval times who decides to travel to the 'big city' -- or castle, in this case -- and find work so that he can prove worthy of marrying Griselda (Annette Badland), his one true love, who has no interest in him at all.

Meanwhile, a horrible, man-eating monster terrorizes the countryside, and Dennis becomes involved in vanquishing the beast, and, well, even watching it a second time, I lost track of the storyline. But, after listening to the audio commentary, I want to watch it again!

Indifferently paced as it is, Jabberwocky shows a ton of promise, which was manifested further in Gilliam's next three films, the galloping Time Bandits, the masterful Brazil, and the curiously beautiful The Adventures of Baron Munchausen. As Gilliam acknowledges, he was still learning, so this is a valuable addition for those who treasure his films.

The new Criterion Blu-ray probably makes the picture look as good as possible. Gilliam intended it to look muddy and dirty, reinforcing the time period and subverting expectations for period films, and he certainly accomplished that: it's non-polished and appears quite grungy.

In addition to the audio commentary, Criterion includes a good selection of features.

-- Jabberwocky: Good Nonsense. A new, and quite fascinating, 41-minute 'making of' documentary produced by Criterion, featuring Gilliam and Palin, as well as producer Sandy Lieberson and actress Annette Badland. Gilliam provides great background on what led up to the film, while Palin, Lieberson and Badland share their perspectives and recollections.

-- Valerie Charlton: The Making of a Monster: Special-effects artist artist Charlton talks frankly in this new, very good 15-minute feature, and how she ended up making the titular creature. Gilliam makes reference to this incident in the audio commentary, but Charlton fills in all the details.

-- Terry Bedford: Audio excerpts from a telephone interview conducted by writer David Morgan with the cinematographer in 1998. The 22-minute conversation also covers Bedford's work on Monty Python and the Holy Grail and how things worked with the crew. Bedford also explains the frictions that arose between him and Gilliam during production.

-- Original Opening: The original UK title treatment differs from its subsequent U.S. title treatment, which is alluded to the audio commentary. This original opening runs 3 minutes.

-- Sketch-to-Screen Comparison: Gilliam's original artwork is compared with the corresponding scenes in the finished film. It's a 7-minute feature, which is exactly as advertised; it's fun to see Gilliam's rough yet detailed sketches transformed.

-- Trailer: A very clever trailer that runs just 87 seconds and features dialogue-free footage from the film, following by ... jokes! Yes, I liked this very much.

-- Lewis Carroll's "Jabberwocky": On video, Palin and Badland give a dramatic reading of the poem. Very stirring!

Do you feel this content is inappropriate or infringes upon your rights? Click here to report it, or see our DMCA policy.
CriterionLewis CarrollMichael PalinTerry GilliamUK