Warsaw 2017 Review: A BALKAN NOIR Delivers What It Promises 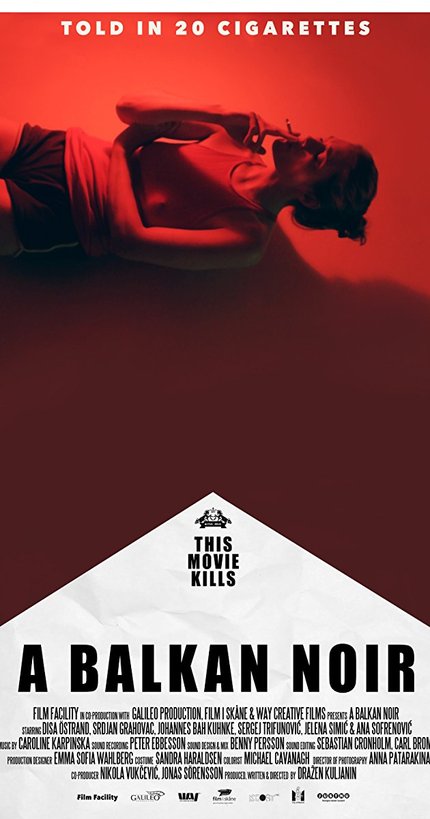 Born in Bosnia and now based in Sweden, filmmaker Dražen Kuljanin has returned to the screens of the Warsaw International Film Festival, where he won the main award in 2014 with his feature-length debut How to Stop a Wedding. Kuljanin dazzled audiences with a feat of shooting the film during a train trip from Malmö to Stockholm, which is exactly five hours and seventeen minutes.

In his followup title A Balkan Noir, Kuljanin once again joins places together, this time Sweden with Montenegro. A daughter of Swedish couple Nina and Oscar went missing while the family enjoyed a vacation in Montenegro. Even after five years, Nina remains on high alert, looking for tiny clues that might lead to a perpetrator, as she is unable to move on her life until a kind of closure is provide. Oscar just tries to move on with his life, as best he can. The couple, now separated, wrote a book about the ordeal. She reprimands him that he buried their daughter without her body.

The story of a grieving couple intertwines with a Montenegro hardboiled policeman who has problems of his own. Still, though the trail is cold, he flags the parents about a potential clue. Nina ventures on a quest to exert justice in the old-fashioned manner of an eye for an eye, while Oscar hesitantly joins her, although he has doubts of his own.

Kuljanin delivers what could be described as a Balkan take on Frank Miller´s neo-noir Sin City, crossed with a portrait of a broken mother fuelled by an unquenchable thirst for revenge, along with a painfully tangible desire to cause suffering, as well as a borderline sado-masochistic state of a mind and body. As the Balkan is considered the Wild West of Europe, the prominence of organized crime, and cops whose credo to serve and protect is being applied in a slightly twisted  way make their presence know, Nina (played by Disa Östrand) and her unleashing of destructive female power and rage becomes the star of the movie.

The camerawork, editing (courtesy of Kuljanin) and plot copy the protagonist's mindscape, channeling rawness and frenzy. Occasionally, DoP Anna Patarakina, who worked on Kuljanin´s first feature, employs music video techniques; she shot a handful of those, so the visuals are premediated, if a bit mannerist. Kuljanin constructs the narrative as a thriller with several blind shots, the elliptical storytelling maintaining tension, with occasional timidly surreal digressions. The raw writing-directing mannerism goes hand in hand with the cinematographic one.

As the notion of a tight timeframe accompanied the director's first film, he devised another way to pace his followup. On the film poster, mimicking a blow-up of a cigarette pack, a brief description stands above the title: "Told in 20 Cigarettes". Besides rage and revenge, the main character seems fueled by tobacco as she, and the supporting characters, display an ever-increasing penchant for smokes.

Small white rolls of tobacco are not only alternative measuring units and indispensable props,  though. Almost all of Kuljanin's mannerist shtick revolves around them, from using almost stroboscopic micro-cuts every time somebody tries to light a smoke to inserting black and white odes to cigarettes. The outdated and unsophisticated period commercials work as chapter separators and tension sustainers when cutting from one scene to another. Furthermore, the prominent role of cigarettes acquires further metaphoric quality. They symbolize urge, an impulsive urge that governs Nina's headlong decision-making and impetuous behavior, revealing the hunt for justice being just a cover for a darker and more primal drive.

A Balkan Noir mixes family drama and trauma with a hybrid of thriller, Western and gangster conventions, enveloped in a formalistic experiment to serve up "revenge in 20 cigarettes". Moreover, the title aptly describes what the director delivers.

Do you feel this content is inappropriate or infringes upon your rights? Click here to report it, or see our DMCA policy.
Disa ÖstrandDražen KuljaninJohannes KuhnkeSergej TrifunovicSrdjan GrahovacSwedenWarsaw 2017