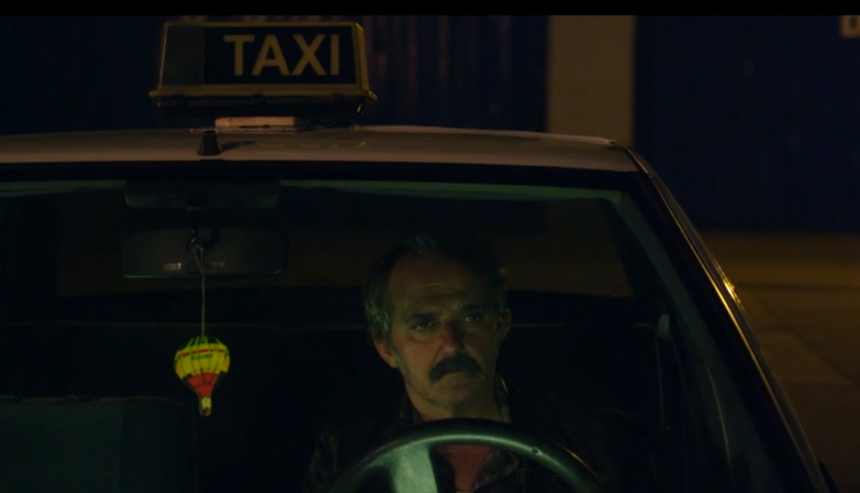 First time director Andrés Goteira wants his audience to play a game. He is open and up front about this early on by inserting his own audience into the opening shots of the film, and will come back to them periodically to remind you that things here are a construct. To further hammer this home, two members of the theatre staff have a discussion in the back alley of the venue about how children's games like 'I, Spy' can have deep philosophical roots. As in, do you, in fact, truly see what I see?

In the tradition of Christopher Boe's Reconstruction (which also is up front with its audience about its intentions to play with them), the film proper begins with a business man making small talk with a taxi driver, before getting into an argument with his wife over the phone about the extracurricular activities of their son. From there, he meets mysterious woman in a floral print dress at a hotel bar. They flirt. "I like to make people feel uncomfortable" she says. He, being nearly twice her age, is more suprised the encounter is playing out at all. The bar staff are pregnant with reaction shots as their conversation becomes more forward and graphic. An entertainment for sure in an otherwise empty establishment on a quiet night.

If only the film could maintain the rhythm and charm of this opening vignette.

Instead things get rather academic and shrill very quickly, as the real game of the film is to challenge the audience by chastising their desire for sex and violence. At this point the film begins to resemble a poorer cousin to Funny Games (with a soupçon of Leos Carax's Holy Motors.) All the criticisms levelled Haneke's film, either German version or English remake, are only magnified here. Now I believe that both films work because he has a strong ability to bring us back into the story, before coldly slapping us in the face, in a tightening cycle.

Goteira ambitiously leaps through a series of scenes and situations to put the lead actress through the ringer. Beatings, shootings, rape are all par for the course (with misogyny slathered on thick), as the film leaves the urban locales behind for lonely sun blasted gas stations and dusty fields. But there is the constant cutting back to the constructed film audience, comfortable but docile, more mute than in shock, before the film eventually pulls out the rug from under them and us.

But it is nihilism without the satire or glee, and after a short time, it begins to feel like punishment. Even if it has something to say about the increasing diversity and personalized control of our entertainment options, from theatre, to film and television, to videogames, leading to the most base of human desires (shades of Videodrome's snuff and sex network), engaging with this thesis is undercut by the tone being either too blunt or too convoluted. Perhaps both. Should I be enjoying the puzzlebox or should I hang my head in shame at the scolding? The film incriminates with its very title: we are dogs, we are pigs: Dhogs being kind of a portanteau of dogs with hogs.)

A lonely man speaking to his dog at one point comments, "The soil here is hard." Yes, it is, and barren. Your mileage may vary.

Do you feel this content is inappropriate or infringes upon your rights? Click here to report it, or see our DMCA policy.
DhogsSitges 2017Andrés GoteiraAntonio Durán 'Morris'Milo TaboadaMiguel de LiraMelania Cruz