Review: THOR: RAGNAROK Brings Color and Joy to the End of the World 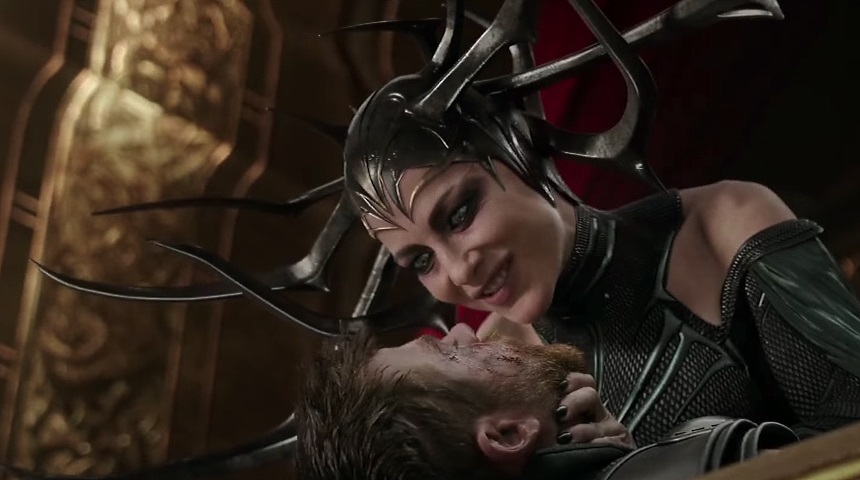 The many films in the Marvel Cinematic Universe (henceforth called the MCU) have all opted for either of two strategies. Number one is to follow a thriller path, and try to edge a title towards the realms of realism and respectability. Think Iron Man and Captain America: The Winter Soldier. Strategy number two is to go for broke with an outrageous premise and, presuming the audience is on board with that anyway, just try and have as much fun with it as possible. Think Guardians of the Galaxy and Doctor Strange.

The Thor films haven't had it easy in this regard. While definitely a "strategy two" character, Thor is a member of the Avengers, and Marvel has had to try and cram the Asgardian God of Thunder into a "strategy one" hole, the better to have him fit with his team members.

But with Taika Waititi's Thor: Ragnarok, the gloves have come off it seems, as the film fully goes for "strategy two". The end result is one of the barmiest and funniest Marvel films yet. 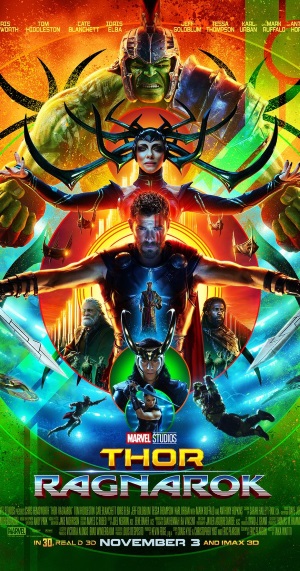 In Thor: Ragnarok, Thor keeps having premonitions about Ragnarok, the prophesied end of his world Asgard, and starts to investigate. What he discovers is troubling: for those who have seen Thor: The Dark World (or waited till after the end-credits of Doctor Strange), it will come as no surprise that Odin the All-father isn't, strictly speaking, All There. And Odin's absence has attracted a VERY dangerous enemy: Hela, the Goddess of Death, who wants the throne of Asgard for herself to start an intergalactic war of conquest.

An initial clash between Thor and Hela ends badly, with Thor losing his hammer and being flung to a garbage planet at the other end of the universe, where he is immediately captured by an evil alien called The Grandmaster. Forced to perform as a gladiator in The Grandmaster's arena games, Thor must find a way to escape, and stop Hela. Can Thor halt Ragnarok, and save Asgard and the universe?

If this sounds like bombastic run-of-the-mill hero-on-a-desperate-quest stuff, that's because it is. It is a surprisingly dour tale even, as Hela proves true to her title by performing massacre after massacre, ridding the MCU from many a side-character even. But all the grim death and destruction is expertly offset by loads of wit and a gleefully fun, colorful approach to nearly every tired and trusted trope. I was afraid Taika Waititi might, after a solid decade of quirky gold, stumble and fall over the double whammy of Marvel's needs and a huge budget. Thankfully, my fears have been proven wrong.

All of the regular actors (including Mark Ruffalo as Bruce Banner / The Hulk) don their roles like a pair of well-worn shoes, and MCU newcomer Cate Blanchett makes for a magnificent presence as Hela, which is impressive as her role is written with all the depth of a tissue. Jeff Goldblum's turn as The Grandmaster will either delight or irritate you, as he's just bringing his usual persona to the table, neither elevating the film nor derailing it.

I've heard some people describe this as the best MCU title yet, but in my opinion that is giving the film a bit too much honor. It is definitely one of the funniest though, with many laugh-out-loud moments, and it's as gaudy as a rainbow-colored piece of gold. If this is an indication of Marvel's road ahead, the upcoming Infinity War films will be something to look forward to indeed.

(Note: Can someone tell me how to get Led Zeppelin's "The Immigrant Song" out of my head? It's a great ditty, but it's short and has been there for DAYS now already...)