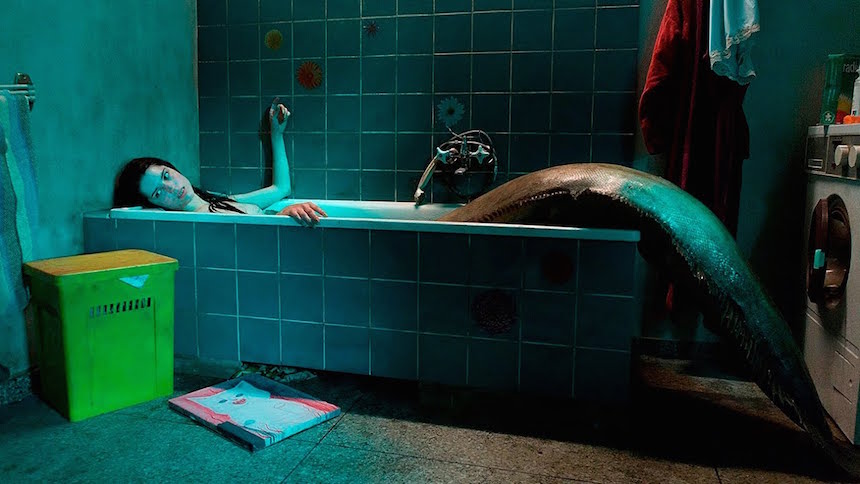 Part of the appeal of the Criterion Collection for lovers of film is its simple act of curation. Though weighing in at over 900 titles in its current run (The Lure is #896, hitting stores October 10), the collection still shrouds its selections in the intrinsic notion that the company has picked its films for reasons -- a classic of cinema here, an underserved early work by a master filmmaker there.

A debut film by a Polish director who tackles Hans Christian Andersen's The Little Mermaid as a glam-pop musical set in the 1980s and featuring singing stripper mermaid sisters? Why not?

Agnieszka Smoczyńska's The Lure, from 2015, is neither an all-time great debut (though on ambition alone, it is certainly impressive, and marks Smoczyńska as a filmmaker to watch) nor a particularly successful musical. Its storytelling is shaggy and disjointed and it arrives at some points too bluntly, others too vaguely.

And yet, watching the film over the weekend, I couldn't help but feel like I was watching someone's new favourite movie -- a lot of someones, actually, who will be attracted to The Lure's lure (sorry) off the strength of its imagery, and never leave it behind. I myself became aware of the film through a brief cycle of Tumblr memes that flirted with my feed last year.

There's no denying that the film's core premise -- teenaged women on the verge of transformation into something else, being exploited and commodified by a male-gaze-leaning society around them, and eating that male society in return -- tilts impressively mythic, and stays with the viewer long after the final pop song has dribbled off the screen.

The Lure is also unabashedly chewy as a piece of reframed exploitation cinema. The mermaids -- Golden and Silver, played with impressive singing chops by Michalina Olszańska and Marta Mazurek -- are naked almost constantly (no clamshell bras in the Baltic, apparently), and occasionally sprout piranha-fangs to assault their victims. If literally the second word out of a creature's mouth is "We promise not to eat you," arguably, you should leave them in the water, but the gore quotient here is high, and the carnage inexorable.

When Silver elects to lose her tail in favour of staying ashore with a less-than-worthy prince, the film excels. A stylish transplant operation sequence with splatters of blood for Silver's self-harm is followed by a scene of her showing her newly-installed vulva to her boyfriend, complete with patch of pubic hair (the mermaids having been described previously as "smooth as Barbie Dolls"). In every language a film can use to describe her, Silver is now a "woman," but her now-heteronormative body can't please the boy she's pledged it to.

It's a striking moment, rich and dark in meaning, and the results are predictably disastrous. Smoczyńska lands the film's conclusion -- breaking from both Andersen and Disney, quite a feat -- with a lingering question of what women must become to survive in a world that so capably betrays and exploits them.

Painted in vivid tones of aquamarine and pastel pink, The Lure is an impressive sight on Blu-ray. The disc is strongly supported by a 40-minute documentary about the making of the film, the sort of thing we're seeing less and less of; with interviews with Smoczyńska, her writer Robert Bolesto, and several of her key collaborators, it's nearly as useful as a feature-length commentary track.

Even better, we get two of Smoczyńska's student films -- Aria Diva and Viva Maria -- both of which will make you wonder what, exactly, is wrong with film schools in North America. They're both exemplary work. And once again, this is what the Collection does well: shining a light on cinema, in its most intriguing forms.