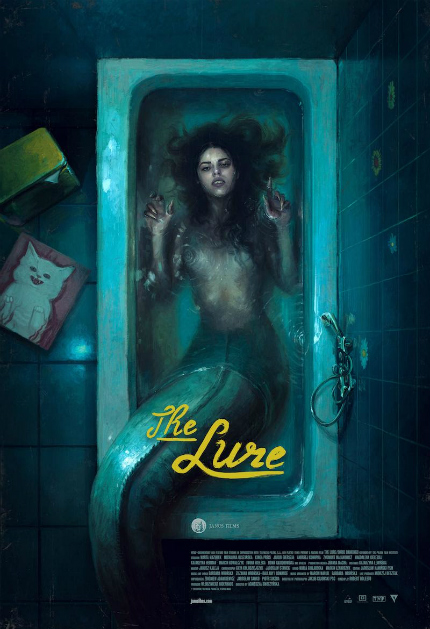 In the crowded world of cinema, many filmmakers set out to try something different. However, it's one thing to be novel, which normally means stretching a thin gimmick over other recycled bits of past films, but another thing entirely to find a new way to tell a story in a 120-year old medium. A tale of mermaids, love, death and song and dance, Agnieszka Smoczynska's The Lure gives us something we haven't experienced before from the outset and continues to surprise throughout its delightful and batty 90 minutes.

With its pair of winsome leads emerging through the water and trying to entice the men of the band into the river through a hypnotic song, The Lure immediately instills an unsettling tone. Yet rather than dive into a sordid horror tale it becomes a voyage of discovery for these mysterious creatures as they are brought into their new home. The club, vividly rendered through inventive production design and colorful characters, affords them a visually engaging and sensual location to explore themselves.

What really makes The Lure stand out are its show-stopping musical set pieces, which range from rock and ballads to folk, and, in one unforgettable sequence, shows us the two young women beckoning to us with enthralling harmonies while the rest of the crowd revels around them in slow motion, oblivious to everything but the moment and sensation they find themselves in.

As with many debut works, particularly ones with such a bold tone, The Lure at times bites off more than it can chew. While it presents us with a wealth of fascinating characters, all matched to fantastic performers, some of the people in the narrative fade into the background as their plots strands remain unexplored. The film also runs into some trouble when it tries to wrap up only some of its narrative's threads in the climax. But with all the imagination, ambition and verve on show, these quibbles are from life-threatening.

The Polish mermaid horror-musical you never knew you wanted, The Lure is an electric debut from director Smoczynska.

Review originally published during Fantasia in July 2016. The film opens today at the IFC Center in New York City via Janus Films.