Review: THE HITMAN'S BODYGUARD Shoots Wide of the Mark 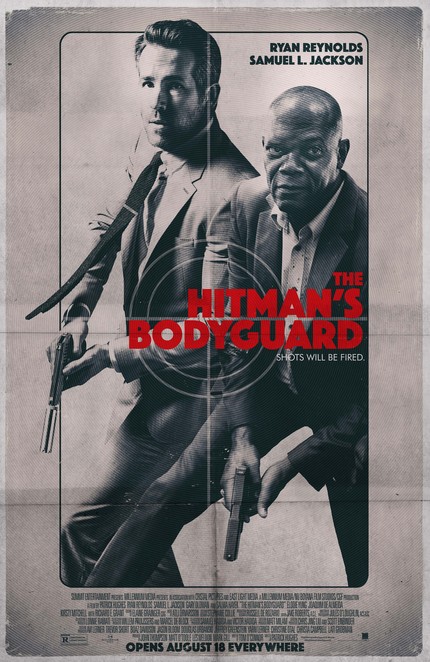 Spoiler: Patrick Hughes' The Hitman's Bodyguard ends with a post-credits stinger in which Ryan Reynolds sits at a bar, waiting for his cue only to be put off by a five-minute church bell song, and ultimately ending with a half-funny gibe about this being the "director's cut". Somehow, this little behind-the-scenes vignette says more about the experience of watching the film than probably anything I could put together on my own.

The Hitman's Bodyguard is about a hundred and ten minutes of stale gags punctuated at odd intervals by remarkably familiar feeling stunt work that just didn't work for me.

Ryan Reynolds is a formerly great - AAA-rated, as he reminds us frequently - executive security provider who is contracted by his saucy Interpol ex-lover (played by Elodie Yung, identified in Reynolds' contacts as "Pure Evil") to protect a hitman played by Samuel L. Jackson, who is on his way to testify against a brutal eastern European dictator being tried for crimes against humanity at the International Criminal Court in The Hague.

Jackson has agreed to provide this testimony in exchange for the release from an Amsterdam prison of his wife, played by Salma Hayek. The problem is that the Belurussian dictator, played by Gary Oldman in a performance so phoned in you can almost feel his impatience waiting for the ink on his check to dry, seems to have every mercenary in Europe on his payroll and they are all gunning for Jackson. Murder, mayhem, explosions, and double-crosses abound.

The major selling point of The Hitman's Bodyguard is the pairing of Reynolds and Jackson as the Odd Couple, and in that regard, it mostly hits the mark. Reynolds has built a pretty unique niche for himself as the handsome smartass and has parlayed that talent into several quite well-received films, including last year's mammoth worldwide sensation, Deadpool. Samuel L. Jackson, well, you know what he does, and he does it here. A lot. Reynolds quips, Jackson swears, someone fires a gun, everybody runs, they jump in a car, shit blows up; lather, rinse, repeat.

At one point the film even acknowledges the fact that it is parodying these actors personas on screen when Reynolds says that Jackson has "ruined the word motherf***er" for him. Unfortunately for everyone involved, simply recognizing the fact that you're being derivative doesn't excuse you from hacky dialogue, and boy-howdy does The Hitman's Bodyguard have some hacky dialogue.

Have you ever seen those videos where some nerd with too much time on their hands strings together a bunch of videos to make it look like the President is singing "Total Eclipse of the Heart" or something? That's exactly what The Hitman's Bodyguard feels like, a greatest hits compilation of proven Ryan Reynolds and Samuel L. Jackson zingers, the AM Gold of action comedies.

The Hitman's Bodyguard isn't all doom and gloom, there are glimmers of creative thought sprinkled in there as well. There's one sequence in particular in which Reynolds is being chased by the central goon through the streets of Amsterdam that leads of a pretty fun hand-to-hand action setpiece in a restaurant and eventually a hardware store, but by the time it rolls around the audience has pretty much lost interest in the goings-on.

It's even more frustrating because this sequence, the best one in the film, probably cost 1% what any of the other crazy overblown car chases in the film did. The film does manage to eke out a laugh or two on the way to its overblown '90s action-esque ending, but there is nowhere near enough payoff for the commitment.

What can I say, Reynolds and Jackson fans will have little reason to complain if they walk in to the film expecting them to behave as they have in most of their recent work, but anyone hoping to see an interesting, engaging buddy dynamic will probably leave disappointed.

Even the action, which is pretty much all the film has to fill the void between contentious bouts of banter among the leads, isn't particularly exciting. I wanted to like this film because I am a fan of Ryan and Sam, but all The Hitman's Bodyguard inspired in me was the desire to go back and revisit the films where they were actually good, and not just Tickle-Me-Smartass dolls programmed with the same gags they'd done for years when you squeeze them.

Do you feel this content is inappropriate or infringes upon your rights? Click here to report it, or see our DMCA policy.
Patrick HughesRyan ReynoldsSamuel L. JacksonTom O'ConnorElodie YungTsuwayuki SaotomeRoy HillActionComedy