Review: MACHINES Succeeds in Being Both an Art Film and Biting Social Commentary

Rahul Jain's documentary was shot entirely in and around a textile factory in the Guajarat region of India. 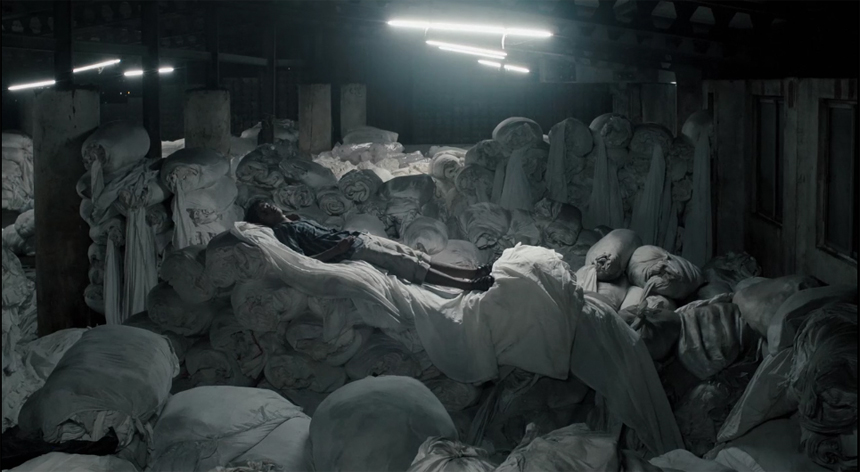 But the high resolution digital technology renders wonderfully in documentary filmmaking, capturing nitty-gritty details of everyday life that was not possible with shooting on a film stock. In comparison and in context, I can think of Forest of Bliss, a lyrical documentary depicting life and rituals in Benares, India, directed by much-revered documentarian Robert Gardner.

Even though I have a film background and am a big fan of anything shot on film (just the sight of 16mm shot, grainy images triggers Pavlov's effect on me), seeing that deteriorating film reel projected on screen -- scratched, high contrast, with no details in the shadows -- I can only speculate what Gardner, Malle, Van der Keuken and a lot of other great documentarians could've captured with light(er) weight, larger censor cameras that can shoot 6K to 8K images for hours on end without stopping.

Machines, a film by Rahul Jain, answers that possibility. Shot entirely in and around a textile factory in the Guajarat region of India, the film doesn't only depict the everyday working conditions of the hundreds of manual laborers, but also captures it in a startlingly clear, beautiful imagery.

Using only medium to wide lenses, Jain invites us into the giant, labyrinthine factory where shirtless male workers go on about their work day. Even though the process is pretty heavily machinized on the floor, each step of the process needs human hands and eyes: moving the heavy loads of fabric, dragging paint drums from one place to another, the actual silk screening process, mixing paints, guarding fabrics through the machines, keeping the furnaces going, maintaining the axles of the machines. Their shifts in the factory require long, grueling, hard work.

Perfectly framed, these static shots of the interiors of the greasy, grimy factory, lit only with cold, dim fluorescent lights, is strangely, hauntingly beautiful. Colors and texture -- steam, metal, glistening human skin, the brightness of the fabric they produce -- all contrast/accompany each other in mind-boggling detail on the screen.

Without a swooping score to manipulate audience's emotions, he silently observes the workers and they in turn talk about their working conditions. The filmmaker rightfully excuses himself from being seen or heard, leaving his silent questions to be answered by workers in a breathtaking 360 degree shot just outside the factory, surrounded by workers.

They came to Guajarat because there is work. Their travel cost put them into debt. Their 12 hour shift pays 300 rupees (about 5 US dollars). They have a short break, then go back for another 12 hour shift. The only thing they can afford is chewing tobacco which will keep them awake.

They talk about the futility of organizing; who has time for union activities? In debt and exhaustion, they literally can't afford to go to a union meeting. It's a vicious cycle. Jain interviews the management also. A boss gives a speech that's right out of some early 20th century capitalist handbook: "If the workers get paid more than what they get now, they get lazy. They need to be hungry to be a good worker."

There is an imminent danger we feel when a child worker nods off while on the job, then there's a tranquility in the shots of workers taking a nap during their break wherever they can. It's all beautifully captured. Even their makeshift raincoats, a big plastic bag with the hole for their face under a torrential downpour, are beautiful.

Bosses vs workers is an age old subject. But Machines is a visually sumptuous observation piece that transcends being a mere social commentary.

Machines will have a one-week engagement, August 9 – 15, at Film Forum.