Notes on Streaming: THE LAST TYCOON, Searching for Optimists in a Sea of Cynicism 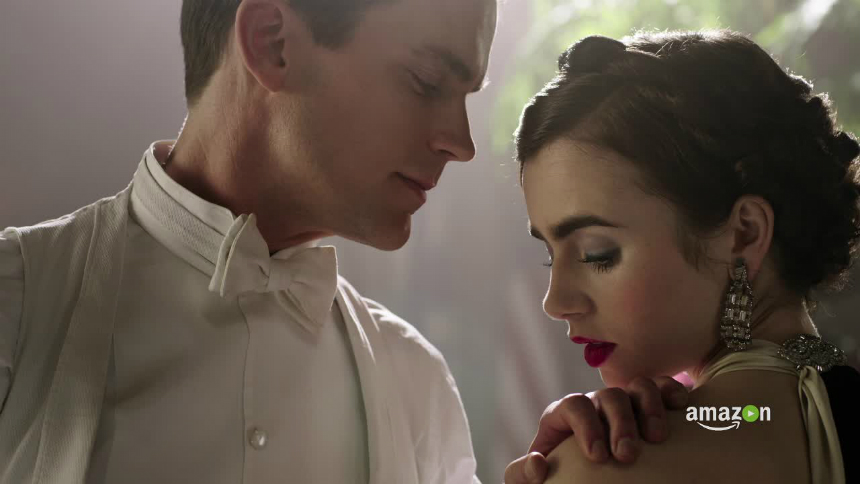 Old Hollywood comes to life in The Last Tycoon, inspired by F. Scott Fitzgerald's unfinished last novel, but surely influenced by the machinations of present-day Hollywood.

Fitzgerald's novel, prepared by Edmund Wilson, was published posthumously in 1941, soon after the troubled writer's death. It follows the travails of film producer Monroe Stahr, who was reportedly modeled after the legendary Irving Thalberg, and his conflicts with Pat Brady, a rival producer who was supposedly based on MGM studio head Louis B. Mayer.

Thalberg became legendary during the years he spent at MGM, from 1925 until his early death at the age of 37 in 1936. As head of production, he was credited with guiding the studio to an exalted status, releasing financially successful films that also bore a mark of high quality.

Beginning its story before Thalberg dies, The Last Tycoon establishes Monroe Stahr (Matt Bomer) as a similar sort of fellow, the head of production at Brady American. Pat Brady (Kelsey Grammer) is the studio's founder and head, but resents his reputation in town; while Stahr is recognized as 'a movie guy,' someone who really gets movies and is responsible for all the studio's best movies, Brady is not.

Stahr has been loyal to Brady in their business affairs, yet he's also been carrying on an affair with Brady's wife, Rose (Rosemarie DeWitt) ever since Stahr's beloved wife died two years before. Further complications are provided by Brady's 19-year-old daughter, Cecilia (Lily Collins), who has been nursing a crush on Stahr. While visiting home from college, she abruptly decides to become a producer herself, merrily taking charge of a project drawn from her premise.

As for Stahr, he has a physical condition that is said to be life-threatening, though he doesn't seem to pay it any mind. He falls for a waitress named Kathleen (Dominique McElligott), whose Irish heritage reminds him of his late wife Minna. Meanwhile, the desperate and poverty-stricken Max (Mark O'Brien), who has been squatting on the studio's back lot with his two younger siblings and hundreds of others, talks his way into a job at the studio, meets Cecilia, and ignites a new relationship.

In this transformation of the 163-page original into a nine-episode series, developed by Billy Ray (Captain Phillips, Shattered Glass), Irving Thalberg and Louis B. Meyer (Saul Rubinek) exist as competitors with Stahr and Brady. That allows the fictional characters to have different backstories with, perhaps, greater possibilities for their exploits than if they were entirely beholden to their original inspirations, but neither reaches escape velocity.

Bomer and Grammer are certainly charming actors who make the most of their material, so perhaps they didn't spark for me because of the essential cynicism that marks the series. Collins as Cecilia rang a bit more true; her spoiled, willful daughter of a studio head feels more authentic, both to her character's age and the mores of the era.

The cynicism I mentioned is manifested in the two-faced personalities who run rampant throughout The Last Tycoon. Nobody is who they seem to be. That has long been held out as a good thing in the public perception of Hollywood as a dream factory, where terminally ordinary-looking people can be made to look extraordinary on the big screen for two hours, thanks to talented writers, directors, cinematographers, costumers, make-up people, and on and on.

Yet watching that two-faced tendency unfold through the series' running time becomes a self-defeating proposition that is eventually wearisome. In real life, it's not realistic to believe all people can be trusted. In fiction like The Last Tycoon, that translates into an eventual inability to suspend disbelief; if everyone is looking out for their own selfish interests, who's looking out for the viewer?

In any event, the series looks beautiful and elegant and the game of guessing which characters are entirely fictional and which ones are not becomes a pleasant diversion.

The Last Tycoon is the 11th dramatic series to debut as an Amazon Original in the past two years, to go along with nine comedy series. The 20 shows represent a mixed, mostly enjoyable batch, as you'd expect, but I'd be hard-pressed to describe any of the ten that I've watched so far as essential. Enjoyable, yes; trending towards above-average, mostly; but essential? That would be stretching it.

Still, like Bosch, Goliath, Sneaky Pete, and Z: The Beginning of Everything, The Last Tycoon is handsomely mounted and admirably creative, even if it doesn't quite come together as a wholly successful endeavor.

The Last Tycoon is currently available to stream on Amazon.

Do you feel this content is inappropriate or infringes upon your rights? Click here to report it, or see our DMCA policy.
AmazonBilly RayF. Scott FitzgeraldKelsey GrammerLily CollinsMatt Bomer

More about The Last Tycoon