Review: THE GRACEFIELD INCIDENT, A Collection of Rehashed Material

Mathieu Ratthe wrote, directed, and stars in a film about a camera embedded into a prosthetic eye. 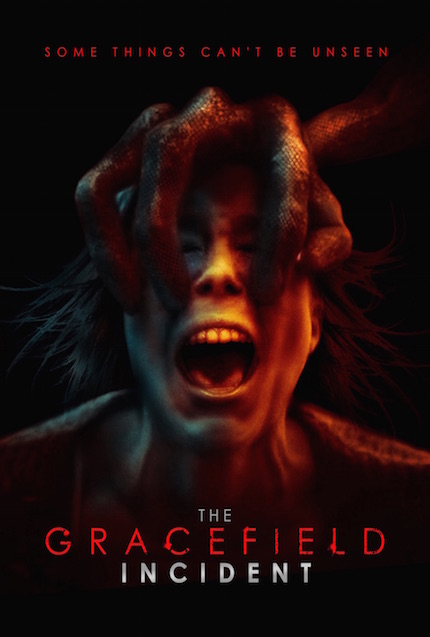 "Matthew Donovan (played by Mathieu Ratthe, who's also the film's director) embeds an iPhone camera into his prosthetic eye to secretly record a weekend with friends in a luxurious mountain top cabin”, says the official synopsis for the Canadian/American production The Gracefield Incident.

Prosthetic eye plus camera is a silly idea, no doubt, but it’s also one that makes you wonder what the hell you are about to experience. However, Ratthe’s low-budget hybrid soon enters into familiar territory, and even though a lot goes on eventually (marital drama, mystery, horror, sci-fi and so forth), nothing is completely engaging.

While the film opens with the genesis of said eye camera notion, and we think it’s going to be a first-person effort, soon it becomes obvious that its aesthetic is closer to that of the overused found footage subgenre. The protagonist’s obsession with recording pretty much every moment of his life comes together with Ratthe’s own interest in telling his story through different types of video cameras (from a handheld camcorder to a security cam); add to that the “cabin in the woods" setting and, indeed, you have ready a pile of rehashed material.

When the loud, annoying and irresponsible group of friends decide to have fun in the isolated cabin of the protagonist’s Bigfoot-obsessed boss, it’s way too easy to guess their immediate fate. On the contrary, it’s kind of hard to care for these persons once the weird shit starts happening in their surroundings. A meteorite and an unknown creature - maybe Bigfoot himself, maybe an alien - appear to make of the woods a mysterious, dangerous place. The unconvincing acting and dialog, not to mention the characters' not so clever decisions, reduces the impact and even provokes some unintentional hilarity

Back to the prosthetic eye with camera element. It actually becomes irrelevant to the narrative, as it was only the bridge to what could have been easily a straight found footage movie, but the other particular aspect of the main character’s background gains importance.

Donovan and his significant other are still recovering from losing their unborn baby in a car accident (a tragedy displayed in the opening sequence), and ultimately The Gracefield Incident tries to connect its sci-fi aspect with this, its most humane conflict. Parenting ends as the principal theme, but a last-minute turn of events, itself deserving the WTF, can't make us forget the repetitive and messy rest.

The film opens in select theaters and on VOD platforms on Friday, July 21.

Do you feel this content is inappropriate or infringes upon your rights? Click here to report it, or see our DMCA policy.
found footagehorrorJuliette GosselinLaurence DauphinaisMathieu RatthemysteryScifi

More about The Gracefield Incident