The film represents Jodorowsky in his indisputably fascinating, magical, mythical, and most accessible form. 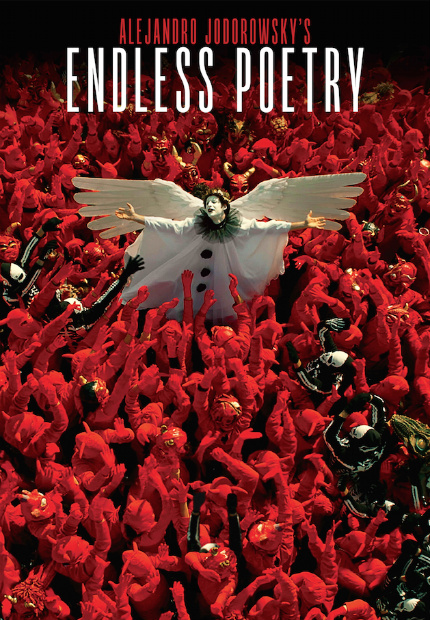 Chilean born Alejandro Jodorowsky can be called many things: Mystic, sage, tarot master, director, screenwriter, actor, mime, graphic novel scribe, healer, philosopher, novelist, playwright, spiritual guru. All that and more could fit on his resume... if he was a man who believed in such things.

In the cinematic world alone, it has come to pass in recent years that he is far more than just a footnote to midnight movies, he is a veritable avant-garde maestro. In 2013, "Jodo" returned to the occupation that gave him international recognition,

At the time he was 84-years old, and seemed to be just then in the prime of his creative career - as the writer, director and actor in The Dance of Reality (read the review). The highly personal project, based on the filmmaker's  semi-autobiography, reimages his childhood in Tocopilla, Chile, his difficult relationship with his father and his inclinations to poetry, though in Jodorowsky's philosophy, poetry envelopes a handful of seemingly diverse denotations.

The director now expands this effort  in his newest opus, Endless Poetry. For all intents and purposes, it is a direct continuation, a sequel if you will, to The Dance of Reality.

This continued cinematic retelling of Jodorowsky's childhood, and it's materialization, is a product of circumstance. The production got underway after the filmmaker reunited with his former producer Michel Seydoux, who backed The Dance of Reality without even seeing a single word.

The union of two friends separated by a disastrous film project in the 70s was prompted by director and producer Frank Pavich, who aimed to tell the behind-the-scenes story in Jodorowsky´s Dune (read the review). Pavich´s documentary heralded Jodorowsky´s rehabilitation on the silver screen, and most importantly, documented and augmented the process of myth-making at the end of which Alejandro Jodorowsky rose as the mythic filmmaker: a visionary way ahead of his time,  and as a prophet (as he famously declared in the spiritual acid western El Topo) whose unfinished film Dune was allegedly so revolutionary ("the greatest film never made"), it was doomed to fail.

Pavich single-handedly conjures the aura of a genius, and a misunderstood one at that. Take for example the case of the abandoned project Abel and Cain, rumored to star Marilyn Manson and Johnny Depp as the biblical brothers in a sequel to El Topo (first part of the sequel The Sons of El Topo was published recently as a graphic novel or in its creator´s words "film graphique" 46 years since the premiere of El Topo).

In 2016, Endless Poetry began its festival pilgrimage at Cannes, in the Director´s Fortnight section. Partially backed by Jodo enthusiasts via a crowdfund campaign, Endless Poetry picks up directly where the first film left off. The sequel is supposed to be the second entry in a supposed five-film-cycle -- a cinematic series of the expanding Jodoverse.

Being the mystic journeyman and creator that he is, Jodorowsky conceived of his own style of therapy, framed by aesthetics and philosophy, an odd crossover between psychotherapy and theater that he calls psychomagic. Designed to conjure up the language of dreams, psychomagic acts as a communicator to one´s subconsciousness in order to cure a wide inventory of ailments. The filmmaker wields the strange and ritualized technique as his personal form of civil surrealism or magical realism - the psychomagical realism.

Furthermore, psychomagic goes hand in hand with other Jodorowsky's other teachings, which he calls psycogenealogy (metagenealogy): mapping the impact on lineage on one´s life, a sort of deep psychoanalysis. The cult filmmaker performs a healing ritual on his own life and family and even though life is indeed understood backwards, Jodorowsky expands the notorious Soren Kierkegaard quote not only amending his life but, most importantly, crafting a fine piece of mythology out of it.

The arc of a father-son relationship from The Dance of Reality continues in Endless Poetry, as Alejandro becomes more and more defiant to his father´s (played by Jodo's oldest son Brontis) strict expectations, which eventually leads to him calling poets gays. The father´s primitive understanding of poetry (Jodorowsky does not hesitate to portray his father as a brute) forces young Alejandro, in one of many amusing scenes, to test his sexual orientation converting into Alejandrito´s surprising epiphany. 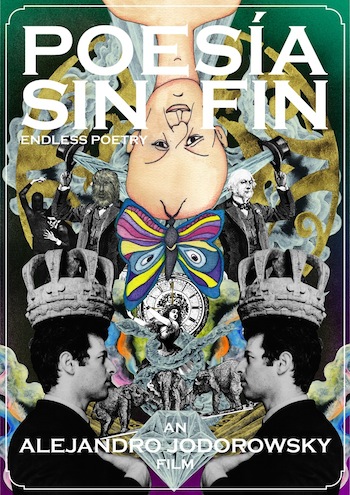 The Jodorowsky family moved to Santiago in the 1940s, where the now adult Alejandro (depicted by the director´s son Adan carving an artistic career in his own right) became engaged with local community artists.

After running away from home, he has been offered lodging inhabited by like-minded creative folk where he devotes hours to perfecting his art of puppetry.

Endless Poetry may be considered a spellbinding and nonconformist (to say the least) coming-of-age tale but more than that, the film becomes an ultimate testament to art and its healing powers. Jodorowsky makes art his absolute purpose in life by its daily invocation.

After Jodorowsky made acquaintances with the young poet Enrique Lihn, they decide in a spur of a moment for an act of poetry, a curious happening of walking only straight hilariously conquering various obstacles in their way (the filmmaker claims this anecdote to be true, although Jodorowsky´s lore encompasses episodes of disputable authenticity). The filmmaker considers poetry to be many things and most of them are put on the display in Endless Poetry.

One of them is a religious sketch in a series of ceremonies the filmmaker hosts in his bohemian den/temple. Furthermore, Jodorowsky reconstructs all encounters in a sort of ritualized way, recoding his autobiography into the language of dreams and psychomagic. Myriads of metaphors bear larger significance than their extravagant and eccentric face value suggests.

In a bar adorned by the tell-all decoration of phalluses and urinals, young Alejandro may have become a victim of a group sodomisation was it not for the power of the vagina that saves him. The rescuing vagina belongs to his muse and mistress, a vixen nicknamed Viper, who beds with Alejandro but furiously protects her hymen for the right one. She only walks with him grasping his genitals.

Chilean soprano Pamela Flores plays this bold and uncompromising woman, and it is surely not a coincidence that she stars in a double-role in Endless Poetry as Alejandro´s mother (as in The Dance of Reality). A cavalcade of symbolism inundates every frame no matter whether it is a line, action, event, plot or set design.

And thus, Endless Poetry can be accessed from numerous vantage points making the film fairly ubiquitous. As a mémoir, Jodorowsky despite immortalizing his pilgrimage through life, offers a historic insight into a community at a certain time and space mapping the political and social climate.

Moreover, it can be considered a product of peculiar full-throttle imagination. Or an alluring amalgam of both; partly mystification, partly confession, a creation of a higher degree of storytelling peaking into a myth.

Jodorowsky, as a true alchemist of words, turns the bleak family history of his ancestors coming from Ukraine and Lithuania into an odyssey (literally) climaxing in his conception in the book Where the Birds Sing Best. The filmmaker understands his life backwards and amends all the past ills and wrongs in the process of narration, not only for his sake but for the sake of his relatives, as is the case of a touching denouement between himself and his father in a ritual of absolution in the final scene of Endless Poetry. In Jodorowsky´s understanding, reality is subjective filtered and crystallized by imagination (the concept behind the term "dance of reality").

At the beginning of the film, Jodorowsky as a production designer uses theatrical devices to reconstruct the period of his growing up as azure 2D city cut-out, juicing out to the max the tight budget. He further overcome these odds with the impressive interior set designs, never compromising the depicted period, nor Jodorowsky´s vision. Thanks to legions of volunteers, he even managed to orchestrate a celebration of marching skeletons and devils in a Max Reinhardt-like scene in the scale.

The venerable director of photography Christopher Doyle captures the magical essence of Endless Poetry, although Jodorowsky seems to consciously stage scenes in a theatrical manner not solely only to resemble a ritual (psychomagic) but more as a part of his artistic D.N.A. counting back to the days of the Panic Theatre. There is a tiny fracture, a cluster of molecules, of Melodrama Sacramental rooted in each scene.

Given the filmmaker´s eccentricities, he paints his testicles red whenever hitting writer's block, a manneristic whim does not lack in the film - for instance, a Brechtian distancing effect is used in the form of stagehands dressed in black, lurking in and around the film set, handing props to actors or moving furniture out of their way.

However, Jodorowsky, as usual, operates outside the conventional norms in a wholly different system of perception. His aesthetic does not make a difference in the sacred or profane, worshiping or desecrating, the same way it does not separate fact from fiction. Those terms as shackles would just inhibit his creative process unbound by good or bad taste.

For Jodorowsky, everything is poetry. That´s why the scene of his younger self copulating with a menstruating lady dwarf, a girlfriend of his good friend, is above all a poetic act, not a transgressive act and never employed for shock value.

Quite the contrary, Endless Poetry is a celebration melding the humanistic and surreal, indeed free of any exploitative nature. Compared to previous his cinematic ventures, the only stylistic difference regarding The Dance of Reality and Endless Poetry, is that the director has shaved off the thick coat of esotericism from the previous film.

If The Dance of Reality marked the return of a visionary filmmaker, then Endless Poetry ups the ante. More sensual than the first cinematic chapter, Jodorowsky continues to amaze by poetical transmutation of an ingenious oral history into moving pictures. Several degrees tamer than El Topo or The Holy Mountain, Endless Poetry is nevertheless Jodorowsky in his indisputably fascinating, magical, mythical, and most accessible form.

Review originally published during the Locarno Film Festival in August 2016. The film opens at the Landmark Sunshine Cinema in New York and at the NuArt in Los Angeles on Friday, July 14, before opening in other U.S. cities.

Do you feel this content is inappropriate or infringes upon your rights? Click here to report it, or see our DMCA policy.
Adan JodorowskyAlejandro JodorowskyBrontis JodorowskyChileFranceLeandro TaubPamela FloresPoesia sin fin