The TOP KNOT DETECTIVE Delivers A New Trailer! And A Pack Of Smokes! 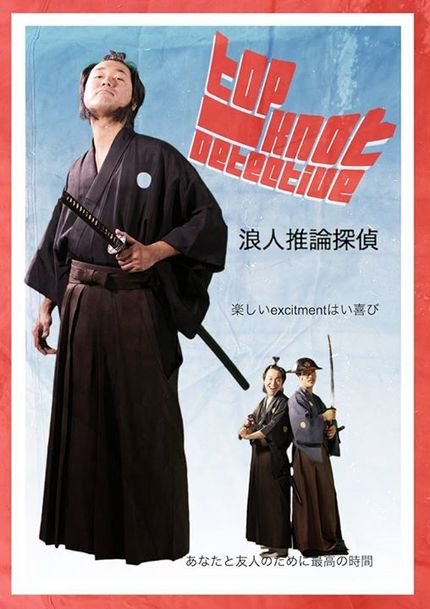 It was back in 2015 that we first wrote about the Top Knot Detective. Also known by the more literal title of Deductive Reasoning Ronin, Top Knot Detective was a cult Japanese television series explored in a documentary TV series by Aaron McCann and Dominic Pearce on Australian television. Or was it?

This ‘documentary’ unravels the tale of how ‘Ronin Suiri Tantai’ made it to Australian screens back in the late 90’s, retitled as Top Knot Detective, and what really happened behind the scenes of this outrageous show. The original Japanese series was legendary in its home country as being a cultural train-wreck, led by its insane writer/director/star, Takashi Takamoto.

The rivalry between Takashi and costar, Haruto Koike, is just the tip of this conspiratorial iceberg, leading back to Japanese conglomerate; Sutaffu, and its CEO, Moritaro (coincidentally, Haruto’s father). On-screen he battles robot ninjas & penis monsters; off-screen jealousy threatens to demolish his legacy.

Des Mangan (Herclues Returns) narrates the film and introduces us to the sensation of today’s cult fan world at Oz Comicon, then takes us right back to the origins of Takashi Takamoto, his hunger for fame, desire to be admired, and the blurry lines between truth and fiction.

Through interviews with cast and crew, we begin to unravel the mystery of Takashi, and get an insight into the eccentric shows that cult film fans hold so dear. Footage and found scenes from the original show are intercut with interviews, new discoveries come to light, and musings on the classic tropes of the genre, are pieced together to map Takashi’s rise and fall.

But that’s all fake. We made it all up.

Now cut together in feature film form, Top Knot Detective is rolling out on the festival circuit and bringing with it a new theatrcial trailer and vintage ad campaign. Because nothing goes better with deductive reasoning than cigarettes. Check 'em out below!