Review: HEADSHOT, Iko Uwais in a World of Fast Action and Brutal Violence 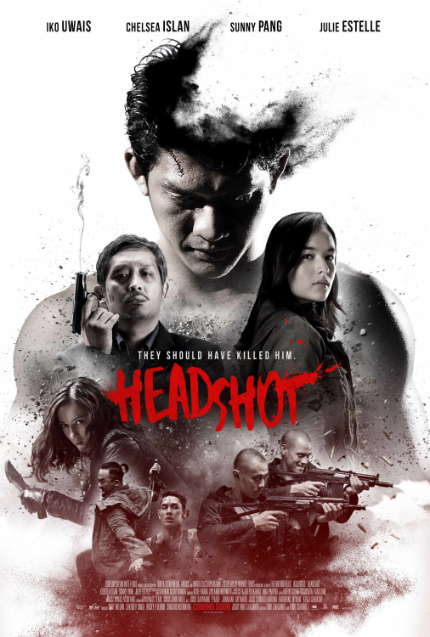 Off the coast of Indonesia, the body of man washes up on shore near a small village. As he lies comatose in a hospital a doctor from Jakarta, Ailin, looks after him. When he regains consciousness only fragments of his memory remain.
Ailin dubs him Ishmael for the time being, after the novel Moby Dick that she was reading when she waited at his bedside. A bond begins to grow between the two. Elsewhere, gang boss Lee escapes from prison and regains his criminal empire with a handful of incredibly deadly killers at his side. Word gets to him that a body washed ashore and it may be someone that he has been looking for.
In 2011 a little action film from Indonesia blew up the action cinema world and put its humble lead actor Iko Uwais on our radars from then until the end of time. After that came the equally successful and epic sequel three years later. Others from that small island nation have tried to stake a claim of their own but none have had the goods to attain the global reach that this series did.
So one can be forgiven if they head into a screening of Headshot with those films in mind, and with Iko at the lead again have set up their viewing easel and are ready to paint this new film with the same brush. It is just that the Mo Brothers have not done that. They have gone right ahead, grabbed your bucket of paint and smashed it against the canvas.
Here is what the Mo Brothers have done with Headshot. Take an early scene from that film in 2011 where the police had tied up a resident of the apartment block and he was sitting at a small table. Remember? And as the cops were looking out the windows and to the door of the apartment this guy reaches under the table and draws out a machete that was wired underneath. It is excruciatingly slow and the shot ends just as he swings that blade towards the neck of a unsuspecting cop. That moment.
That moment is where the Mo Brothers pick up from throughout their film. Not content to let our imaginations fill in the blanks, they spell it out for us. Violently. They will show you what that machete does when it meets the tender meat around your neck.  This is where their horror legacy pops in and screams hello. Loud, clear, and with very colorful language. Red to be exact.
If you are familiar with the work of the Mo Brothers (Killers, Macabre and ABCs of Death) you know that tonally it has been nasty stuff. Scenes in Headshot like the prison break that frees our master villain right off the hop, or the wholesale slaughter of innocents that will set our hero's quest a-rolling, may be difficult to watch. Maybe they even have you second guessing if what we are watching is an action film or perhaps it is a horror film after all. Hold up. Is this what we signed up for?
What these scenes achieve is this: These are the bad guys, and they are the baddest mutherfuckers in all of Indonesia.  What their role is in Ishmael’s life will be unveiled later on but for now their actions propel him through a world of fast action and brutal violence that at times will leave you white-knuckled and gasping for air.
I saw this on a friend’s status last night and asked for permission to share it with you because he perfectly summarizes what we were all thinking. And I agreed to do it like this…

"As a handsome and talented filmmaker friend said… ‘The Mo Bros film Headshot is half NC-17 Jackie Chan film and half Chang Cheh climax’”.

And he’s right. During the Q&A after a screening in Toronto, Timo talked about the influence that the Golden Age of Hong Kong cinema had on the story structure of Headshot and it fits. The old "Heroic Bloodshed" films from Woo and To. The Police Story series from Jackie Chan.
All were loaded to the brim with action and style but they also never forgot to include that melodrama that their fans back home adored. We do not necessarily have to buy into the budding romance between Ishmael and Ailin but it has to be at least believable for it serves as the motivator in Ishmael’s quest when she is kidnapped by Lee’s henchmen.
This story structure also brings out emotional performances from the leads Iko Uwais and Chelsea Islan. Uwais also has to broaden his range like he never has before. As a burgeoning action superstar he will not asked do much more beyond what the Mo Brothers have asked of him in Headshot but you get his frustration, his hurt and his emotions.
The emotional keystone to all of this is Ishmael's relationship with Julie Estelle's character Rika, Lee's right hand woman. By the time Ishmael has finally uncovered his past and his connection to Lee's gang, he also discovers Rika's role in all of this and that weighs heavy on him. The physical and emotional toil of Ishmael's journey will come to a head on a beach, facing off against the knife-wielding Rika. Ishmael has not choice but to go through her to get to Lee.
Estelle further cements herself as a femme fatale if not in international action cinema then at least within the Asian region. Now that Estelle no longer has pitch black sunglasses covering half her face, like she did in The Raid 2, the mythos of Hammer Girl took a hit, but Estelle proves herself more than capable of picking up Uwais' fight choreography
As far as Chang Cheh is concerned? Well, he may have been single-handedly responsible for depleting the Shaw Bros studios budget for fake blood during his time with them. His classic kung fu films were some of the most violent and bloody as he was influenced by directors such as Sam Peckinpah and Sergio Leone, none of whom were slouches when it came to violence.
The action in Headshot showcases Iko Uwais’ growth as an action choreographer.  There is no room for grace and grand gestures because what the Mo Brothers have planned for us is gruesome and horrific violence. Sugarcoating is the thing that probably got lost in translation on its way to Indonesia.
The climactic fight between Ishmael and Lee is the closest the film gets to showing that influence of early Shaw Bros films. Setting aside implements of destruction like guns and knives, the two combatants opt for their lethal limbs instead. It becomes the classic showdown between the hero and the villain that we deserve as an audience after enduring so much brutal violence until then.
The camera work changes up between static and dynamic, moving from the rig to handheld the moment the energy changes. For the most part the Mo Brothers and their crew do an amazing job of capturing the action, moving within its lethal circle, but still allowing us to see what is happening amidst the sparring. There are times where it did get too close, lost and tangled with the movement, but careful planning and execution by the directors flows with the action and largely does not get left behind.
When someone asks you what no holds barred action looks like, just point them in the direction of Headshot. Stand back and be prepared to pick up the pieces of their shattered souls.
Early on, Headshot is a test of moral fortitude, but as the story progresses, characters are established, and motivations are clearer, it settles on its bloody course of action and carries it out with bombastic aplomb. It reminds everyone that you do not turn you back on Indonesia when talking about international action hotspots.
They have machetes.
Review originally published in slightly different form during the Toronto International Film Festival in September 2016. The film will open in select U.S. theaters on Friday, March 3. Check local listings for more information.
2
Sign-In to Vote
Tweet 0 Submit

Do you feel this content is inappropriate or infringes upon your rights? Click here to report it, or see our DMCA policy.
Chelsea IslanHeadshotIko UwaisIndonesiaMo Brothers

Yes, it's also available on VOD.

There doesn't seem to be much of a marketing push for this, but I can certainly understand why. It would be great if Asian action movies like this could find bigger international audiences, but even The Raid 2 didn't do too well in N. American theatres, although The Protector/Tom Yum Goong grossed over $10 million once upon a time. That seems kind of crazy now.