Sundance 2017 Wrap: Tracking Down the Buzz from the Festival that Was 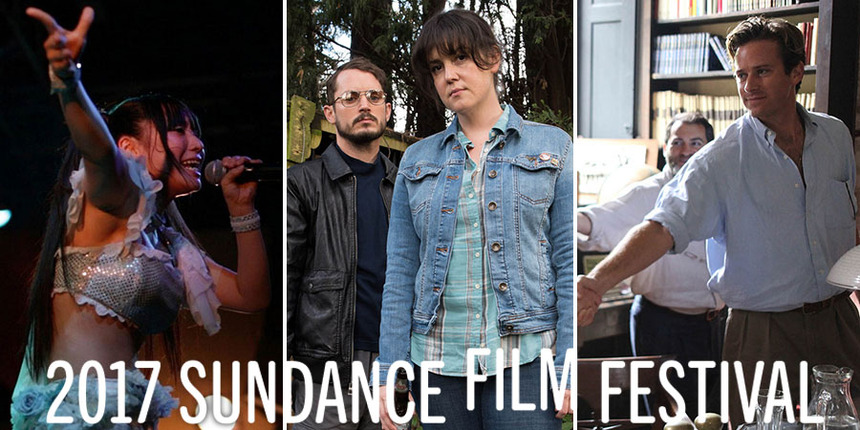 The extra snowy 2017 edition of the Sundance Film Festival has long since been buttoned up and our late-landing reviews and coverage have just about all been filed as well (jump to the bottom for the full list). As a way of wrapping things up here at ScreenAnarchy, we're going to take a quick look back at the films that had everyone talking between the snowy protests and the sweaty parties. These are the films we'll sure to be hearing about over the next year plus of theatrical and digital releases. Special thanks to the team on the ground of Jason Gorber, Zach Gayne, and Ben Umstead. 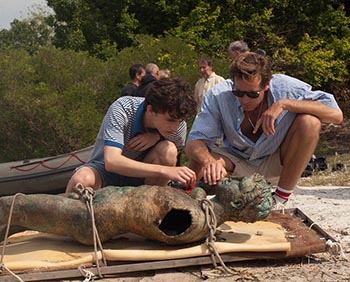 Perhaps the movie with the best overall buzz was Luca Guadagnino's Call Me By Your Name. In his review of the film, Jason called it a "Cannes-like fable" referring to its European-ness; an obvious break from the American indie world that dominates in Park City. I suppose that's no surprise as Guadagnino is Italian and his past two films A Bigger Splash and I Am Love were oh so Euro. It will be quite interesting to see what he does with his upcoming remake of Suspiria.

Jason's not wrong. There were certainly a lot of "American indie-feeling" American indies (it is Sundance after all). Zoe Lister-Jones's directorial debut (in which she also wrote, produced, starred, and performed music) is a very sweet example of that and features great comedic performances from Adam Pally and Fred Armisen aside her own. Waldo Salt Screenwriting Award recipient Matt Spicer's Ingrid Goes West (he received that award along with co-writer David Branson Smith) had a lot of deserved buzz as well as a big money sale to Neon (that's Tim League and Tom Quinn's new co., if you haven't heard). The film stars Aubrey Plaza as a lovably psychotic Instagram stalker of Elizabeth Olsen (sooo American). O'Shea Jackson and Jr. and Wyatt Russell both give great performances as well. 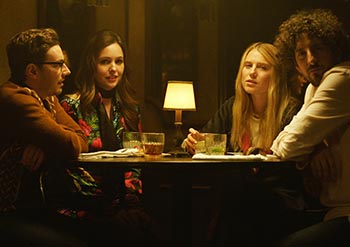 I'd be remiss not to mention the American indie that I produced at Sundance, L.A. Times, though it's always a bit tricky to talk objectively about that sort of thing. Luckily, I don't have to as Zach so kindly filed a review without any prodding from me where he said that Michelle Morgan's debut "rub(bed) me in the same satisfying way as the Whit Stillman trilogy, while managing to completely stand on its own." Thanks Zach.

Another LA-based movie in the Next section that had people talking was Janicza Bravo's Brett Gelman starring Lemon. Zach chatted with the couple about their oddball comedy, which he called a "scarily bleak, yet wickedly funny journey through mundane hell."

Switching coasts, one particular New York-set indie got a good amount of buzz. Ben chimed in to say of Person to Person: "I imagine director Dustin Guy Defa listened to a lot of old blues records and read plenty of Charles Schultz's Peanuts before filming. Indeed, there's a lovely 'sad-sack' feel to this multi-generational, multi-class, multi-narrative that is set across multiple neighborhoods in New York City. While known comedic talent like Abbi Jacobsen and Michael Cera shine as local newshounds, it's real-life vinyl enthusiast Bene Coopersmith and feminist author Tavi Gevinson that lead the film's existentialist heart with a warm and ready beat."

While it is certainly indie, Maggie Betts's Novitiate eschewed the sweet and silly tone so prevalent throughout the American indie slate for a more sinister and seductive feel in her feature narrative debut. Her gamble paid off, as this story of a nun grappling with un-convent-ional love in the 1960s won Betts the Breakthrough Director award. It is a prize well deserved as the Margaret Qualley and Melissa Leo starrer is truly something special.

If the term "indie" denotes produced without the help of a distributor, then Wilson might not technically qualify. While it has indie spirit in droves, this Woody Harrelson starring Daniel Clowes graphic novel adaptation was produced by Fox Searchlight. In his review, Zach writes, "The Skeleton Twins director, Craig Johnson, proves himself the man for the job of presenting Clowes' screenplay in pitch perfect doses that play out not unlike the pages of the book. As a result, Wilson, the movie, has about 60 delightfully crusty characters, most of whom have no time for Wilson's shit and go as quickly as they came." 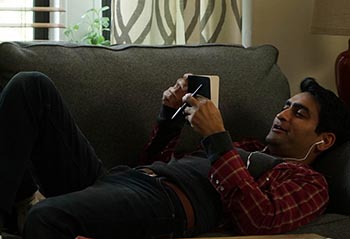 Zach also reviewed The Big Sick, a movie that made headlines for its first weekend bidding war and big money sale. Perhaps that's not to be unexpected from a movie produced by Judd Apatow, but Zach praised the Kumail Nanjiani-starring and Michael Showalter-helmed relationship comedy as "every bit as funny as we've known Nanjiani and Showalter to be," while also lauding its heart-warming nature.

Another of the most talked about premieres was Sicario and Hell or High Water writer Tyler Sheridan's directorial debut, Wind River. It's very clear from this tense Jeremy Renner-starring thriller that Sheridan is every bit the talent in the big chair that he has shown to be behind the keyboard. His style is refined and meticulous and belies a depth of knowledge far broader than that of a first-timer. He also had quite the pairing with DP Ben Richardson whose frozen tundra scenery had audiences reaching for their scarves and gloves, even in the well-heated Park City venues. 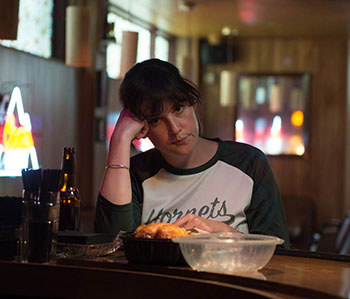 But the real winner of the narrative slate was the US Dramatic Grand Jury-winning I Don't Feel at Home in this World Anymore. Actor Macon Blair's debut feature deserves every bit of praise that comes with wining what amounts to Sundance's top prize. In his review, Jason called it, "a tonally rich, impeccably realized indie romp." He then went on with further praise by saying, "Pairing Sundance darling Melanie Lynskey with Elijah Wood, Blair's unique and slightly sordid tale is highly entertaining." This is indeed an excellent film and a whole lot of fun.

Blair's film would be at home in most festivals' midnight programs, even though that wasn't where the Sundance programmers chose to place it. Though it was the secret screening of Jordan Peele's Blumhouse-produced Get Out that had the most people talking, two other films that did get good buzz from the late late program were the all-female-helmed anthology XX and the Murnion/Milott Cooties follow-up Bushwick. Of the latter, Jason wrote, "Between the floating camera and the collision between the chaos and normalcy of borough life the film's unsettling nature is captivating." Of the former, I chimed in in my review that the film is a "very enjoyable and often scary anthology that shows a ton of promise from its directors." 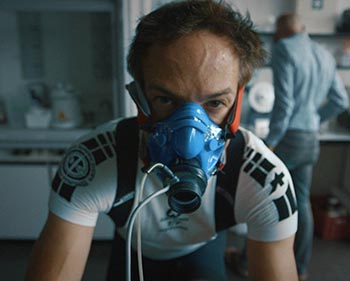 Sundance 2017 was packed with great documentaries as well. Things got off to a powerful start with the very strong opening night premiere of An Inconvenient Sequel. This check in with Al Gore and the dire state of our climate crisis 11-years on is exquisitely made both for its overall air or importance without leaving the audience feeling hopeless, and the captivating suspense narrative contained within. Had the film been eligible for awards, it would have likely taken something home, even if the jury had been forced to make up an award the way they created the "Orwell Award" for Bryan Fogel's truly excellent Icarus. This film tells the story of director/subject Fogel's experiments with performance enhancing drugs. It then takes a radical turn when the Russian doctor he's been interacting with suddenly finds himself in the midst of the biggest Olympic sports doping scandal ever. To say that Fogel had a front row seat to the dramatic story would be a terrible understatement. The film begs to be seen to be believed.

Hot button international issues were again a trend at the fest and three films dealt with them in equally intriguing but different ways. Joe Piscatella's Joshua: Teenager vs. Superpower took a journalistic look at the youth-led fight for democracy in Hong Kong through interviews and footage shot with one of its young charismatic leaders going back many years. The film won the World Docu Audience Prize. The Workers Cup, directed by Adam Sobel, tackled the issue of migrant workers living under harsh conditions in Qatar in anticipation of the 2022 World Cup. That film took a humanist approach, exploring the issue through a few of the workers taking part in a soccer tournament designed as one of the few distractions for the lonely migrants. Christina Clusiau and Shaul Schwarz's Trophy also held some surprises addressing the issue of big game trophy hunts in Africa from all angles and leaving the audience with a nuanced view of both the pros and the cons of the practice. 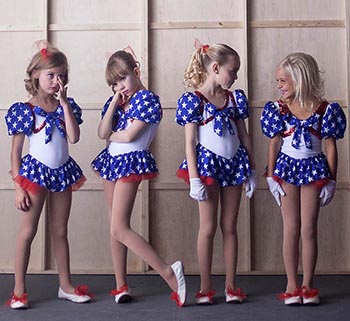 There were no shortage of strong docus dealing with US issues either. Nobody Speak: Hulk Hogan, Gawker and Trials of a Free Press was a worthy follow-up to Brian Knappenberger's excellent The Internet's Own Boy, meticulously recounting the sordid details of the miscarriage of justice that was the Peter Thiel-funded attack on our First Amendment rights. Anyone who can make Nick Denton a sympathetic figure is quite impressive. Also impressive was the Netflix doc Casting JonBenet. This fascinating and stylized film by Kitty Green is as much an examination of memory and human nature as the case itself.

Here's Ben on another notable US doc: "Directed by activists turned filmmakers Sabaah Folayan and Damon Davis, Whose Streets? is the kind of visceral, immediate, and righteous doc we need more of in ailing America. Though its form can be a bit unwieldy, swinging precariously from a slew of protest footage to underwhelming and rote 'talking heads,' such force does indeed play straight into the anger and unrest of the citizens of Ferguson, Missouri following the death of unarmed Michael Brown by police officer Darren Wilson." This plus the US Docu Directing prize-winning The Force made a fascinating double feature of law enforcement documentaries.

There were many other great docs at the fest. Zach put in a compelling bid for Amir Bar-Lev's Grateful Dead docu Long Strange Trip in his excellent interview with the team. I was also a particularly big fan of one of the smaller docus, Tokyo Idols that looked at the wild phenomenon of young pop star-esque girls in Japan and the creepy but actually rather wholesome middle aged men who make up their fanbases. Director Kiyoko Miyake crafted an excellent and engaging film, mostly through her insistence on telling stories on both side of the handshake line with compassion and humor.

It would be impossible to give credit to all the excellent films that premiered at this year's fest. This is just a taste of the some of the more notable ones. But rest assured, there will be plenty more coverage of these films as they make their way to other fests on the circuit as well as hopefully finding homes that allow them to make their way to theaters and digital platforms in the months to come. Here are all our Sundance 2017 reviews, interviews, and features.