Sundance 2017 Review: I DON'T FEEL AT HOME IN THIS WORLD ANYMORE, One Hell of a Ride 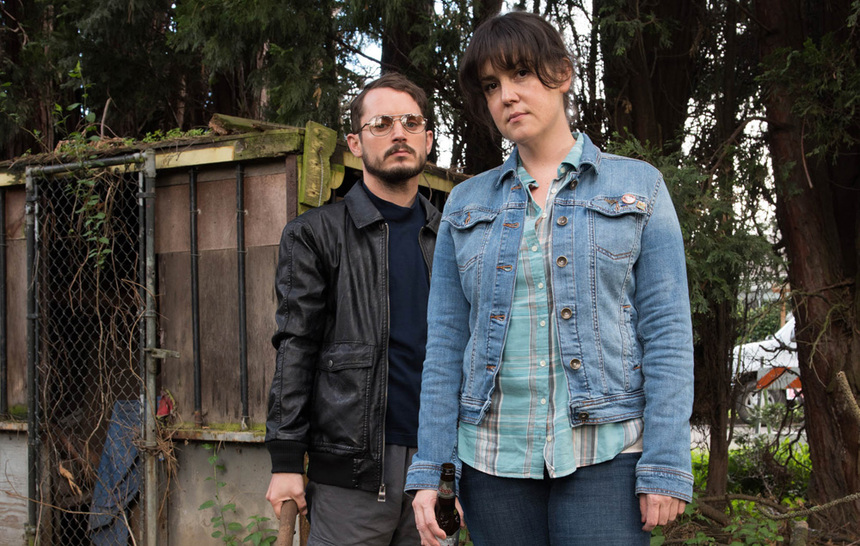 Most of us met Macon Blair onscreen as a the bearded, disheveled lead of Blue Ruin. Homeless and hapless, the character soon evolved into one of the more startling and indelible in indie cinema, a bravado performance that justifiably gained lots of notice.

Working again with director Jeremy Saulnier, Blair had perhaps the most thankless task in Green Room, literally moderating between the ice cold portrayal of Patrick Stewart and the more kinetic travails of the punk band at the center of the narrative. For me that role proved Blair’s mettle, injecting a sad sack humainity to the role of a middle-management Nazi struggling with his orders. It’s what sets the film apart, and while lacking in flash it’s more than made up for in its subtlety and effectiveness.

With his debut film I Don’t Feel At Home In This World Anymore Blair has taken these aspects of his gift behind the camera, crafting a tonally rich, impeccably realized indie romp. Pairing Sundance darling Melanie Lynskey with Elijah Wood, Blair’s unique and slightly sordid tale is highly entertaining.

The pairing of Wood and Lynskey is an inspired one – her morose and darkly humorous take fits perfectly with one of Elijah’s most extraordinary performances. His high-socked, bespectacled and ninjitsu-flavoured take is as odd as it is intoxicating, a far cry from some of his more notable Hollywood epics. Together they form almost a heroic bond, reminding of quirky buddy films like Ben Wheatley’s The Sightseers or even James Gunn’s Super.

Weeks after having screened it I still can’t get the title to stick in my head, even though I greatly appreciate the allusion it makes to early 20th century Gospel music. The film is surprisingly spiritual, in fact, not simply an excuse for mayhem but a tale with genuine ideas about our place in the universe, our reliance upon others for our own karmic enlightenment, and how death is inherently even more ridiculous than life, no matter how grizly the end.

The musical title is matched by a delightfully eclectic soundtrack, even crafting a subtle Green Room reference in the form of a track by the original Ain't Rights. As the soundtracks shifts so does the mood of the piece, always finding ways of drawing the viewer in without being overly manipulative.

Shot in and around the Pacific Northwest Blair’s film has a southern flair (think Coens’ Raising Arizona) with the broad, almost British surrealism exemplified by Portlandia. As characters make their way past large conifers and sip Big Red soda the mashup is a welcome one, the rainy dreariness a fine imitative harmony to much of the spirits of those showcased. From a dreary rowboat to a millionaire's haunt or junkyard dream, the production design belies the film's budget, apearing absolutely in keeping with the world that the narrative seeks to create

As the film effortlessly slips between comedy, drama and horror, Blair’s script provides pinpoint articulation of our place within the story. Yes, there are a few bits more than a bit cliché (here’s looking at you, speeding bus), yet I found myself continuously surprised on the directions the film chose to go.

I Don’t Feel At Home In This World, with its mix of ennui and enthusiastic energy, is a hell of a ride. As a first time helmer it’s all the more remarkable, as Blair’s work never succumbs to some major pitfals that seem to often crop up with films of this scope and tone. It’s a film that builds at its own pace, and like most things is best experienced early on in its run before some of the fun is ruined. Still, even for the most jaded of genre fans there’s plenty to admire here, and Blair and his team are to be commended for crafting this entertaining, exhilarating debut film.

Do you feel this content is inappropriate or infringes upon your rights? Click here to report it, or see our DMCA policy.
Elijah WoodMacon BlairMelanie Lynskeysundance 2017

More about I Don't Feel At Home In This World Anymore