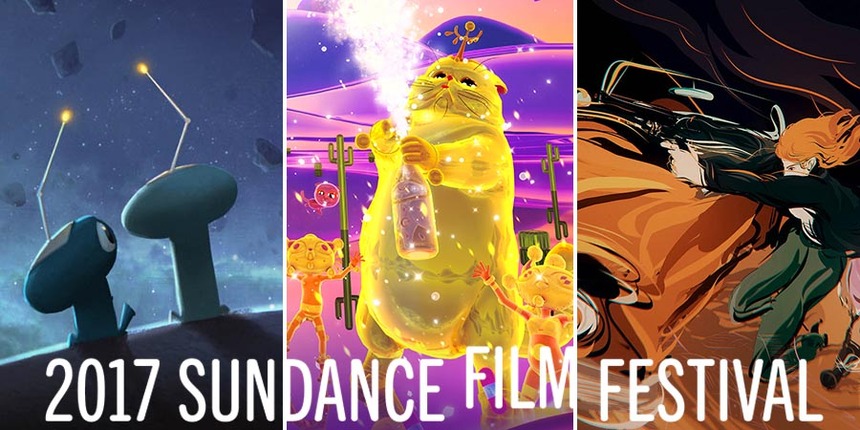 VR has changed enormously since we explored the offerings at Sundance 2016. The HTC Vive, Oculus Rift, and Sony Playstation VR are all out and Google has jumped in big time with its Cardboard-replacing Daydream. One can only guess at what announcements will be coming in 2017 (Apple, where are you?). Of course, content has also had a full year to develop and we've tracked some of these developments at Tribeca and at Fantastic Fest.

This year's New Frontier slate saw quite a bit of innovation, including a much larger set of spaces spread out across multiple locations in Park City. On its face, there seemed to be less focus on 360 storytelling than last year with more pieces for the PC powerhouse-requiring Vive and Rift. This may be as much to do with the challenges to storytelling in 360 as the ability to be innovative with interactivity on the PCs. Sundance has always focused on the artistic innovation of New Frontier and frankly, we just don't have the tools to be that innovative with our storytelling in 360 yet (jump to the end to see what Google is doing to combat that issue head on).

Regardless, there were plenty of artistic and innovative pieces on display at New Frontier. This year's program was undoubtedly a huge success. It was impossible to try everything, but here are a few quick words on what we were able to squeeze in. 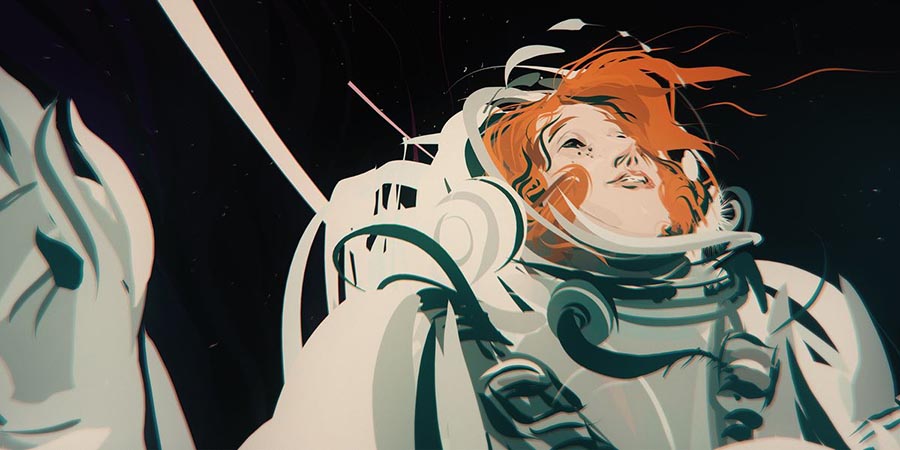 Dear Angelica
This fully narrative love letter is an absolutely beautiful piece to experience. It's directed by Saschka Unseld in collaboration with illustrator Wesley Allsbrook and the Oculus Story Studio. The result is an incredibly stylized form of 3D animation that was made using Oculus's Quill software (not dissimilar from Google Tilt Brush's style). But this is some advanced level animation and the 3D aspects are some of the coolest we've ever seen. The story is sweet and voice work by Geena Davis and Mae Whitman a nice touch. There is a lot going on all around you and at times you may feel anxious that you are looking in the wrong place. In fact, a note after you've finished lets you know you should go back and pause it to see everything there is to see. It will be well worth the time to explore this masterful piece further. 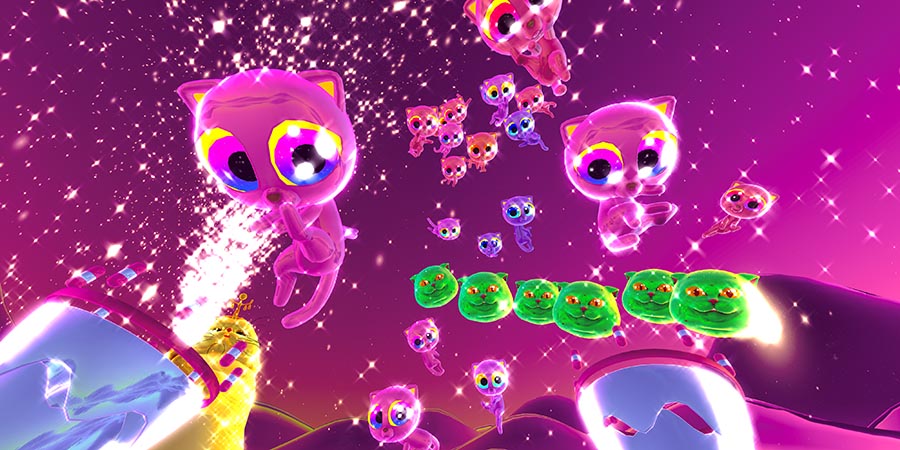 Chocolate
Probably the coolest music video ever created for VR, Tyler Hurd (of Gentle Manhands) has created this interactive world set to the song of the same name from the band Giraffage. In it you play some sort of God-like creature tasked with shooting cats out of your arms until the other Gods come and shower you with champagne. It's 100% as ridiculous as it sounds but the interactive elements made possible by the Vive/Rift controllers paired with the super lovable graphics make this piece a total blast. 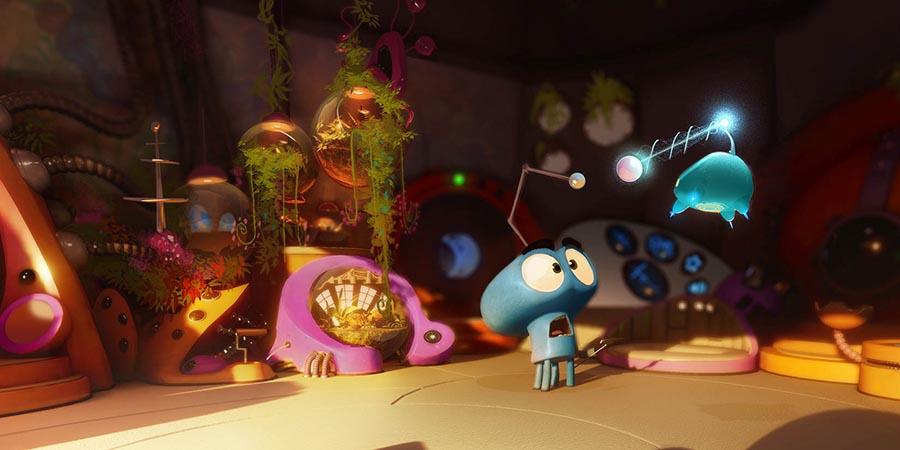 Asteroids!
The latest piece from Invasion! creator Eric Darnell of Baobab Studios again brings the lovable aliens to a fully immersive world. This time, instead of just observing, the user is thrust into the action with a semi-interactive element that has you pointing and clicking a bit to keep the narrative moving forward. This is, without a doubt, one of the highest quality animated experiences available in VR. 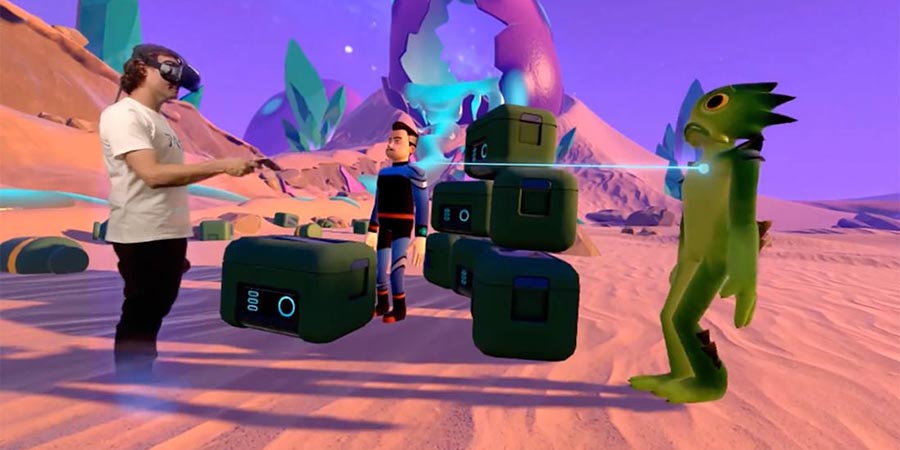 Mindshow
The brainchild of Visionary VR, it's hard to understate just how revolutionary Mindshow could be as a storytelling platform. This program puts you in the middle of your own little skit, and lets you interact with other characters. This will likely only make sense if you try it yourself, but rest assured, you've never done anything like this before. It's like you are creating your own interactive story in which you are both the writer and the star. You can then save and share your creations. The demo only scratches the surface of what is possible on the platform but expect big things when it launches in full. 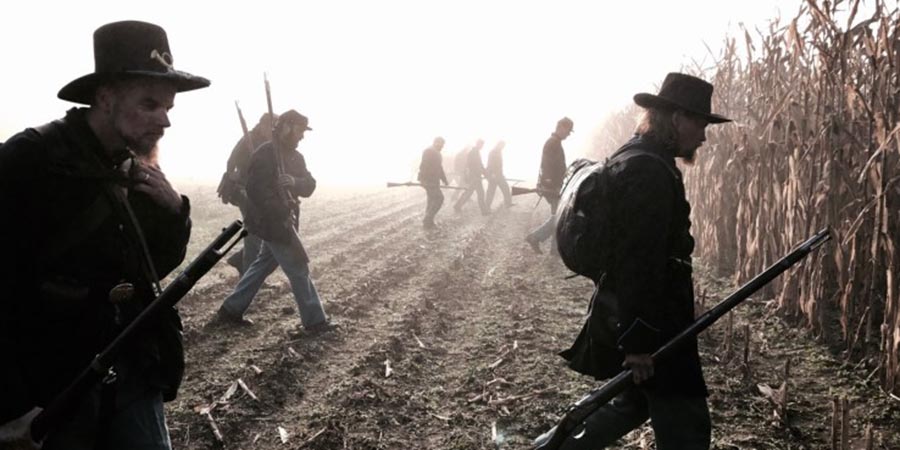 My Brother's Keeper
This PBS-produced Civil War piece included some very cool action sequences. It puts you right in the heart of a Civil War reenactment and the action is frenetic. It's particularly effective when the troops are sneaking through a creek, the tense air of an impending battle all around. The piece also employs some interesting 180 degree framing to keep the viewer focused. It's an interesting tactic but still experimental. 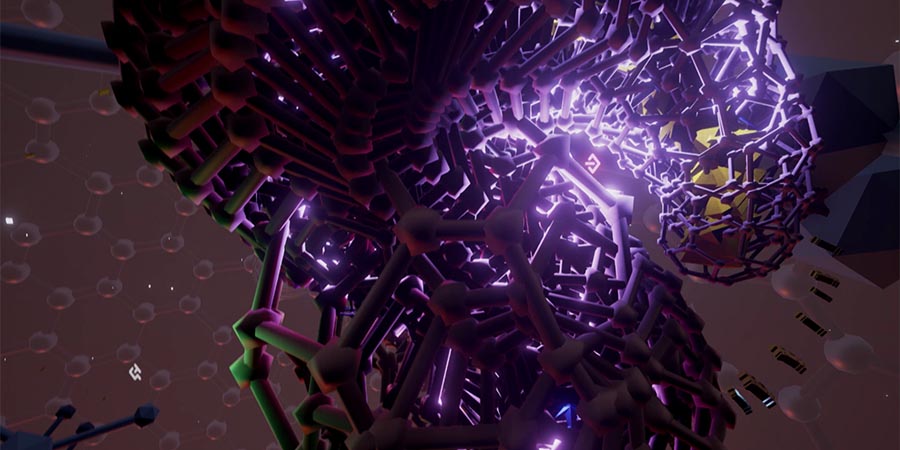 Microdose
Perhaps best described as Tilt Brush on acid, this piece by Vision Agency Inc. is a fully interactive non-narrative experience for the Vive that allows you to draw technology-inspired shapes in a trippy 3D world. The interface is much less defined than Tilt Brush and it's hard to know exactly what you're doing (there are worlds you can kind of warp around for different tools), but as an art project it's positively infectious. 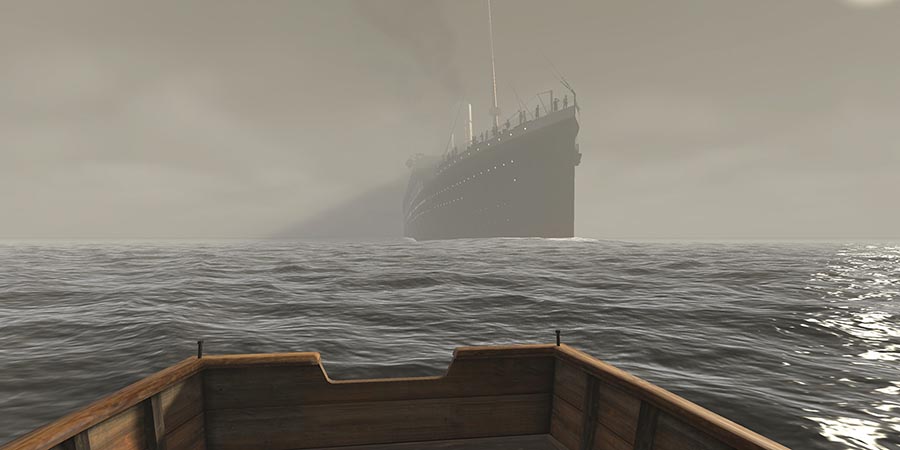 Titanic VR
Just as simple as it sounds, this very short animated experience by Immersive VR Education puts you in a rowboat as the Titanic cruises by on its way towards its eventual fate. It's perhaps a bit heavy handed with the docu elements but it's undeniably cool to feel the scale of the massive ship from well beneath. This is just a short teaser of the full experience to come which promises a more immersive experience. 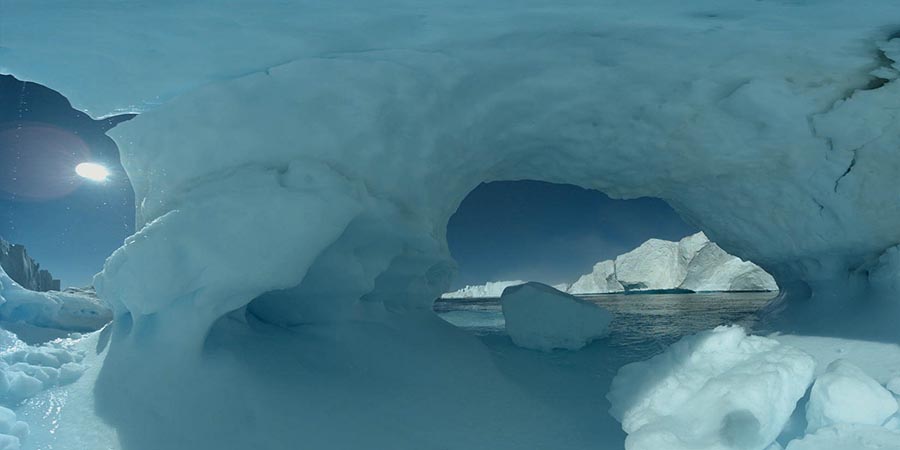 Melting Ice
This 360 docu piece by Condition One and Participant Media takes you inside one of the most compelling sequences from An Inconvenient Sequel where Al Gore tours a rapidly melting glacier in Greenland. The piece gives you a good sense of the scale of the glacier melt via static shots in various dramatic parts of the glacier and pretty cool ride on the bow of a boat. 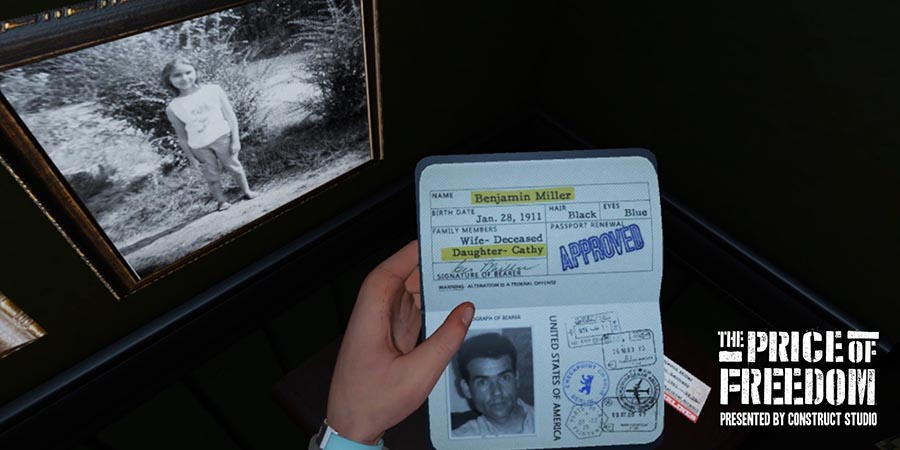 The Price of Freedom
This piece by Construct Studio is probably best described as a VR Escape Room. The puzzles aren't super hard but you do get a bit of a feeling of desperation as you pick up items and look for clues. This definitely falls on the game side of the narrative divide but it's an innovative form of storytelling nonetheless. 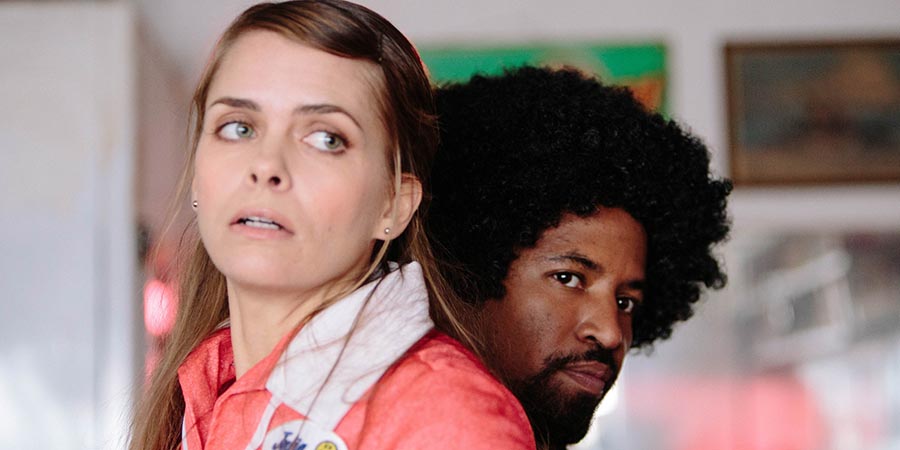 Through You
Saschka Unseld and Lily Baldwin's highly stylized 360 narrative piece is a trip through an entire lifetime of love. It features some very cool camera movements around our main dancers and some beautiful sets and costumes. 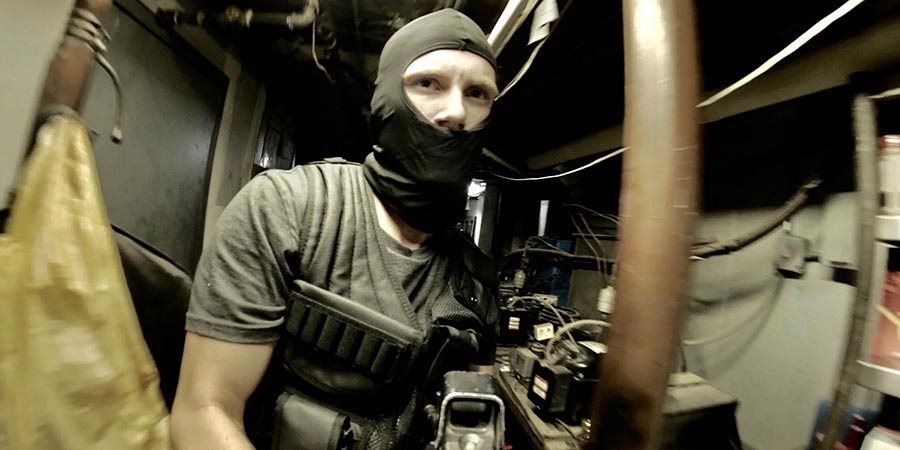 If Not Love
This fully narrative mostly omnipresent 360 video takes you inside a nightclub shooting and explores how the events that lead to the tragedy might have unfolded differently.

YouTube's stab at defining the grammar of VR
A few final words for what Google is doing between their Daydream and YouTube teams. There is a lot of talk in the VR narrative space about the tools we need to tell stories. Quite frankly we have yet to define the grammar of VR narratives. What replaces the shot-reverse shot or our current form of continuity editing? These methods came about from experimentation and, likewise, the grammar of VR storytelling with undoubtedly emerge in the same fashion. So one big question is, how do we fund this experimentation?

Google has come up with a pretty compelling answer to that question. By putting VR capture tools into the hands of their YouTube creators, Google is looking to get a whole ton of people capturing and posting 360-video to their YouTube channels. That's important because these creators are already receiving revenue from these channels, so they're motivated to bring more content to those already established marketplaces where dollars are earned via views.

Of course, a quick tour of the most successful YouTube channels doesn't exactly inspire a lot of comparisons to Georges Méliès or Sergei Eisenstein. Much of the YouTube VR content that has been generated by this initiative amounts to a tour of the YouTube creator's apartment. But it can't be denied that this is an innovative answer to a burning question of how to pay for experimentation and we are certainly hopeful for its outcome.