Review: THE GIRL WITH ALL THE GIFTS, A Heady Mix of Arthouse, Genre and Zombies 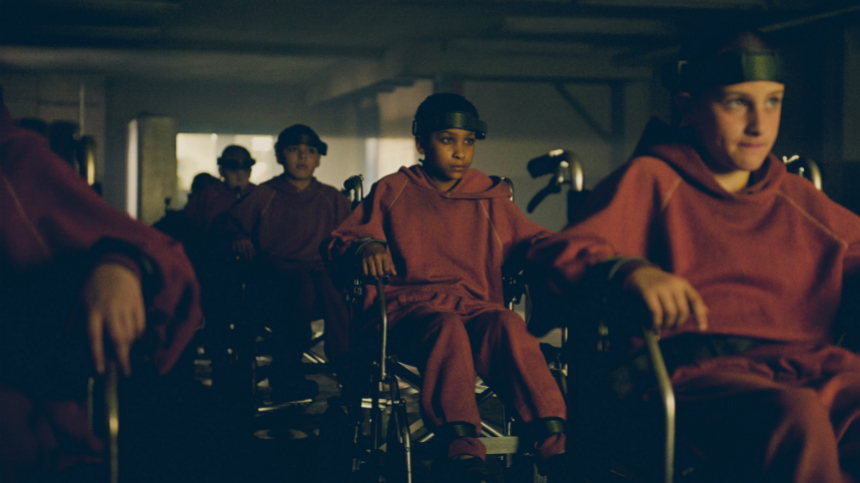 Opening with the eponymous girl locked in a cell and counting upwards to a thousand, The Girl With All The Gifts may as well be ticking off the sheer number of zombie films that a fan of the genre is 'forced' to contend with in these days of The Walking Dead.

In actuality, 12-year-old Melanie is being gathered for daily school lessons, dressed in prisoner's duds while strapped to a wheelchair along with her classmates in neat rows, all equally restrained. Halfheartedly walking through a memorization exercise, a teacher -- hint: not one of the good ones -- mutters under her breath, "Content is not really relevant, is it?"

This is a thesis that screenwriter Mike Carey (adapting his own novel) and director Colm McCarthy clearly want to shatter into a million pieces. For indeed, the zombie movie has new places to go and new ideas to explore. Consider The Girl With All The Gifts in stride with South Korea's Train To Busan, arguing that fast zombies, being all the rage, have evolved to the point where they are here to stay, where a good filmmaker can have his protagonist and eat him too.

While I have not had the pleasure of watching the second season of BBC's gangster drama Peaky Blinders nor the supernatural 2010 drama Outcast, it is very clear that McCarthy knows when to put something in the frame and when to leave it out. Rare is the movie in this genre that is not only patient in its world-building, but also handsome in its photography. 28 Weeks Later... springs to mind, and it shares a grace note or two with this film in the idea that social progress should be never be managed by the military.

In The Girl With All The Gifts, The UK and, by extension, the world, has been infected with a fungus that elevates hunger beyond consciousness (read: zombies). As in George A. Romero's Day of the Dead, there are military enclaves that have survived and are actively working the problem while fences keeps the hordes at bay. 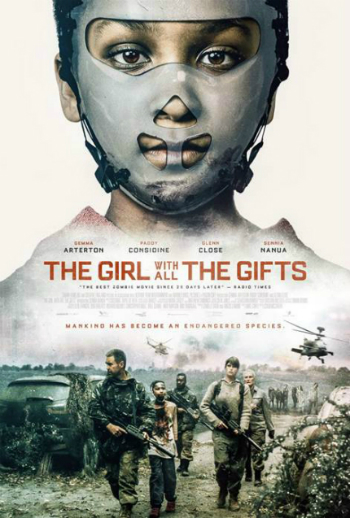 Dr. Caldwell (Glenn Close) seems very close to a solution with a small group of children born after the plague who exhibit tendencies of both the 'Hungries' (read: zombies) and normal children. Certain smells in certain circumstances set the children off, preceded by dry heaving and ending in chomping with lower jaw (think Keira Knightly in David Cronenberg's A Dangerous Method).

The eager and innocent Melanie is the best and brightest of all the children. Clearly she is Caldwell's Bub, only with kinder eyes and a keen vocabulary. Young Sennia Nanua is indeed the gift the movie gives to us. Her character represents our own better natures as human beings - being bright, confident and unfailingly considerate to others.

Melanie is the hope that any parent might have for their own offspring and Nanua realizes all of this seemingly effortlessly as perhaps the most capable child actor that I have seen in years. This is telling, because not only has child acting come a long way in the past few decades, but Nanua spends a sizable portion of the film wearing a transparent Hannibal Lecter mask covering her blood stained face. Talk about artistic constraint! I cannot wait to see this girl grow up and star in, hopefully, dozens of films; the talent here is staggering.

While Dr. Caldwell wishes to harness Melanie's innards for vaccine development, her more sympathetic teacher (Gemma Arterton) feels chopping up the children is not the answer here. Circumstances come to an inevitable head in the compound, forcing the child, her two competing 'mothers' and a male soldier (Paddy Considine, always great) on a desperate road trip into the infected wilderness.

The intersection in The Girl With All The Gifts of superb character work, with talented actors all around engaging in committed performances, combines with a plethora of interesting ideas in a very tight package. This feels like the film version of I Am Legend that filmmakers have struggled with at least three times and all failed in somewhat interesting ways. (The best of which, The Last Man On Earth, starred Vincent Price struggling with a very tiny European budget).

Subtly blended together with Michael Haneke's Time of the Wolf (with which Girl shares a key image) and Alfonso Cuaron's Children of Men, you have that heady mix of arthouse and genre which is rare, due to the difficulty of calibrating both sensibilities into a satisfying package; one of far less head-shot horror and far more thinking-woman's speculative fiction. I am keen to read Mike Carey's novel to hunt for Matheson-isms.

Name dropping the mysterious boxes of both Schrödinger and Pandora, the film walks the divide between modern science and classic mythology. But addressing, head-on, the stewardship of Mother Earth for the next generation in the midst of divided ideologies, puts the film into a space that is nothing if not ambitious.

If it asks one to occasionally suspend credulity in the more pragmatic 'rules' and details of how the Hungries (including Melanie) can smell or not smell, something I could never get a handle on over the course of the film, then so be it. McCarthy has a knack for 'the bomb not going off'' style of filmmaking, and the half-a-dozen setpieces are superb.

But it is the evolution of Melanie's precocious innocence towards self-aware adulthood in the crucible of a terrifying and changing world that is the engine that drives the film. And it hums.

Review originally published during the Toronto International Film Festival in September 2016. The film opens in select U.S. theaters on Friday, February 24 and will also be available to watch via various Video On Demand platforms.