Now on Blu-ray: THE GIRL WITH ALL THE GIFTS is a Fresh Take on the Undead 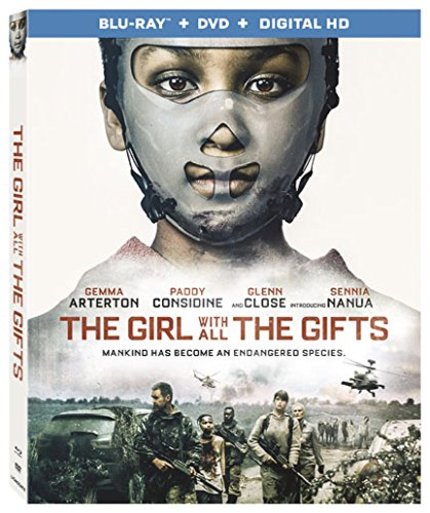 Director Colm McCarthy's The Girl With All the Gifts is one of the best zombie films ever made, and this Blu-ray release from Lionsgate is a solid treatment for this relatively low-budget marvel.

The zombie film has become one of the most maligned subgenres of horror ever since a glut of not-very-good ones rushed to theaters in the mid '00s following the success of Danny Boyle's 28 Days Later on a nothing budget. I've been a fan of these types of films for a couple of decades, and even I was close to saying, "enough is enough", but every year or so a film arrives that takes a fresh look at the material and decides that it can do something special.

In 2016 and 2017, film fans have been lucky enough to get a few such wonders. Last year it was South Korea's undead-on-a-train actionfest, Train to Busan. That film combined the zombie apocalypse as viewed by the lackluster World War Z and reimagined it as a siege film with a twist and a surprising amount of heart. However, the winner for me over this last year is definitely The Girl With All the Gifts, as it takes a more academic look at the concept of zombies as a metaphor for the dealth of the humanity within.

Twelve-year-old Melanie is a "hungry", a human infected with a fungal infection that takes over the brain and turns its hosts into eating machines whenever a whiff of live flesh passes their nostrils. Melanie is special, though. While the world has largely succumbed to this plague, Melanie is among the few small children who is largely able to control her urges and therefore remains seemingly more human than the voracious beasts that stalk the living.

When the military research facility in which she is housed as part of an experiment hoping to synthesize a cure is overrun by the mindless hungries, Melanie and a team of survivors are forced to flee and hope to find safety and a cure for the world, all while our pre-adolescent heroine tries to maintain her humanity while the rest of the world tries to take it from her.

Our Kurt Halfyard reviewed the film out of its Toronto International Film Festival North American premiere and had this to say:

The intersection in The Girl With All The Gifts of superb character work, with talented actors all around engaging in committed performances, combines with a plethora of interesting ideas in a very tight package. This feels like the film version of I Am Legend that filmmakers have struggled with at least three times and all failed in somewhat interesting ways. (The best of which, The Last Man On Earth, starred Vincent Price struggling with a very tiny European budget).

Subtly blended together with Michael Haneke's Time of the Wolf (with which Girl shares a key image) and Alfonso Cuaron's Children of Men, you have that heady mix of arthouse and genre which is rare, due to the difficulty of calibrating both sensibilities into a satisfying package; one of far less head-shot horror and far more thinking-woman's speculative fiction. I am keen to read Mike Carey's novel to hunt for Matheson-isms.

I agree with Kurt that this film is the rare successful blend of arthouse and the kind of horror that satisfies on a more visceral level. While there is plenty of acion to be found, it is the characters' and the film's humanity that really drives it. The Girl With All the Gifts is one that will definitely end up on my end-of-year top ten, and you owe it to yourself to check it out.

Lionsgate's Blu-ray disc of The Girl With All the Gifts looks and sound as spectacular as you would expect. The film had a rather modest budget, but the team behind it did wonders with their project, squeezing every last time of production value out of everything they had. The film looks fantastic, but I would like to give special attention to a superb DTS-HD MA 5.1 audio track that really immerses the viewer in the film through smart use of the surround channels. It isn't a flashy audio presentation, but what the sound designer did with the quiet moments in the film is wonderful.

In terms of extras, the film is supported by a solid featurette called "Unwrap the Secrets of The Girl WIth All the Gifts". This featurette goes a bit beyond your everyday EPK in discussing not only the production of the film, but also a lot of the psychology of the script and features extensive interviews with the director, writer, actors, and even the composer in an effort to give a holistic view of a dedicated team that made this magic happen. If I had my 'druthers, I could've watched another hour of detailed behind-the-scenes footage, but I know that on a film like this we couldn't really as for more than this solid featurette, and I'm happy. I do wish they'd added an audio commentary, but maybe at some point in this future when the film is a bona fide classic we'll get all of that. For now, consider this a definite recommendation!