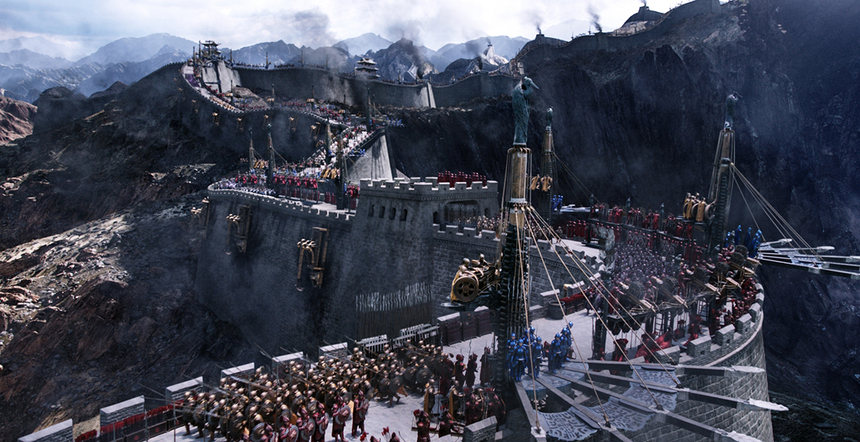 I've seen sillier attempts at blockbuster fantasy films than Zhang Yimou's latest, The Great Wall, but I must admit it's been a while. The director, one of China's most respected visual artists after his stunning work on crossover hit wu xia films like House of Flying Daggers and Hero, is no stranger to over-the-top stylization.

In fact, Zhang's direction of the Beijing Olympics' opening and closing ceremonies drew quite a bit of attention back in 2008. However, this time around, he uses his powers in a more questionable manner, in the service of a story that puts a European mercenary portrayed by Matt Damon in the center of an existential battle against ravenous monsters along the titular Great Wall.

Damon plays William, a mercenary/trader who is trudging across the vast desert of western China in search of the mysterious, and perhaps mythical, black powder that turns air into fire. Along for the ride is a fellow mercenary named Tovar, played by Pedro Pascal (Narcos). We meet the pair in the middle of being chased by local tribesman; why we do not know, however, the chase does succeed narratively in pushing these two men directly into the Great Wall of China, where they are greeted by a deluge of artistically arranged arrows and an inquisition.

On the road to the Wall, William and Tovar encountered a strange beast in the dark that William managed to kill through a few lucky swipes of his sword. He brought along the severed paw of his foe in the hopes that somewhere down the line he'd be able to learn what exactly it is he killed. The inhabitants of the wall, a massive army of color coded battalions led by generals in silly helmets, know exactly what it is, and they are not too happy.

Gigantic green bulldog dinosaur dragon monsters from space. Or something like that. The film tries to explain it but doesn't do the greatest job. Whatever they are, they really hate that wall and all the soldiers on it. The story says that every 60 years the beasts emerge from the depths to try to take over the world and all that stands between them and the extinction of the human race this time around is Matt goddamned Damon.

This is where the narrative gets sticky, and all of the pre-release chatter starts to make a lot more sense.

When word was first trickling out about The Great Wall several months ago, an incredulous group of film buffs seemed to all have the same question: What the hell is Matt Damon doing in medieval China? Even though it was clear that, historically, Western traders have been moving back and forth between Europe and China since at least the 14th century, the idea that Matt Damon was headlining a Chinese film made by one of that country's biggest directors and co-starring some of China's biggest stars, made some people a little uncomfortable.

Let me spare you some of the details and get to the core of that question: He's saving the world.  Spoiler? Maybe, but you'd have to be pretty dense to think it could end any other way. William's skills as a mercenary and an archer of considerable skill lead the army to protect humanity from a fate worse than death. If you can get with that idea. If it doesn't stick in your craw that Matt Damon is the only gigantic face on the poster in a film that features Andy Lau, one of the biggest stars in Asia, you might still be able to have fun with The Great Wall.

I'm not going to lie, I had a pretty good time with this when I wasn't rolling my eyes so far back in my head that I could see my own brain. Let no one say that Zhang doesn't know his way around a camera, the film looks gorgeous, and carries the absurdly vivid kind of color palette fans should recognize immediately from films like House of Flying Daggers. Make no mistake, The Great Wall is art directed within an inch of its life, with stunning color and costume coordination to go along with some very fun 3D gags that make solid use of the format.

The action sequences, and there are plenty of them, offer plenty to keep the eyes distracted from the fact that somehow Matt Damon is going to manage what centuries of trained-from-birth Chinese soldiers couldn't over the space of ninety minutes or so. The beasts are fun to look at, occasionally frightening, and definitely built for the kind of speed the modern blockbuster demands.

I'm not a huge fan of some of the creature designs, like the xenomorphs from Aliens; there are different strata of these monsters, and some are far more appealing than others, but the main beasts taking part in 90% of the action are pretty solid. If you don't think too much about what's actually going on, it's pretty damned fun.

On the other hand, if things like plot, story, dialogue, tone, and logic are your cup of tea, you might want to think twice about checking this one out. I generally scoff at the inevitable postmortems of blockbuster films that live to pick apart every plot hole, but with The Great Wall, it doesn't take a genius or OCD personality to realize that there are a lot of questions without answers.

Motivations change from one scene to the next, decades of loyalty are suddenly rendered moot in the service of getting to the next action sequence, and the tone moves from jaunty and jokey to life and death drama in the blink of an eye. I tried really hard to connect the dots, but after a while you can tell that the writers were not terribly interested in world-building, more in getting to the next dinosaur/dog/dragon monster fight. I can't really argue with that, especially considering how fun some of those fights are, but it still is a bit of a head-scratcher.

Has Zhang made better films? Of course he has, but it feels to me like in this case he was absolutely giddy over the opportunities afforded to him by the scale of this project. The result is this surprisingly ambitious siege movie that it's hard not to enjoy at least a little bit. The Great Wall is absolute nonsense from beginning to end, no doubt about it, but it's fun nonsense, so that should count for something, shouldn't it?

Do you feel this content is inappropriate or infringes upon your rights? Click here to report it, or see our DMCA policy.
andy lauchinamatt damonwillem dafoezhang yimou

More about The Great Wall