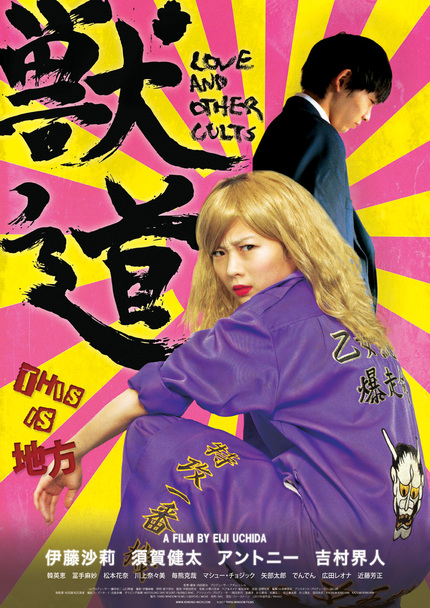 Japanese director Uchida Eiji is on a hot streak as of late. Two of his latest features, the Amelie-meets-revenge thriller Greatful Dead, and the self-reflexive look at the indie film scene in Japan Lowlife Love have brought the relatively unknown filmmaker out of the shadows of Japanese indepedent cinema and onto the world stage thanks for exposure from the UK's Third Window Films.

Third Window's Adam Torel first got behind Uchida with a home video release of Greatful Dead back in early 2015. Later that year he put the company's money where its mouth is and produced Lowlife Love. That partnership continues with the latest collaboration between Uchida and Torel, Love & Other Cults. We have a first look at the film's new trailer and key art, and it looks like it's going to be a lot of fun.

Check out some more details on Love & Other Cults in the press release below:

Born in a small town in Japan, a young girl named Ai is sent to a cult commune by her religious maniac mother and lives there for seven long years. After the cult is exposed by the police, Ai starts a new stage of life, going to a normal school for the first time, but can’t fit in. Ai drops out from school & society, spending her life living with a delinquent family full of gangsters & call girls. In a strange twist of fate she finds herself back in a new and normal life, living with a middle-class family, but her troubled life continues to follow her into more deep and seedy paths. The only person who understands Ai and her troubles is another cast off from society, Ryota, who is in love with her. Ryota lives in a shady world of delinquents, though wants to escape and live a normal life. The two teens’ purity gets swallowed up by the urban jungle in a big regional city. A black comedy depicting lives of modern youth and their struggles in a place where there is no way out.