Camera Japan 2017 Review: LOVE AND OTHER CULTS Minds The Details

It's fair to say that ever since his Greatful Dead was released, we've been fans of director Uchida Eiji. That film presented a decidedly offbeat look at Japanese society, and Uchida showed he wasn't afraid to use pitch-black comedy and make his characters dive deep into some VERY dark areas. The same thing can be seen in his newest film Love and Other Cults, which shows a cast of misfits travelling through life, using roads placed on the iffy underbelly of society.

Loosely based on a true story, Love and Other Cults follows Ai, a girl who is neglected by her religious mother to the point of abuse, and finally dumped into a weird love-cult. Growing up in the cult for seven years, Ai is adored and worshipped by everyone, and life is good. But when the cult is disbanded after its leaders are arrested, Ai is woefully unprepared for living in the "real" world. As a teenager, she quickly ends up in a life of drug use, prostitution, foster homes, street gangs, and yakuza, only finding a personal foothold for herself when she becomes a porn star, adored and worshipped once more. 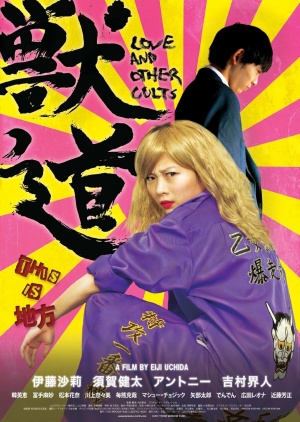 Having grown up outside of Japan himself, Uchida Eiji generally has an outsider's view on Japanese society. It's easy to see why this story appealed to him, and once more it allows him to show Japan through the eyes of some very colorful people indeed.

In the movie, the story is told by Ryota, a boy in love with Ai ever since he met her in school. A rebel himself, Ryota enters a street gang, embracing a life as a career criminal until he discovers that to be just as much "a hell" as regular work. Over the years he recounts the times he met Ai, and how their lives were at that moment. Uchida plays loose with this approach though, as you also get to see Ai's times living within the foster homes, even when Ryota wasn't anywhere near.

Playing loose does allow Uchida to focus a lot on the side characters, and a good thing that is too as they often provide the best material in the film. I'd like to single out comedian Antony, who impresses as gang leader Kenta. Being black and heavy-set, Kenta starts of as a kind-of walking special effect, with all people just scared to death of him. But he soon starts on an interesting character arc of his own, and despite being a first-time actor Antony rises to the role as needed.

It's not all great though: it sometimes feels like bits and pieces of side story are missing. You never quite get the handle on several characters and this hurts the film. Take Ryota, who is an almost-lead even: we do see why Ai acts like she does, but his background remains remarkably vague, and we never understand why he's such a rebel. It's like Uchida focuses so much on specific details that it becomes hard to keep track of an overall storyline. And at times the film feels quite exploitational, especially when it concerns the abuse of women, since the aftermath sometimes gets short thrift.

All in all, Love and Other Cults is hard to define. The terms "black comedy" and "drama" don't quite cut it, though there is plenty of both in it. In this it is quite like Uchida's earlier film Lowlife Love. Both films are interesting but do require an appetite for a certain weird flavor. Maybe Uchida Eiji is building his very own niche-genre?