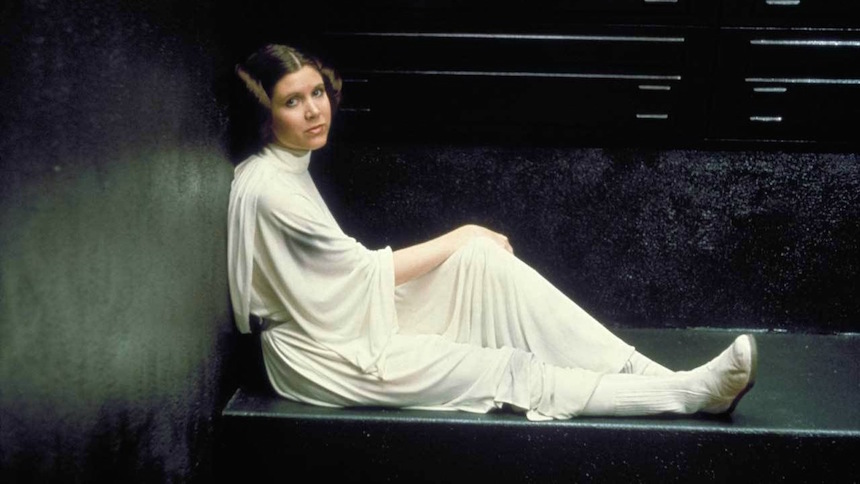 Two weeks ago, Disney took the unprecedented step of announcing that, in spite of their recent resurrection of Peter Cushing for CGI Frankentarkin in Rogue One and in the wake of the tragic passing of Carrie Fisher, that they would not be digitally animating a General Leia for the forthcoming Star Wars: Episode IX. (Fisher has, as has been widely reported, completed her work on Episode VIII: The Last Jedi.)

Disney's press release might have been needlessly preemptive, but it was understandable. Critical reaction to Frankentarkin was "mixed," at best - both in the believability of the effect (perfect in stillframe; less so in motion; and almost a total failure as an actual performance, IMHO), and in the creepy morals of the idea in the first place.

No, the tech ain't there; and maybe the tech will never be there. I suspect it will require better than a stand-in sound-alike to rule the performance of any future Frankentarkins, because if there was one thing missing from the CGI work in Rogue One, it was "presence." Actors have that; computers, less so.

The creepy morals aspect, on the other hand, is just something we're going to have to reckon with as moviegoers. Hollywood doesn't give up a new toy, and there's something natural - if eerily on-the-nose - about this decade's nostalgia boom being further bolstered by the ability to conjure up near-photorealistic duplicates of the people, places and things that populated the movies being remade.

Now, of course, losing Carrie Fisher is a much larger wound to many of us than any of its consequences to the future of any set of latter-day sequels - even if some of those sequels happen to be what are ostensibly the most popular movies of all time.

But let's think out the matter at hand regardless, because it genuinely represents a no-win scenario. Here are the only ways the future Star Wars movies could reasonably go down, as far as I can tell:

Option A): Rewrite Episode IX to move Leia offscreen altogether. This would, I suspect, represent a major change. While we know next to nothing about Leia's role in Episodes VIII or IX, it's reasonable to assume that as Luke's sister and Ben's mother, she has huge story points to conclude in the next two movies. Removing Leia from Episode IX almost certainly means extensive story changes. As both a creative person and a deep Star Wars fan, I want them to be able to tell the story they set out to tell, though that now seems highly unlikely.

Option B): Re-edit Episode VIII to parcel out some of Leia's scenes to Episode IX. I don't see how this solves the story gap problem mentioned above, but it might allow for some materials to be written around Leia's scenes in the two films, which allow Fisher to deliver her performance in two parts with additional context, satisfying the narrative requirements in a somewhat more streamlined way. That seems far-fetched to me, but hey, I ain't running Lucasfilm for a reason.

Option C): Send in ILM. Disney seems to have taken this option off the table, at least for now. (It's not impossible that the press release was merely intended to get the spotlight off the issue.)

C) and D) are essentially the same option in my mind, in that they pass the creation of Fisher's performance onto other hands: one with an admittedly ghastly, resurrect-the-dead sheen to it, and the other with a sort of equally grim, let's-all-move-on requirement alongside it.

Neither completely satisfy because neither (in fact, none of these options, from A to D) allow Fisher herself to give a farewell performance of her signature role, as Harrison Ford did last year with The Force Awakens.

That's the wound this Star Wars trilogy will have to bear; Fisher's death will be part of any reading of these films from here forward. In any scenario, we will be confronting the ugly reality of Fisher's premature passing as unavoidable subtext (and, depending on what happens to Leia, very likely text) of her role in the remaining films in this trilogy.

And pretty much no matter how Lucasfilm chooses to respond to it, the outcome sucks: the queasy-making potential of carrying on the role without Fisher in some fashion, or the creative disruption of changing the films and their stories to suit the offscreen reality.

Now for a little spitballing:

I've presumed from the outset that one of the lesser objectives of this Star Wars trilogy would be to conclude the roles of the older cast in a manner that will allow the Star Wars mega-franchise itself to continue without them. What this means is, I expected that these three films would either wrap up, or push to the background, characters whose performances are intrinsically linked with the people who play them: so, Luke, Han, Leia, and Threepio.

(And maybe Lando? I dunno, do they even bother to bring him back, only to tie him up?)

The Force Awakens did a gangbusters job of setting up a new cadre of leads, who can carry the rest of this trilogy and potentially another one after this; and Artoo and Chewie are ageless, and can appear indefinitely. Without knowing anything about the specifics of the remaining two films, I assumed Luke would be removed from the game board in The Last Jedi (the title might, or might not, serve as confirmation), leaving Leia to anchor the final film, before retiring as well. (Threepio probably just gets lost in a corridor at some point.)

This doubles down on the creative impasse Colin Trevorrow and Kathleen Kennedy may be facing. At this point, it somewhat depends on who Daisy Ridley's Rey turns out to be related to (if anyone): someone has to stand up for the Skywalker family when it comes time to deal with Kylo Ren.

If Luke and Leia are both gone by the time Episode IX rolls around, and Rey isn't Ben's long-lost sister/cousin/something else, the generational handoff is going to lose a lot of its resonance. Unless the resonance is simply that: the Skywalkers failed. A new Jedi must rise. In today's world, the idea of forefathers utterly failing the generation that must now pick up the pieces isn't the worst idea I've ever heard.

For me, though, the sting of losing Leia, if not Fisher's passing itself, was greatly clarified for me by this piece by fellow Toronto writer Anne Theriault, who waxed poetic about the value that Fisher's small but powerful role in The Force Awakens itself actually is. Fisher (and Leia) will remain iconic to a generation (or two, or three) of fans for playing Princess Leia, but it's General Leia who represents a true evolution of character in a way that, say, Old Man Solo does not.

And it's General Leia that we are losing, no matter what. Movies can be rewritten and actors can even be brought back to life via computers, but there is a piece of that character, that story, that we are never going to see, and will hear about only in fragments on commentary tracks five or ten years down the line. A myth itself, Star Wars has also had its own share of lateral myths surrounding its creation, about how things ended up being the way they are, and how they might elsewise have been. General Leia is now one of them. It isn't enough.

Do you feel this content is inappropriate or infringes upon your rights? Click here to report it, or see our DMCA policy.
Carrie FisherRian JohnsonStar WarsStar Wars Episode VIIIThe Last Jedi