Now on Blu-ray: STAR WARS: THE LAST JEDI Is Worth Another Look On Blu-ray 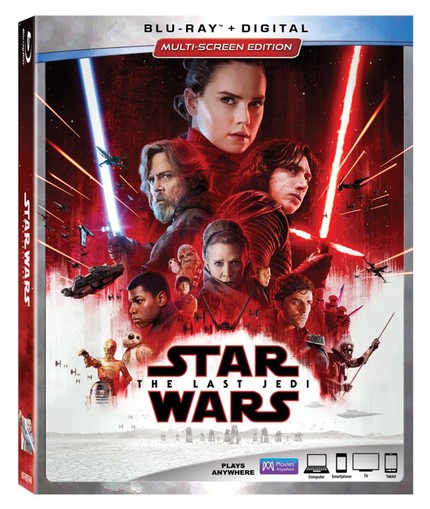 Just in case you weren't paying attention, last December LucasFilm and Disney released a new installment in the Star Wars series, the Rian Johnson (Brick, Looper) directed Star Wars Episode VIII: The Last Jedi. For the first time in a long time, under Johnson's direction, the series took a lot of pretty radical risks in terms of tone, character development, and story. To be honest, I quite enjoyed it.

I was never a Star Wars obsessive. Apart from owning a hoard of action figures and watching the films on VHS when I was a kid, I never really gave them or their place in the cultural pantheon much thought until the 2015 rebirth of the series with J.J. Abrams’ The Force Awakens. After the unavoidable marketing bombardment leading up to that film I had pretty much sworn the series off, as Morrissey once said, "I was bored before [it] even began". However, as the father of an 11-year-old son with a far higher tolerance than my own, I relented and found that I actually enjoyed the film more than I thought I would.

That's not to say that the film reinvigorated a passion for Star Wars that I'd lost, I was never more than a casual fan in the first place, but it did give me confidence that an entertaining film could still be made from these elements, even if they recycled a lot.

When Johnson was tapped to direct this latest adventure, I was pretty excited because I've been a fan of his since I first saw Brick and I was curious how he'd change the series approach to the material. He didn't disappoint, turning characters we thought we knew into something completely new and attempting to expand the universe a bit beyond its previous boundaries. Not everyone agreed with this approach, with some fans going to far as to protest the film's inclusion in Star Wars canon - a move that couldn't possibly be more juvenile if it was written in crayon - but, if I'm honest, I'm far more interested in a film that spurs discussion than one that inspires drool.

Our Jim Tudor reviewed the film upon its release and had this to say:

Over and over again, in instances great and small, we are shown that characters might not be who we expect, want, hope, or need for them to be. And again, like The Empire Strikes Back, it suggests that tyranny is something that must be continually survived as opposed to triumphed over. Yet, for the seriousness of its themes, and the potentially crushing consequences of seeing them through in some instances, The Last Jedi maintains the energy, fun and charisma that people hope for in this series. It’s a movie of subverted expectations and odd reassurances, with as many surprises as any film this year.

I have nothing critical to say about the audio/visual presentation of the film. The movie cost a bajillion dollars to make, so of course it looks and sounds perfect.

In terms of supplemental material, if there's one thing that Star Wars has no shortage of, it's people who want to talk about Star Wars. This release takes advantage of that in spades. The main feature disc houses an informative and engaging audio commentary with Johnson that will definitely help fill in some of the narrative and thematic gaps for fans looking for insight.

A separate Blu-ray disc houses several hours of bonus features and featurettes. The primary draw of this disc is the feature length documentary The Director & the Jedi that focuses on Johnson's journey from day one of pre-production through to the release. The doc effectively captures the enormity of the project and the way in which Johnson navigates this project that is so many times larger than anything he'd done before. It also addresses many of the issues that had some fans flummoxed or outright enraged by talking with Mark Hamill who famously didn't completely agree with the direction his Luke Skywalker took for this latest outing. A great documentary, well worth checking out.

The rest of the bonus material is more typically fluffy EPK stuff like deleted scenes, a 10 minute discussion of the force with Johnson, and a pretty cool pre-CG performance by Andy Serkis as Snoke that shows what a tremendous performance he really is, even under all those pixels.

This is a fantastic package, and well worth giving the film another shot if you weren't completely sold the first time around.