Review: GOLD Is Not Entirely Worth Its Weight 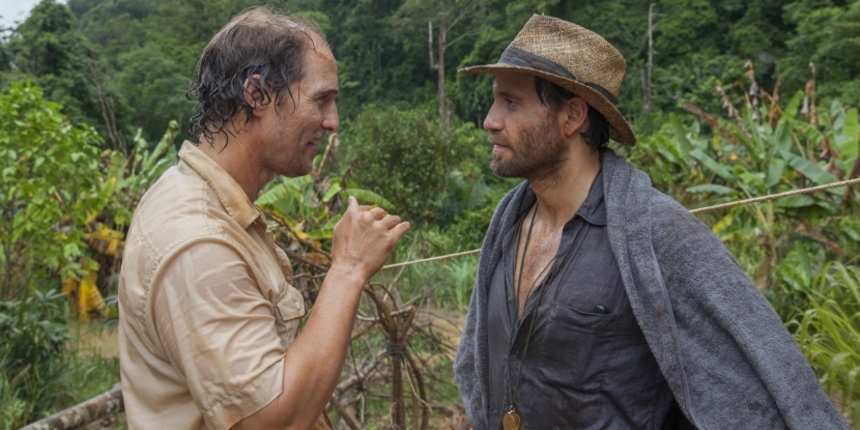 Are you old enough to recall Bre-X? If not, Stephen Gaghan's Gold is a fanciful, fictional retelling of a story about Wall Street greed and hubris that is happy to take the cautionary tale and gild it with Hollywood glitz. Investment bankers taking wild speculative gambles, the roller coaster of unsupervised capitalism; one might ask incredulously, what could possibly go wrong?

In the vein of The Wolf of Wall Street and The Big Short, Gold charts the progress of a mining company that hits the largest gold strike in the 20th century, deep in the jungles of Indonesia. More so, it is an opportunity for Matthew McConaughey to play an oily and charismatic slob, Kenny Wells, complete with snaggle-tooth, bald pate and pot belly.

We see Wells, early on in the picture, crudely romancing his girlfriend Kay (Bryce Dallas Howard), unrecognizable with a late 1980s perm and a push-up bra, a la Erin Brockovich, presenting her with expensive baubles and cheap (but earnest) philosophy in his father's office. He takes the meeting with his dad (Craig T. Nelson) who offers the moral of the film and the modern prospecting business: "I don't have to do this, I get to do this."

Some years later, the younger American prospector-dreamer has brought his father's company to a pretty low point. In a Hail Mary pass, he liquidates his meager assets to team up with sexy geologist Michael Acosta (Edgar Ramírez) on a jungle prospecting adventure.

Watching Ramírez unconsciously (effortlessly) channel Oliver Reed up against the backdrop of Robert Elswit's superb 35mm cinematography -- albeit, Thailand dubiously subbing in for Indonesia -- trumps the Wall Street shenanigans of the film. The bromance is more compelling than the business at hand, but the film doubles down on the conference rooms and Waldorf ballrooms that occupy vast swathes of its two-hour running time.

The local peasantry have been panning the Busang River in Borneo for thousands of years, but it is Wells and Acosta that come in with a modern engineering approach and take a plethora of core-samples in the nearby mountains. When the results indicate that the region contains rich deposits of gold, the madness truly begins. Word in the financial district that the Wells' company is, quite literally, sitting on a gold mine, prompts everyone from billionaire bankers (such as Bruce Greenwood, stealing his all-too-brief scenes) to Indonesian dictators to the mainstream media to want a piece of the action.

Wells lets his ego and his natural showmanship fan the flames before, well, you might expect that things go a bit off the rails. Wells' mantra vacillates between the whimsical, 'a bird without feet sleeps on the wind' and the far more pragmatic, 'you land where you are stuck.'

He fights with on-again, off-again Kay, who is fine with being assistant manager at a furniture store, while Kenny rides the rollercoaster. The mythology of the 'big American vision' takes a pounding, but we all learn something, a canard favoured by M. Night, Mamet, and of gamblers everywhere:  'The last card you turn over is the only one that matters.'

If that sounds too good to be true, it probably is.

Do you feel this content is inappropriate or infringes upon your rights? Click here to report it, or see our DMCA policy.
Bryce Dallas HowardEdgar RamirezMatthew McConaugheyStephen GaghanToby Kebbell