Vestron Video to Unlock THE GATE on Collector's Edition Blu-ray 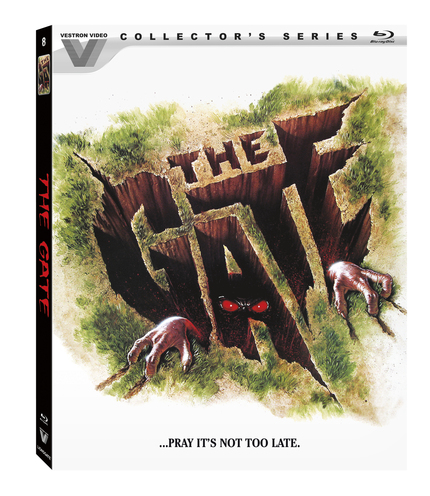 The Vestron Video Collector's Series Blu-ray line goes from strength to strength with their newly announced Blu-ray debut of Tibor Takacs' The Gate! Check out the details and trailer below for this '80s horror favorite, due to be unlocked on February 28.

The Vestron Video Collector’s Series unleashes unspeakable horrors when The Gate arrives for the first time on limited-edition Blu-ray™ on February 28 from Lionsgate. When two suburban kids accidentally open a portal filled with pint-sized demons hell-bent on taking over the planet, it’s up to them to seal the gateway and save mankind! The Gate features all-new, never-before-seen featurettes and audio commentary. A must-have for all classic horror fans, The Gate limited-edition Vestron Video Collector’s Series Blu-ray will be available for the suggested retail price of $39.97.

When best friends Glen and Terry stumble across a mysterious crystalline rock in Glen’s backyard, they quickly dig up the newly sodden lawn searching for more precious stones. Instead, they unearth The Gate — an underground chamber of terrifying demonic evil. The teenagers soon understand what evil they’ve released as they are overcome with an assortment of horrific experiences. With fiendish followers invading suburbia, it’s now up to the kids to discover the secret that can lock The Gate forever . . . if it’s not too late.

o   “From Hell: The Creatures & Demons of The Gate”

This brand new edition looks like the definitive home video release for one of the most desired '80s horror classics out there. I can't wait!