Now on Blu-ray: PARENTS and THE LAIR OF THE WHITE WORM From Vestron Video

Lionsgate Home Video's new specialty imprint, Vestron Video Collector's Series, is back with another pair of '80s video store classics. Bob Balaban's Parents, a pitch black satirical look at utopian surburban life, and Ken Russell's The Lair of the White Worm both land on Blu-ray for the first time ever. Check out the details below 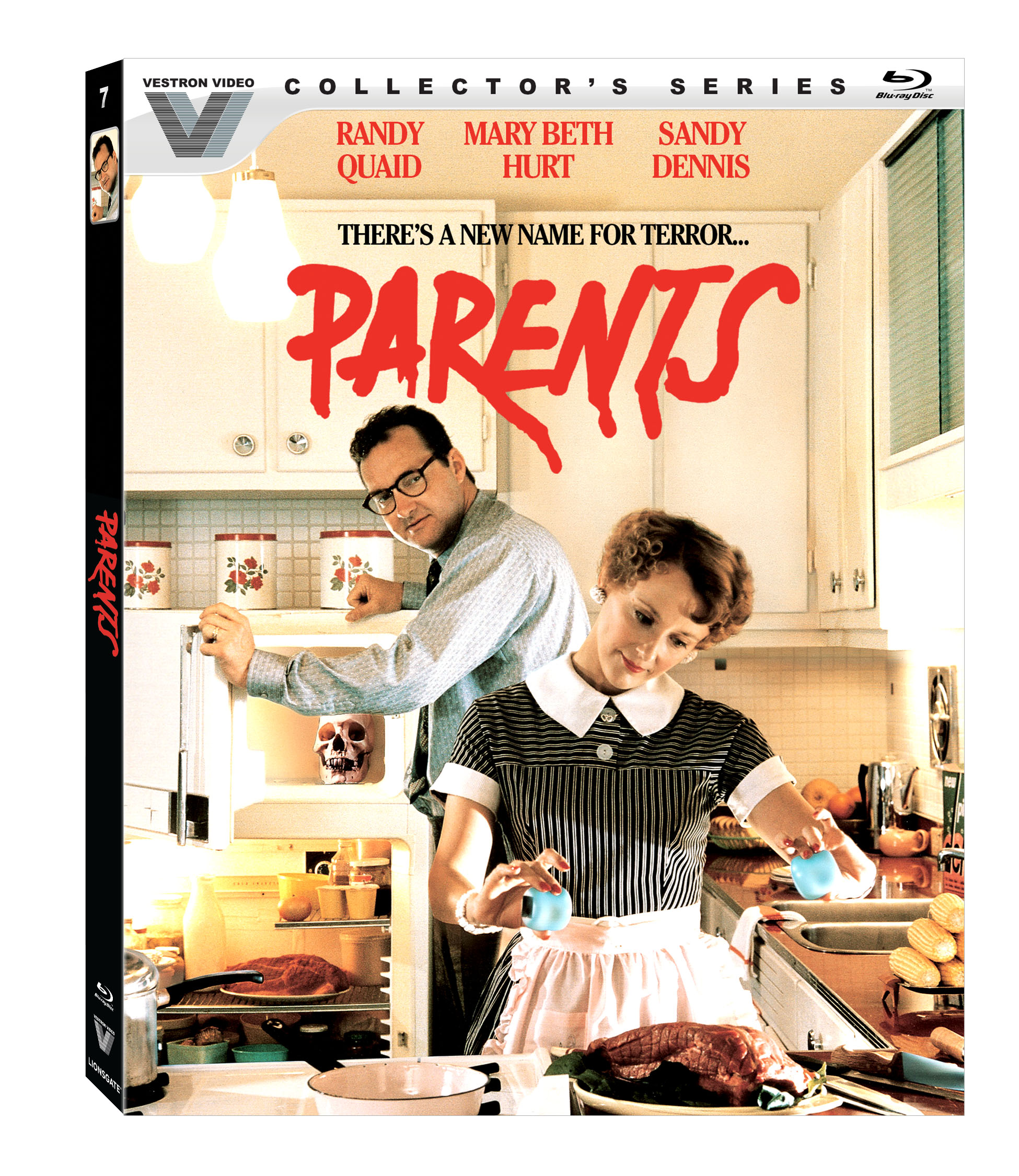 Bob Balaban has one of those faces you can't help but remember. I encountered him dozens of times in films before I knew his name, but it wasn't until he teamed up with Christopher Guest in projects like Waiting for Guffman and A Mighty Wind that he really blew my mind. This meek looking, mild-mannered actor was an absolute font of improvisational talent. It wasn't until years later that I discovered that he had directed one of my favorite VHS rentals of the '80s, the suburban cannibal satire Parents.

Parents stars Randy Quaid and Mary Beth Hurt as a perfect suburban pair. Quaid working his day job to bring home the bacon and Hurt keeping the house cleaned and the family fed. However, their son Michael is a not quite convinced that everything is as it seems, and as he begins to investigate he becomes more and more convinced that his parents aren't as perfect as they look.

Every night for dinner, Mom serves up a lovely plate of leftovers, but no one seems to remember what they were before apart from “leftovers-to-be”, the murky origins of his dinners begins to weigh on Michael. The timid little boy becomes emboldened to find out what exactly is going on, and before long, finds himself in trouble. When a school counselor comes over for a home visit, all hell breaks loose, and Michael is in the middle of it.

This film, made in the late '80s, is a satirical attack on the Reagan-era regression to 1950's social and moral codes. Quaid and Hurt make for the perfect “perfect” couple, but it's really Quaid who steals the show. Randy Quaid may have gone off the rails crazy over the last few years, but there was a time when he was a pretty decent little actor. In Parents he probably gets to flex his muscles a bit more than usual and it's definitely a wonderfully chilling performance on his part. Hurt is also quite good as the barely holding it together housewife who is just trying to make sure that everything looks perfect, even when deep down she knows it very much isn't. The child actor who plays Michael, Bryan Madorsky, is a barely there waif who sleepwalks through the film but somehow makes it work.

Never quite as explicit as I expected it to be, Parents nonetheless made my favorites list as a young man cruising the video rental shops. This film is all about the atmosphere, rather than abject terror of conventional horror. The combination of the '50s suburban design and Quaid's quiet menace make this a film well worth revisiting. Definitely a recommendation from me.

Parents resurfaces on home video after ages on an out of print DVD in this brand new remastered Blu-ray from Vestron Video. The new digital restoration looks good to me, with the '50s aesthetic being the most obvious beneficiary. The audio is also quite good, though this was a time before everything had 5.1 surround tracks. The DTS-HD MA Stereo track delivers clean dialogue and effects.

Vestron has loaded the disc down with great extras and I loved every minute of them. First up is an audio commentary with Balaban, who calmly relates anecdotes alongside producer Bonnie Palef in a satisfying, if a bit docile, track. Unfortunately that's the extent of Balaban's involvement in the extras, but what else there is is great. There is also an isolated score track with composer Jonathan Elias in which his great Herb Alpert-esque track is given room to breathe as well as Elias interjecting in between the music. There are interviews with screenwriter Christopher Hawthorne who relates that Todd Solondz nearly directed the film, as well as Mary Beth Hurt, DP Robin Vidgeon describes his time on set and how he came to the project, and finally decorative consultant Yolanda Cuomo talks about her amazing work in designing the film to look like a '50s fantasy. All of these extras are really wonderful, I just wish there could've been a sit-down with Balaban apart from the commentary. 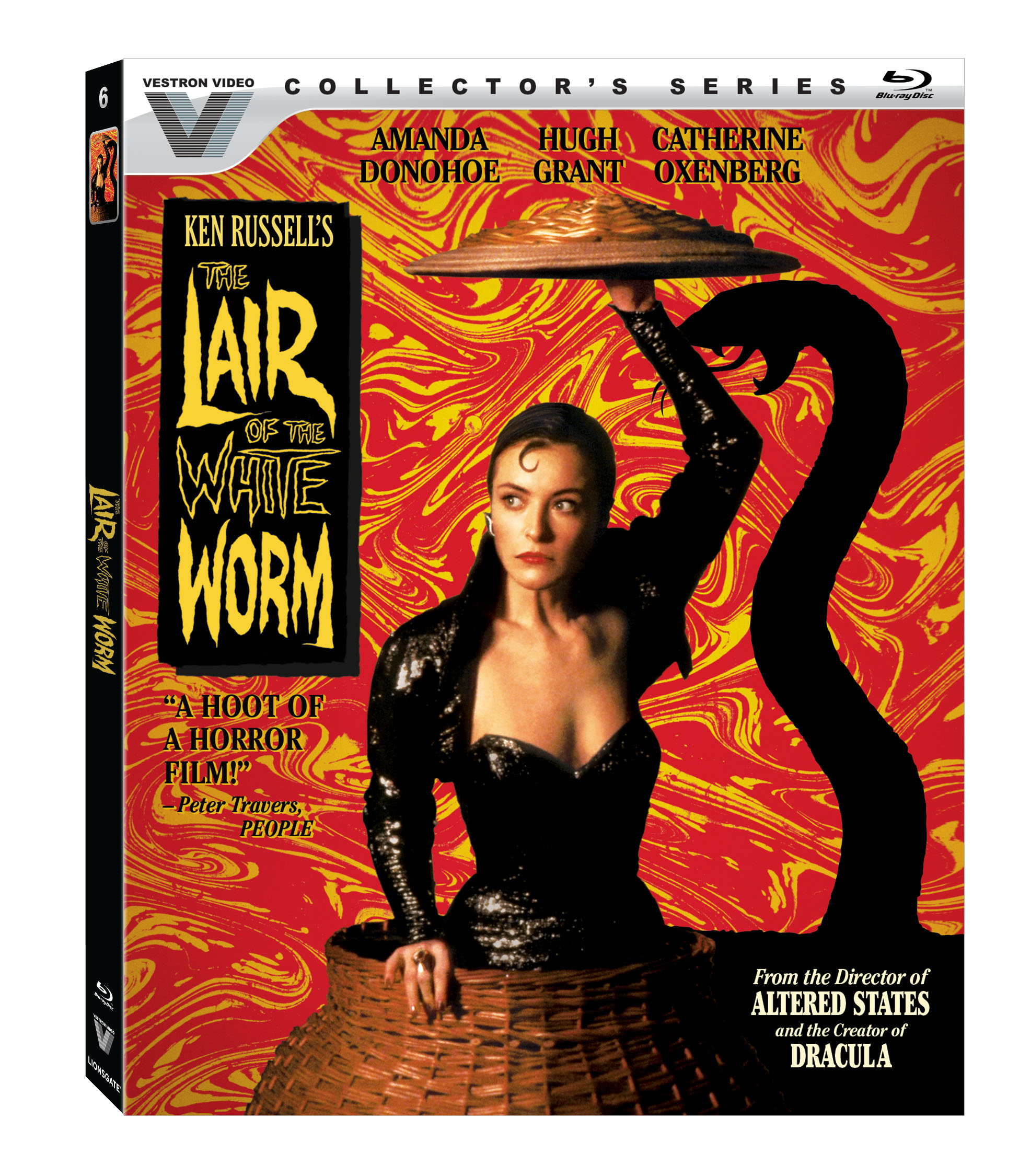 We all know that Ken Russell was a complete madman, and what greater proof is there than his adaptation of a Bram Stoker short story, The Lair of the White Worm. Russell directs a very young Hugh Grant, Catherine Oxenberg, Amanda Donohoe, and future Doctor Who Peter Capaldi in this crazy English pseudo folk horror tale for the ages. The Lair of the White Worm stands as one of Russell's most enduring films for me because it is just so completely daft and also because it was one of the films that was always on the shelves at all the video stores of my youth, with Amanda Donohoe begging me to come inside of her little basket as seen above.

Peter Capaldi plays Angus Flint, an archaeologist who has dug up something of interest. It appears to be the skull of a giant snake, but no one will believe him. He soon encounters James D'ampton, the lord of the local manor and landlord of the farm on which the skull was dug up. Local legend says that D'ampton's distant relative saved the lands from savagery by defeating the D'ampton work, a local dragon with a taste for virgins. When James' girlfriend disappears and a local vamp (Donohoe) shows up on the scene, everything starts to go pear shaped and James and Angus discover that may be that legend wasn't a legend after all.

Russell is a director with whom I'm only vaguely acquainted. Every film of his that I've seen I have enjoyed immensely, from his masterpiece The Devils, to this, to his even more insane soap opera religious sex terror Crimes of Passion, no one could ever accuse him of being boring. Of the small handful I've see, this is probably the most conventional, which is a strange thing to say because if it'd be made by any other director it would be considered an outlier in their filmography.

The Lair of the White Worm is never boring, and never for a moment takes itself too seriously. It knows that it is a goofy horror film designed to get butts in seats and show off a little T & A besides. In that role it acquits itself nicely. Russell can't help injecting his own particular brand of mania into the film via hedonistic dream sequences and religious sacrilege by the ton, and that only makes the film more exciting. While visually it hasn't aged terribly well, it's very inventive and stands as a great reminder of what a whacked out mind Russell had.

The Lair of the White Worm comes to Blu-ray from Vestron Video with a decent, but not great video presentation. The film looks solid, but doesn't quite make the jump to revelatory. There is nothing outwardly wrong with the transfer, but the colors feel muted and the level of detail isn't what one might expect from a new digital restoration. If I had to guess I'd say this was an older master struck for TV play, and it looks that way. The audio, however, shows no aging and dialogue, music, and FX come through nice and clear.

Lair presents us with a raft of bonus material to help provide context and a few laughs to the film via numerous anecdotes from those on the set. First up is an archival audio commentary from Russell himself which is as entertaining as one might expect. Next up is a second commentary with Ken's wife Lisi Russell and film historian Matthew Melia, which is equally informative if a bit more subdued.

Vestron also includes a trio of very impressive interviews. First up is a team interview with the FX crew on the film who recount tons of great stories of the challenges and rewards of working for Ken Russell. Actress Sammi Davis also appears in an interview in which she describes her experiences with Russell on and off set. Finally there is a great interview with White Worm's editor Peter Davies who talks about his relationship to Russell and what it was like to earn the man's respect. Last up is producer Dan Ireland with his Trailers From Hell entry on creating and realizing the film. There is just a ton of great material here.

The Lair of the White Worm is one of those crazy films that is impossible to forget, and this disc is a must own for any fan.

Do you feel this content is inappropriate or infringes upon your rights? Click here to report it, or see our DMCA policy.
Blu-rayBob BalabanKen RussellLair of the White WormParentsVestron

More about Lair of the White Worm