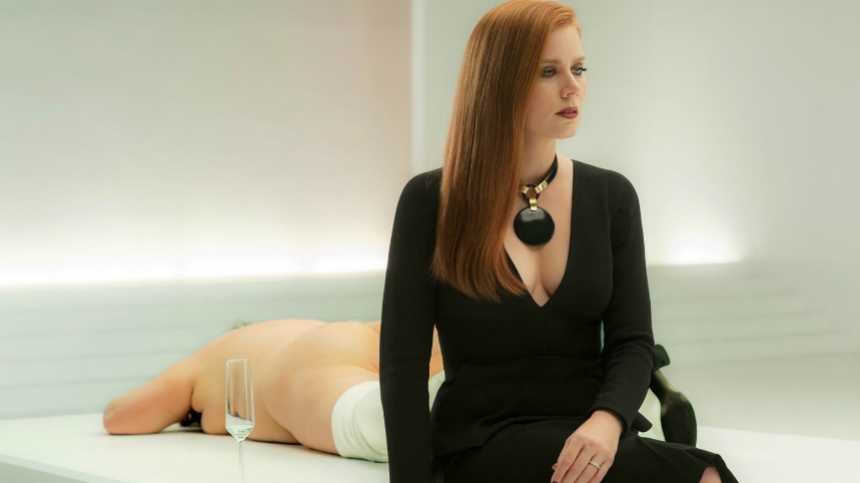 For the engaged cinephile, right from the opening credit sequence of Nocturnal Animals, there will be a sense of confidence that things here are in good hands.

Hyper-glossy and daringly uncommercial in the same breath, it puts some fine Lynchian bonafides on the table early. Then the camera pulls back from this tone-setting overture to reveal that these seemingly context-free images (which will remain unspoilt by me, but might prevent the film from playing in a multiplex near you) are very much present, and in fact are part of the gala launch of a Los Angeles art gallery.

The curator and architect of the exhibit (but, tellingly, not the artist) is Susan, played by Amy Adams in heavy make-up, and chunky jewelry. The deep lighting makes her red hair stand out like smoldering coals in the dark. Forget for the moment director Tom Ford's penchant for enhancing surfaces, Adams delivers an understated inner-performance entirely with her eyes and posture. Mere seconds on screen and you can immediately deduce she is unhappy with the not only the exhibit but with her many if not most of her life choices.

Later that evening, Susan is abandoned to stew in her own juices by her husband (Armie Hammer) who is the kind of high-stakes businessman that is required for a cross-continental flight upon a moment's notice. Nocturnal Animals is a film about how we process our thoughts when alone, versus reacting in the company of others.

It is also a master-class in 'show-don't-tell' filmmaking. A brief domestic conversation, prior to her husband's exit from the film, is practical and efficient. We learn that their glass and concrete mansion and designer lifestyle is on the verge of bankruptcy, but again, the body language and framing suggest that money, in and of itself, is the least of their problems, matrimonially.

The very same evening, Susan receives a package in the mail from her previous husband, whom she has not spoken to in nearly two decades. The manuscript of his soon-to-be published novel is included with a personal note thanking her for the inspiration (and life experience) provided finally write something significant. The book shares the name of the film, but the film is adapted from Austin Wright's 1993 novel, Tony and Susan.

Tony is the name of the character in the book that Susan reads, a man whose family is threatened and jeopardized on a lonely West Texas highway by a gang of good ol' boys led by an extraordinarily effective, and completely unrecognizable Aaron Taylor-Johnson, who has come a distance from Kick-Ass and wins the Tom Hardy award for chameleon-like disappearance into a part.

It is exceptional that Ford has made a film about a woman who spends the bulk of the runtime sitting on her couch (or bed, or in the bath) reading a book, into one of the most compellingly 'lean-in' films of the year. Half of the runtime is devoted to the novel, which is anchored by a Zodiac or Nightcrawler calibre performance from Jake Gyllenhaal. A scene-stealing Michael Shannon appears as a cancer stricken Texas Sheriff who is funny, and yet, simultaneously scared the absolute shit out of me. The remainder of the film split equally between Susan's languorous present, and flashbacks to her optimistic courtship with her first husband and youthful writer, Edward; also played by Gyllenhaal.

The cross-cutting and transitional matching shots (note a certain red couch, for instance) provide an invigorating road-map to what the movie is actually about. The editing in this film, the fimmaking in general, is among the best films of the year. And, it is in a genre, the psychological thriller, that is so radically absent, presently, that make this is a breath - a gale? perhaps a tempest - of gloomy air.

Bad things happen in Nocturnal Animals, and stylishly so. It is a fabulously blunt instrument paradoxically, yet exquisitely, used to extract subtleties of modern (material) compromise. It is appropriate that Jena Malone and Karl Glusman, who play key characters in Nicolas Winding Refn's The Neon Demon, appear here in cameos. These films are spiritual cousins in so many ways; all postmodern, smoggy, noir and demonstrative style as substance. It is all hall of mirrors stuff, life imitating art, imitating life, imitating art. I mean this in a good way.

There is an adult thrill to observing Susan's inner-life, her dreams and regrets, unfold, and autopsied, in abstract via Edwards' writing. Again, I point out the title of the source novel, which pairs Susan with the protagonist of the book, Tony (and not her former or current husband.)

The casting of Gyllenhaal in both roles underscores things, while Isla Fisher, who plays the wife in the story, has enough of a resemblance (the hair!) to further bind the core structure of the film. Watching Adams essay the crumbling of Susan's sang froid facade is as engaging as the more visceral elements in the book she is reading. It is critical that she is both alone, and operating in hindsight. Miraculous, in fact.

The consequences of what happens in the novel, and what carries on after Susan sets things down will not be revealed here, of course, but suffice it to say that the film sticks the landing with precision and no shortage of savage grace.

Review originally published during the Toronto International Film Festival in September 2016. The film will open in select theaters in Canada and the U.S. on Friday, November 18, via Focus Features.

Do you feel this content is inappropriate or infringes upon your rights? Click here to report it, or see our DMCA policy.
Aaron Taylor-JohnsonAmy AdamsJake GyllenhaalMichael ShannonTom Ford